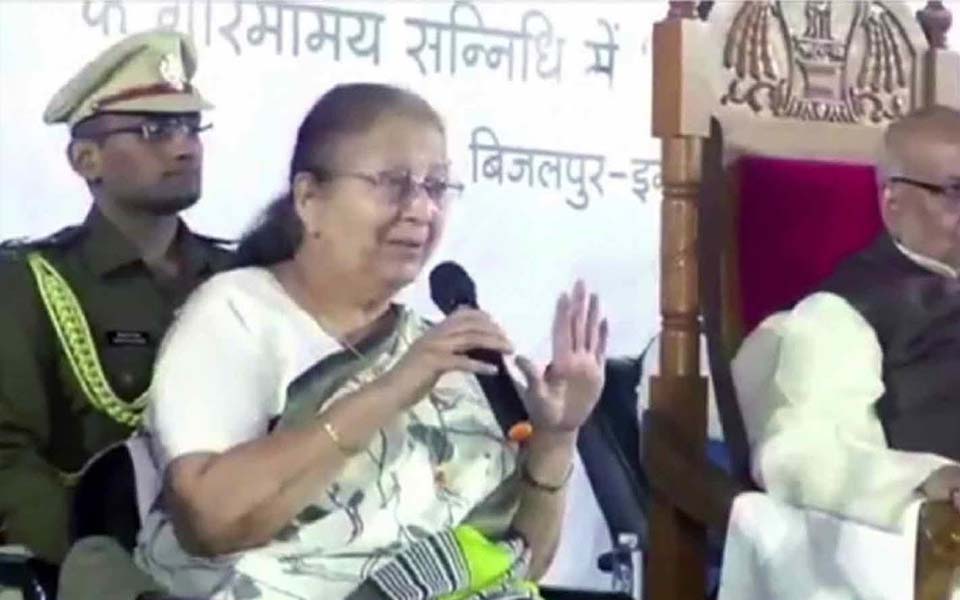 Indore, Dec 2: In a candid admission, former Lok Sabha speaker and ex-Indore BJP MP Sumitra Mahajan said she took the help of Congress leaders for issues concerning the development of her constituency in order to mount pressure on the then Shivraj Singh Chouhan government in the state.

She went on to claim she could not raise issues of public interest several times when her own party's government was in power in MP as she was "tied down by discipline".

The Congress unseated the BJP after 15 years in the Assembly polls late last year.

"I could not raise issues of public interest many a times during the previous BJP government in MP. Then, in hush hush manner, I used to tell them (Congress leaders) to raise such issues, promising them I will ask (then) Chief Minister Shivraj Singh Chouhan to do the needful," Mahajan said at a function on Sunday night.

"We rise above party politics when we set forth for Indore's development," the eight-time former MP, who was denied a ticket in the April-May Lok Sabha polls as she had crossed 75 years of age, added.

"I was tied down with (party) discipline so could not publicly speak against the previous state government," she said, adding that Congress leaders kept their word during such times.

"The former MP's words should be taken in the right spirit. Tai (as Mahajan is popularly known) always thought of Indore region's progress, and that leaders cutting across party lines should be a part of it," Silawat said on Monday.

All villages to be connected with optical fibre in next 1,000 days: PM Modi

New Delhi: Prime Minister Narendra Modi on Saturday announced that the project to connect India's over six lakh villages with optical fibre network will be completed in the next 1,000 days.

Besides, a high speed internet connectivity via submarine optical fibre cable will be extended to Lakshadweep in this period, he said.

In his address to the nation on India's 74th Independence Day, he pointed out that only five dozen panchayats in the country were connected with optical fibre cable by 2014, the year his government came to power for the first time.

He also announced that a new policy on cyber security will be unveiled shortly, saying the nation's dependence on the cyber world has increased in the changed circumstances, an apparent reference to the upheavals brought in by the COVID-19 pandemic, and that this has spawned its own dangers to development and economy.

He said the country is witnessing expansion of roads and internet at unprecedented and rapid speed, from the peaks of Himalayas to islands in the Indian Ocean.

Modi recently inaugurated the first ever undersea optical fibre cable project for Andaman and Nicobar Islands which will provide high speed broadband connections in the union territory at par with services in the mainland.

He had laid the foundation for 2,312-km Chennai-Andaman and Nicobar Islands (CANI) connecting submarine optical fibre cable project on December 30, 2018.

"Our country has more than 1300 islands. Work is on to start new development projects in some select islands, considering their geographical locations and importance in the the nation's development," he said.

"Road network and Internet connectivity is now expanding at an unprecedented pace; be it in Himalayas or Indian Ocean islands," he said.

Enhanced digital connectivity has proved to be of big help, especially in including villages in India's development journey, he said. Our priority has changed with circumstances, the prime minister said, outlining his government's focus to boost cyber connectivity.

Referring to the digital India, he said the importance of the mission has been realised during the COVID-19 pandemic.

"In the last month only, transactions worth about Rs 3 lakh crore took place through BHIM UPI alone," he said. During the lockdown period, digital transactions witnessed a huge surge.

The number of people in India who have recuperated from COVID-19 went past 18 lakh on Saturday with a record 57,381 patients discharged in 24 hours pushing the recovery rate to 71.61 per cent, according to the health ministry data.

The forces that succeeded in setting fire on Bengaluru by posting inflammatory comments on social media tried to repeat it in Sringeri only to get their fingers burnt. This incident has revealed the Sangh Parivar’s systematic conspiracy to disturb peace and social harmony.

Prime Minister Narendra Modi on Saturday said the government is deliberating on what should be the minimum age of marriage for women and has set up a committee to look into the matter.