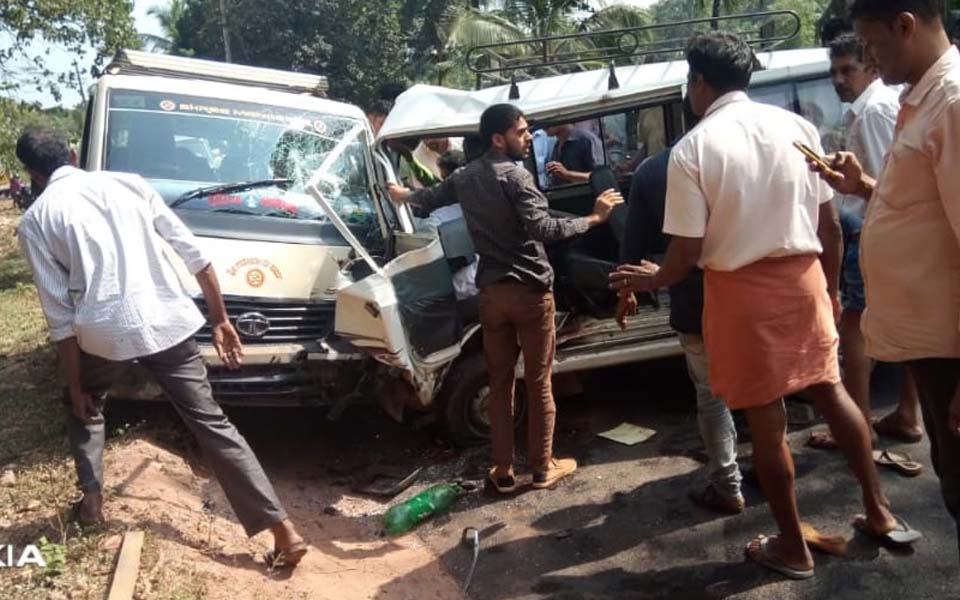 Vittla: In a tragic road accident reported from Kodangayi near Radukatte in Vittla, seven persons including women and children sustained injuries when a Maruti Omni and another vehicle collided here on Tuesday afternoon.

According to the reports, the Omni car was heading towards Vittla from Salethur when it collided with Venture car coming from the opposite direction. The injured victims were taken to a hospital in Deralakatte for treatment. New Delhi: Prime Minister Narendra Modi on Saturday said the government is deliberating on what should be the minimum age of marriage for women and has set up a committee to look into the matter.

Addressing the nation on India's 74th Independence Day from the ramparts of the Red Fort, Modi covered a range of issues related to women, including their role in the armed forces, economic empowerment, the effort to recruit them in the NCC and the government's scheme to provide sanitary napkins at Re 1.

We have set up a committee to deliberate on the minimum age for marriage of our daughters. We will take appropriate decisions after the committee submits its report, he said.

The minimum age of marriage for women is 18 years and 21 for men.

Discussing the role of women in the forces, the prime minister said India is among the countries of the world where women are involved in combat roles in the Navy and the Air Force.

He added that women could comprise one-third of the one lakh new NCC cadets who will be given special training.

"We are expanding NCC in border areas; special training will be provided to about one lakh new NCC cadets, out of which we will try that one-third of them are our daughters," he said.

On the economic empowerment of women, Prime Minister Modi said 22 crore of the 40 crore jan dhan accounts are of women and about Rs 30,000 crore have been deposited in their accounts during the pandemic.

"Out of Mudra loans worth Rs 25 crore, 70 per cent of them have been taken by our mothers and sisters. Under the Pradhan Matri Awaas Yojna, most registrations are under the name of women," he added.

Under the Pradhan Mantri Jan Aushadhi Kendra scheme, the prime minister said, the government has started giving away sanitary napkins at Re 1 to empower women and also to keep their health in check.

In 6,000 Jan Aushadi Kendras, more than five crore sanitary napkins have been provided to women in a short period of time, he said. Modi also said his government is determined to provide equal employment opportunities to women.

Whenever women have been given an opportunity, they have made India proud and strengthened the country. Today, the nation is determined to provide equal opportunities for self-employment and employment to them, Modi said.

Today, women are working in underground coal mines as well as touching the sky while flying fighter planes, he noted.

An earthquake of 3.1 magnitude with epicentre near Koyna dam in Maharashtra's Satara district was recorded on Saturday morning, officials said.

The Congress on Saturday asked why those sitting in power are scared of naming China which has entered Indian territory, and said every Congress worker and every Indian is proud of the armed forces.

Ms Dania Hassan, daughter of Dr. Syed Hassan becomes the only student from east coast region to be honoured with 'Her Highness Sheikha Fatima Bint Mubarak award for excellence' for the year 2020.