Border security vital to both America and India: Trump says in presence of PM Modi at 'Howdy, Modi' 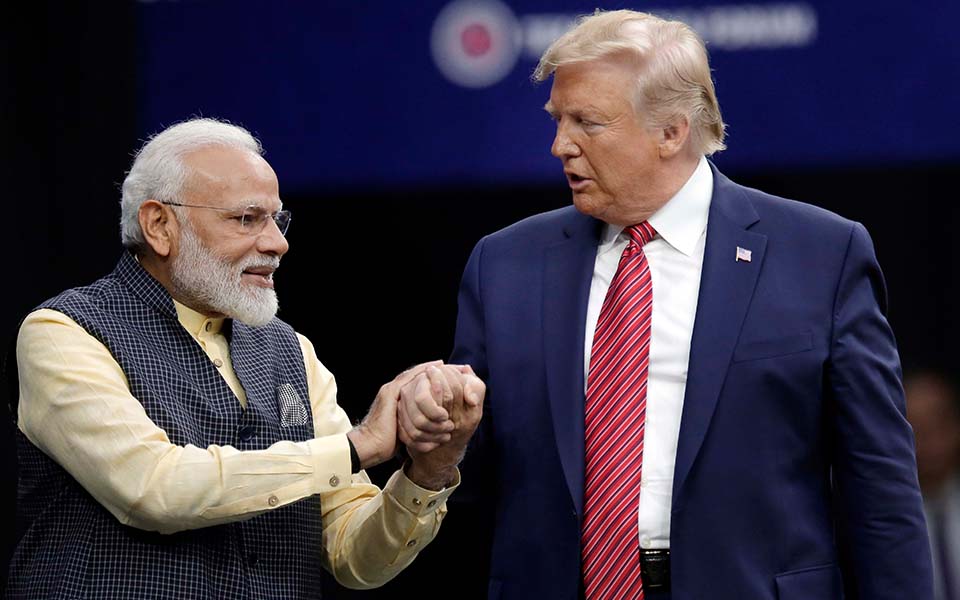 Houston, Sep 22: US President Donald Trump on Sunday vowed to protect innocent civilians from the threat of radical Islamic terrorism and said border security is vital to both America and India as he emphasised on bolstering further the Indo-US security relationship.

Addressing a record crowd of 50,000 Indian-Americans at the 'Howdy, Modi' event at the packed NRG stadium in Houston in the presence of Prime Minister Narendra Modi, Trump said the two countries will soon sign several defence deals to bolster their relationship.

"We are committed to protect innocent civilians from the threat of radical Islamic terrorism," the US president said.

India accuses Pakistan of providing safe haven to the terror groups, which carry out attacks in the neighbouring countries.

"We are further taking unprecedented action to secure our southern border (with Mexico) and stop illegal immigration," Trump said, to cheers.

During his nearly 25-minute speech, Trump praised Modi's economic reforms and said these reforms have lifted more than three million people out of poverty. "And that is an incredible number," he added.

"In both India and the US, we're seeing something remarkable: Our people are prospering like never before because we are slashing bureaucracy and cutting red tape," Trump said.

He then praised his own administration's economic record, which he said includes 70,000 new Texas manufacturing jobs.

"Unemployment in Texas is currently at the lowest rate ever recorded in the history of our country, and unemployment in the United States has just reached the lowest level in over 51 years," he said.

He said that over the last two years, unemployment among Indian-Americans dropped by one-third, Trump said.

Noting that the US is the No. 1 producer of oil and natural gas on the planet, Trump said he was thrilled to hear about the Indian company's pledge to purchase up to 5 million tonnes of LNG a year from the US, which could lead to billions of dollars of LNG exports to India in the coming years."

"India has never invested in the United States like it's doing today," Trump said, "and I want to say, it's reciprocal, because we're doing the same in India."

Trump said that in November the US and India will demonstrate dramatic progress of their defence relationship, holding the first-ever trilateral-service military exercise between our nations - 'Tiger Triumph'.

"Prime Minister Modi and I have come to Houston to celebrate everything that defines the India-America relationship," Trump said.

He described Modi as "a great man, a great leader and my friend."

The US president also praised the contributions of the Indian-Americans, saying they have enriched "our culture and uplifted our values. We are proud to have them as Americans." 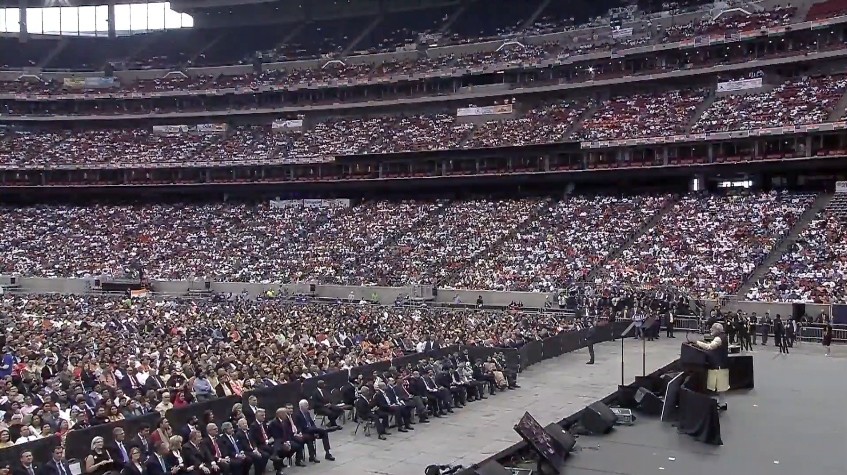 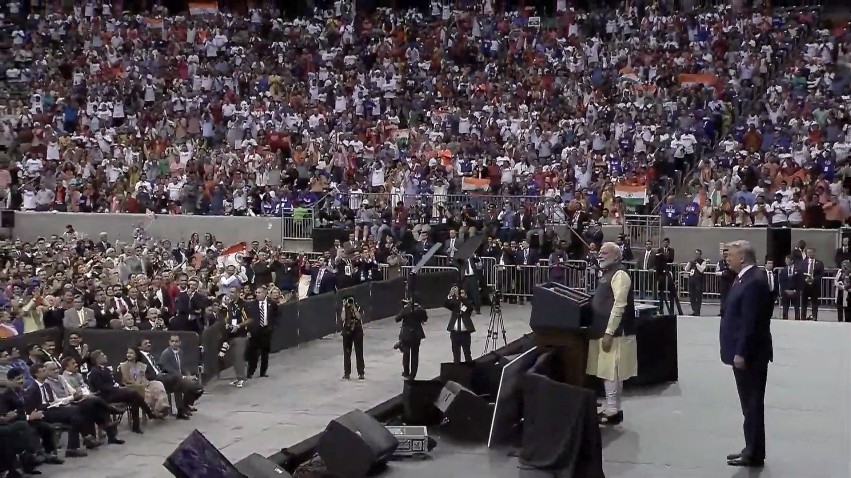 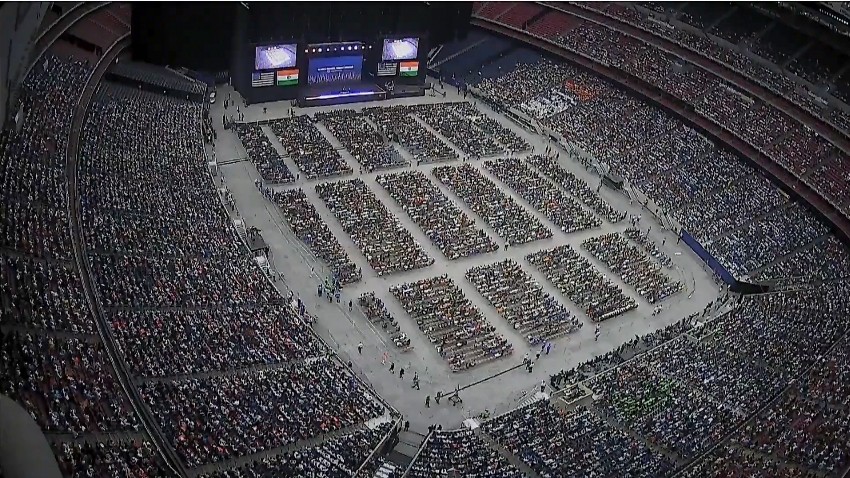 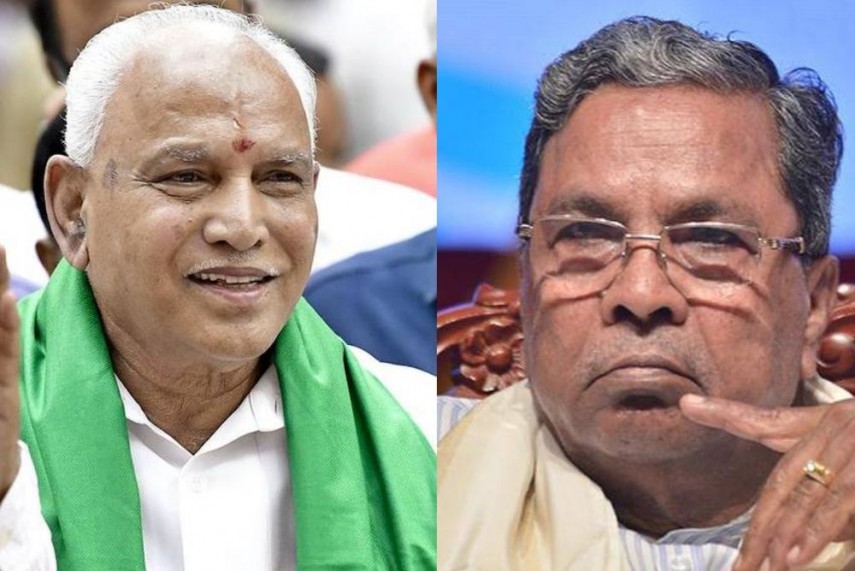 Bengaluru: The Congress and JD(S) in Karnataka have opposed the move to name a flyover in the city after Hindutva ideologue Veer Savarkar, and termed it as an insult to freedom fighters of the state.

The 400 metre long flyover, which according to sources have been constructed at a cost of Rs 34 core, is scheduled to be inaugurated by Chief Minister B S Yediyurappa on Thursday, which happens to be Savarkar's birthday.

Leader of Opposition and Former Chief Minister Siddaramaiah termed the move to name the flyover after Savarkar as an insult to freedom fighters from Karnataka's soil and urged Yediyurappa to drop it and instead name it after a freedom fighter from the state.

In a tweet, he said "The hasty decision to name Yelahanka flyover after Savarkar is an evidence to say that the administration is not run by an elected government, but by those behind the screen.

Chief Minister are you seeking opposition cooperation for such anti-people decisions?"

Another former Chief Minister and JD(S) leader H D Kumaraswamy said the decision was an insult to those who fought for the prosperity of the state and it was not right on the part of the government to do so.

"There are several eminent personalities who fought for the development and welfare of the state both before and after independence, flyover could have been named after them.

Have other states named things after freedom fighters from the state? I urge the state government on behalf of the people to step back from the decision," he tweeted.

According to sources, the decision to name the flyover at Yelahanka after Veer Savarkar was taken at the Bruhat Bengaluru Mahanagara Palike (city civic body) council meeting on February 29.

Defending the move, Yelahanka MLA S R Vishwanath, who is also the political secretary to Chief Minister said, there was nothing wrong in naming the flyover after a freedom fighter who was jailed and suffered punishment at Kala Pani (erstwhile Andaman jail) punishment for the sake of the country.

He said legally as per rules BBMP council has approved it and all formalities have been completed and only after that the naming has been planned.

Vishwanath termed the attempt to create controversy over naming the flyover after Savarkar as insult to freedom fighters, adding that several projects and bridges in his constituency have been named after eminent personalities of the state and the county and this was one such move.

Rejecting his contention, Congress said naming of the bridge after Savarkar was taken, despite opposition, and questioned Savarkar's contribution to Karnataka and Bengaluru.

The Congress and other opposition parties had earlier vehemently opposed the move to confer Bharat Ratna on Savarkar, posthumously.

While the BJP counts on his contribution to India's freedom movement and calls him a "great patriot", the Congress and other opposition parties have long shunned him for his alleged link to Mahatma Gandhi's assassin.

He was acquitted of the charge but his hardline Hindutva views long made him a pariah for the secular establishment.

Kasargod: Two brothers who went down a well to rescue calf, die of suffocation

Kasargod: In a tragic incident, two brothers who went down into a well to rescue a calf which had fallen into it, died of suffocation on Wednesday at Paivalike in Kasargod District here.

SJEC, Wipro come together to host a Webinar “Preparation for the Next Normal" for BE Students

Mangaluru: In the present day scenario of life amidst COVID-19, it is becoming extremely important to realize the way industries are reacting to this situation and learn the requirements to be the choice of the employers.

Against the backdrop of the recent political activities in Maharashtra and with just a few remaining for the fourth phase of the lockdown to end, state Chief Minister Uddhav Thackeray on Wednesday held a meeting of key leaders of the ruling Maha Vikas Aghadi (MVA).