Modi wanted us to work together, I rejected his offer: Sharad Pawar 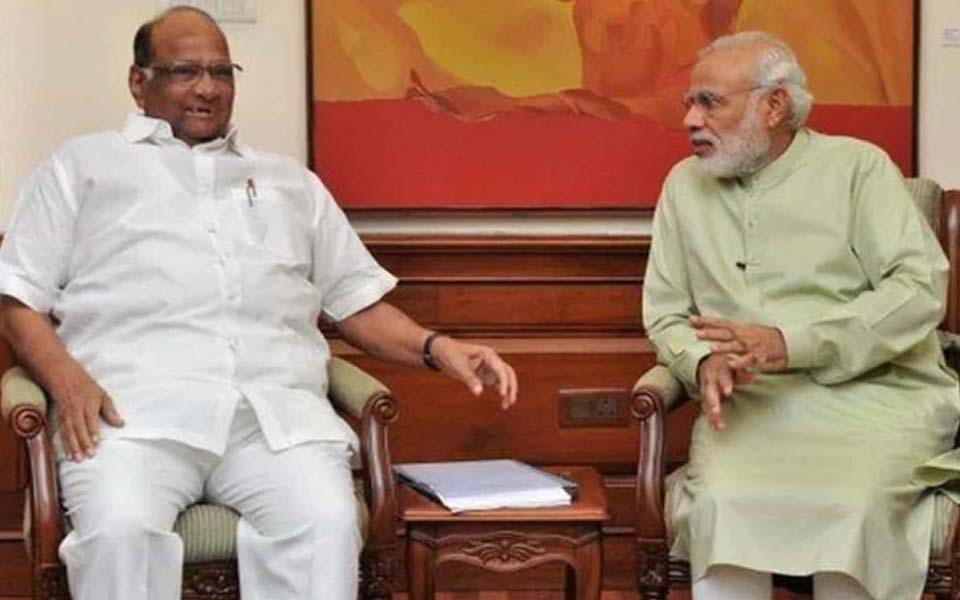 Pawar said he made it clear to Modi that it won't be possible for him to work together with the PM.

"Modi had offered me to work together. I told him that our personal relations are very good and they will remain that way but it is not possible for me to work together," Pawar said in an interview to a Marathi TV channel on Monday.

Pawar dismissed reports that Modi government offered to make him India's President. "But there was an offer to make Supriya (Sule) a minister in the Modi-led cabinet," he added.

Supriya Sule is Pawar's daughter and a Lok Sabha member from Baramati in Pune district.

Pawar had met Modi in Delhi last month amid dramatic developments over government formation in Maharashtra.

Modi has always praised Pawar and made it a point not to launch a vicious attack against him during the state election campaign.

Modi's latest praise for Pawar came last month when he was speaking on the occasion of 250th session of the Rajya Sabha. Modi said other parties, including the BJP, should learn from the NCP on how to adhere to parliamentary norms.

In 2016, when Modi visited the Vasantdada Sugar Institute in Pune on an invitation from Pawar, he had praised the NCP chief as an example to others in public life.

"I have personal respect for Pawar. I was the Gujarat chief minister that time. He helped me walk by holding my finger. I feel proud to pronounce this publicly," Modi had said.

Pawar also said not swearing in Ajit Pawar when Uddhav Thackeray took oath as CM on November 28 was a "conscious decision", prompted by the NCP leader's sudden support to Devendra Fadnavis, who became CM only to quit three day later after Ajit Pawar resigned as deputy CM.

Thackeray took over as chief minister over a month after Assembly poll results were declared on October 24.

"When I came to know about Ajit's support (to Fadnavis), the first person I contacted was Thackeray. I told him what happened was not right and gave him confidence that I will crush this (Ajit's rebellion)," Pawar said.

"When all in NCP came to know my support was not there for Ajit's action, those five-ten (MLAs) who were with him, there was pressure on them," he said.

The NCP chief said he is not aware if anyone in the (Pawar) family spoke (to Ajit Pawar to make him rethink his decision to back Fadnavis). "But all in the family felt what Ajit did was wrong," he said.

"I later told him what he did was unpardonable. That anybody (doing so) will have to bear the consequences and you are no exception," he said.

"At the same time there is a big section (in NCP) which has 'asthaa' (faith) in him... He gets things done," Pawar said.

Kozhikode: The Kerala government on Saturday announced Rs 10 lakh compensation to the families of those who died when an ill-fatedAir India Express flight veered off the runway while attempting to land at the Karipur international airport here.

At least 18 people have lost their lives and 149 are under treatment at various hospitals of Malappuram and Kozhikode districts, Chief Minister Pinarayi Vijayan told the media after a high-level meeting held at the district in which state Governor Arif Mohammed Khan also participated.

The CM also said out of the 18 who died, 14 are adults and four are children. "Out of the 14 adults, seven are male and others female.

Currently, 149 people are in various hospitals of Malappuram and Kozhikode, out of which 23 are in critical condition. Earlier, 23 were discharged after being provided initial medical assistance," Vijayan said.

The black box of the ill-fated Air India Express flight that could throw light on how it overshot the runway here and crashed has been recovered while the toll in the mishap rose to 18 on Saturday with a passenger succumbing to injuries, officials said.

New Delhi: Prime Minister Narendra Modi will on Sunday launch a financing facility of Rs one lakh crore under the Agriculture Infrastructure Fund. He will also release the sixth instalment of funds of Rs 17,000 crore to 8.5 crore farmers under the PM-KISAN scheme, an official statement said on Saturday.

At least 20 bodies have been recovered so far from the debris of the landslides that flattened a row of 20 houses of tea estate workers in the high range Idukki district in Kerala, as efforts were underway amid continuing rains to locate those missing.