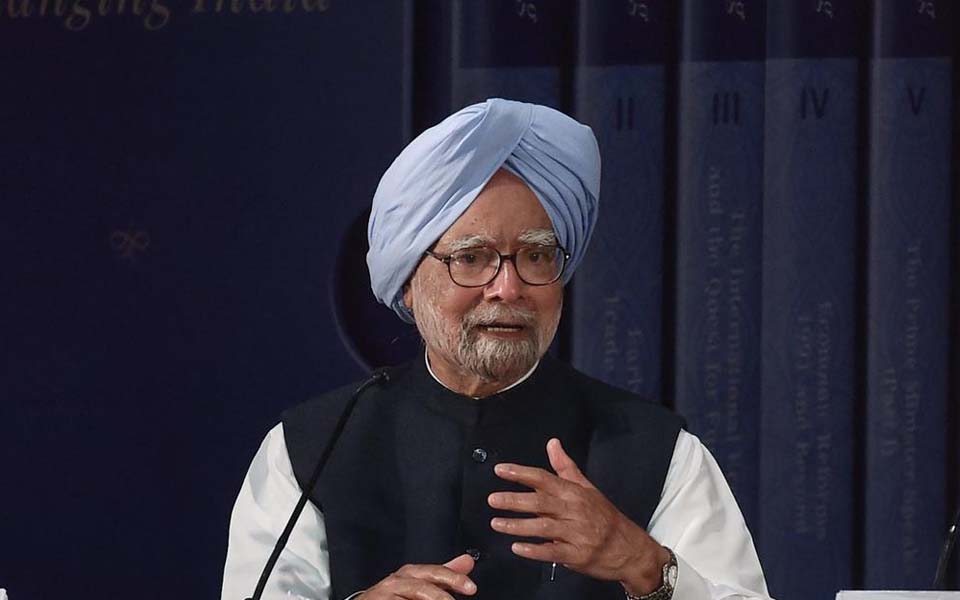 Chandigarh, Nov 8: Former Prime Minister Dr Manmohan Singh here on Friday stressed the need for unity of thought and action, saying it was required now more than ever.

"More than any other period of human history, the need for unity of thought and action today is the most urgent," said the former PM speaking on the concluding day of an international conference on Guru Nanak Dev by the Centre for Research in Rural and Industrial Development (CRRID) here.

"When the world is breaking up into fragments, and fragments clash with fragments, surrendering all sense and purpose of living for the larger humanity, it is the humanity which seeks transcendence from narrow limits and boundaries," Singh stressed.

Saying that today's world was beset with violence and rejection, the former PM said the humanity needed to provide succour to the people "ejected from their land and hearth".

The former prime minister also called for an alternative model of society based on truth, gender equality, protection of the environment and universal responsibility due to serious challenges posed by unchecked exploitation of natural resources, growing race for arms, continued exploitation of the poor by the rich and growing environmental degradation.

"For a lasting peace in the turbulent world that we live in, let me conclude by offering a prayer from the Guru Granth Sahib: This world is burning O' Lord, show thy mercy, thy grace and save it through whatever door thou can," said Singh.

Earlier, speaking on the Sikhism founder he said, "Guru Nanak Dev ji's hymns contained in the Guru Granth Sahib show that India at that time was passing through a period of civilisational conflict."

"Fortunately, the wise and women from different faiths joined together for the cause of peace and love, which resulted in the formation of the Bhakti and Sufi movements," he added.

He said Guru Nanak demonstrated his concern for the poor and needy at an early age when he was given Rs 20 by his father for a profitable business.

Instead, he purchased food for hungry sadhus and began the institution of langar (free community kitchen), where food was served to all without any distinction of high and low, he said.

Speaking on the stay of the Guru at Sultanpur Lodhi, where he got enlightenment on the banks of the Kali Bein, Manmohan Singh said, "It is important to note that the first words the Guru uttered after his enlightenment were 'na koi Hindu, na Koi Musalman', clearly indicating that his mission was to unite humanity."

The former PM said the Guru's teachings could be summed up in three Punjabi words--naam japna, kirat karna and wand chhakna (meditation, hard and honest labour, and sharing fruits of one's earnings with others).

Besides, the GoM was told that six states -- Maharashtra, Delhi, Gujarat, Tamil Nadu, Uttar Pradesh and West Bengal -- account for 86 percent of the deaths caused by COVID-19 and 32 districts account for 80 percent of such fatalities, the Union health ministry said.

The GoM, which held its 18th meeting under the chairpersonship of Union Health Minister Harsh Vardhan on Thursday, was informed that there was a special focus on the regions showing a higher COVID-19 fatality rate, the ministry said. The GoM was also briefed on the current COVID-19 status in India.

"A global comparison between the five most-affected countries clearly depicted that India has one of the lowest numbers of cases per million (538) and deaths per million (15), compared to the global average of 1,453 and 68.7 respectively," the ministry said in a statement. Within the country, eight states -- Maharashtra, Tamil Nadu, Delhi, Karnataka, Telangana, Andhra Pradesh, Uttar Pradesh and Gujarat -- account for around 90 percent of the active coronavirus cases, it said.

As regards the COVID-19 healthcare infrastructure in India, the GoM was informed that as on Thursday, there were 3,914 facilities across the country with 3,77,737 isolation beds (without ICU support), 39,820 ICU beds and 1,42,415 oxygen-supported beds, along with 20,047 ventilators.

Over 21.3 crore N95 masks, 1.2 crores personal protective equipment (PPE) kits and 6.12 crore hydroxychloroquine tablets have so far been distributed, the GoM was told.

"As we move forward, our focus shall be on the management of COVID-19 through strict containment measures and surveillance, utilising the full testing capacity, monitoring of the co-morbid and elderly population, predicting the emerging hotspots, leveraging digital tools such as Aarogya Setu, ensuring seamless patient admission processes and infrastructure preparedness (critical-care beds, oxygen, ventilators and logistics)," Vardhan said.

"Along with the states and Union territories, our aim is to reduce and keep the case fatality rate low by early identification and effective clinical management," he was quoted as saying in a statement issued by the ministry.

During Unlock 2.0, the future steps would include a sharp focus on containment and surveillance, including demarcation of containment zones and notifying such areas on the health ministry website.

It includes strict perimeter control with only essential activities allowed, intensive contact-tracing, house-to-house search or surveillance and buffer zones to be identified outside the containment zones.

The focus was on a strict containment strategy and surveillance through SARI/ILI cases, serological survey and enhancing the laboratory network for testing.

The major concern areas in the country were highlighted and the measures to be taken listed, including timely clinical management, along with testing and surveillance in the high-risk population with co-morbidities, to reduce the case fatality ratio.

The group received 6,755 alerts of fake news, of which 5,890 were replied to directly and rebuttals published to 17 foreign media stories. The group also coordinated the issue of 98 daily COVID-19 bulletins, 92 media briefings and 2,482 press releases.

The group played a pro-active role in the behavioral change campaign during the pandemic and creating awareness regarding the relief measures among farmers and MSMEs under the "Atmanirbhar Bharat Abhiyan" launched by Prime Minister Narendra Modi, the ministry said.

It was highlighted that the mental health issues related to the COVID-19 pandemic will be a major part of the communication strategy going forward through discussions in the media, the ministry said.

There was also a special focus on dissemination of messages and information in regional languages, it added.

India saw a record single-day surge of 24,879 coronavirus cases on Thursday, which pushed the country's COVID-19 tally to 7,67,296, while the death toll due to the disease climbed to 21,129 with 487 new fatalities, according to the health ministry data updated at 8 am. 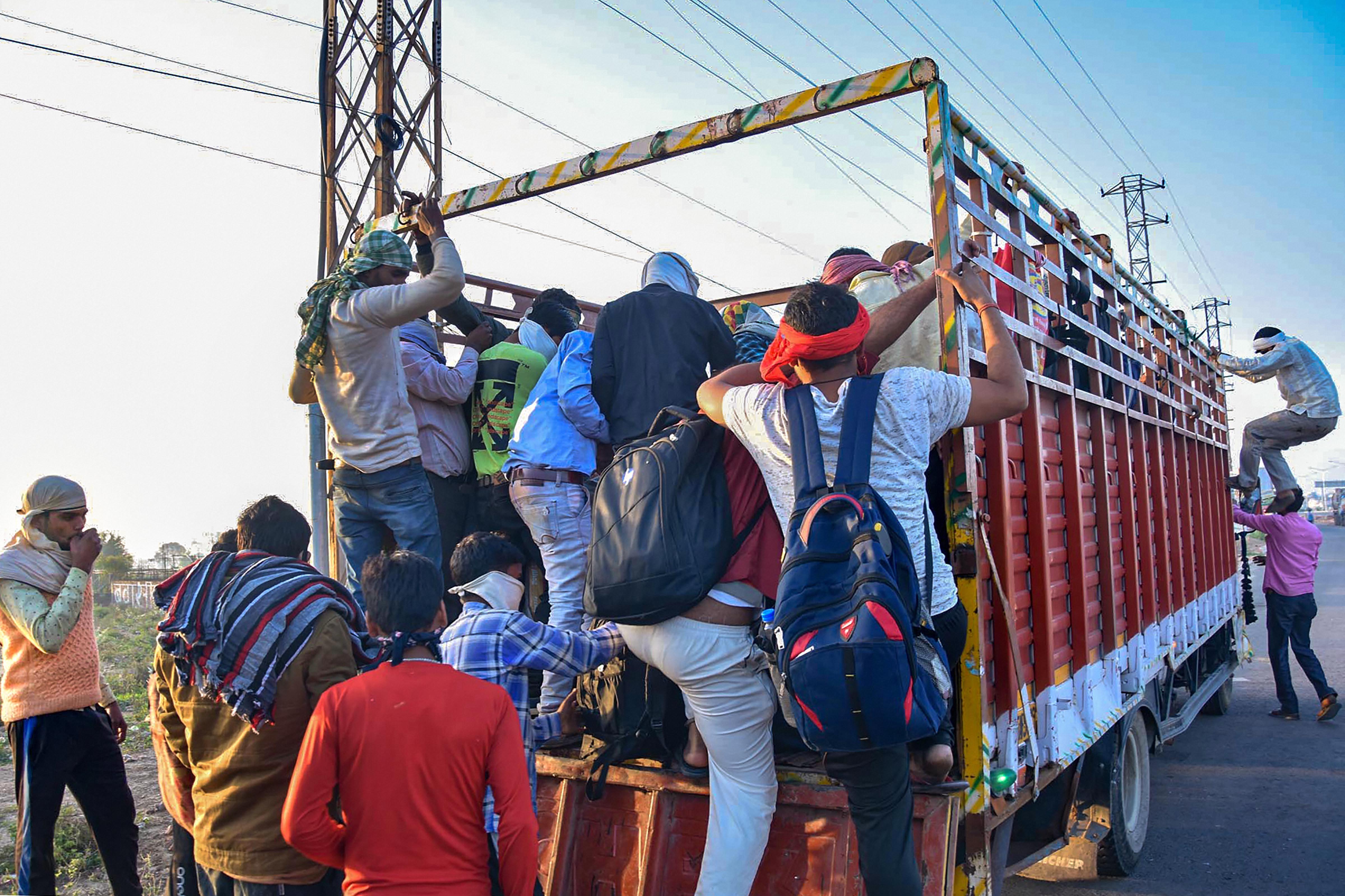 The Supreme Court Thursday pulled up the Maharashtra government on the migrant worker's issue and refused to accept its claim that there was no problem in the state on this front, saying it is its duty to find out the lapses and act on them.

Karnataka: Ministers to be appointed as in-charge for each zone in Bengaluru for COVID management

Amid a spike in COVID-19 cases in Bengaluru, Chief Minister B S Yediyurappa on Thursday decided to appoint ministers as in-charge for each zone in the city, aimed at effectively managing the pandemic.