TCS founder, 'Father' of Indian IT industry F.C. Kohli passes away at 96 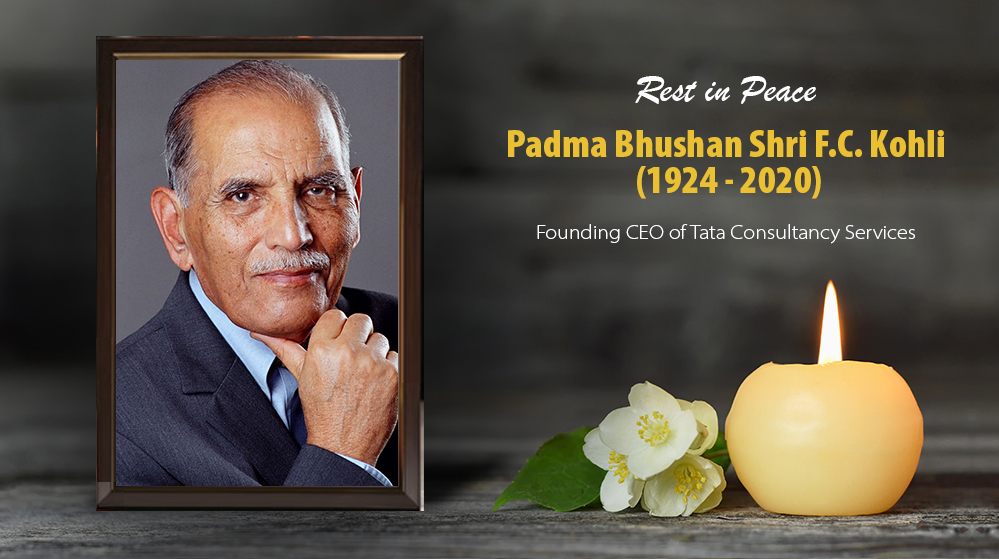 Mumbai, Nov 26: Fakir Chand Kohli, the founder and the first CEO of Tata Consultancy Services (TCS), passed away on Thursday after reportedly suffering a heart attack. He was 96.

A recipient of the Padma Bhushan, Kohli is called the 'Father of Indian IT Industry' and is credited for pioneering the technology revolution in India.

Mourning the passing of Kohli, TCS, in statement, noted that Kohli joined the company in 1969 at the behest of J.R.D. Tata.

He pivoted the first into management consultancy, and then over the next two decades, into software development, helping the organisation navigate multiple technology waves over two and a half decades by continually investing in people and staying relevant to customers, it said.

Kohli stepped down as TCS' CEO in 1996 and continued to play an active role in promoting technology to solve the country's social problems.

Tata Sons Chairman N. Chandrasekaran said: "I am deeply saddened by the news that Mr F.C. Kohli passed away this afternoon. He was a true legend, who laid the very foundations for India's spectacular IT revolution and set the stage for the dynamic modern economy we enjoy today."

"I have had the honour and privilege of working with and learning from Mr. Kohli from the day he hired me as a trainee in TCS. Despite his momentous achievements, his simplicity and thoughtfulness is a lesson for us all. His enduring optimism and his ability to make ambitious bets leaves a legacy - one that has advanced a nation," Chandrasekaran said.

TCS CEO and Managing Director Rajesh Gopinathan described Kohli as a true visionary, showing amazing foresight in harnessing the rich engineering talent available in India to create an entire new industry that defied all odds and grew to be a global powerhouse.

TCS' former CEO S. Ramadorai said that Kohli was a brilliant technocrat and a business leader with varied interests. He was passionate about the development of the nation and its youth, he added.

Industry body NASSCOM said: "A true visionary and the father of the Indian software industry - FC Kohli will always be remembered for his pioneering contributions to the sector and remarkable leadership at NASSCOM. Our condolences to his family."

Kohli was born in Peshawar, where he did his schooling and did his college-level education in Lahore.

He later went to Queen's University, Canada and completed B.Sc (Hons) in Electrical Engineering in 1948 and did his MS in Mechanical engineering from the Massachusetts Institute of Technology in 1950.

Shri FC Kohli Ji will be remembered for his pioneering contributions to the world of IT. He was at the forefront of institutionalising a culture of innovation and excellence in the tech industry. Pained by his demise. Condolences to his family and many admirers.

We mourn the passing of Padma Bhushan Shri FC Kohli, the Father of Indian IT Industry, and the first CEO of TCS.
To read the full statement, click here: https://t.co/M6kYZw42Xc pic.twitter.com/Uwjb7zJkx2