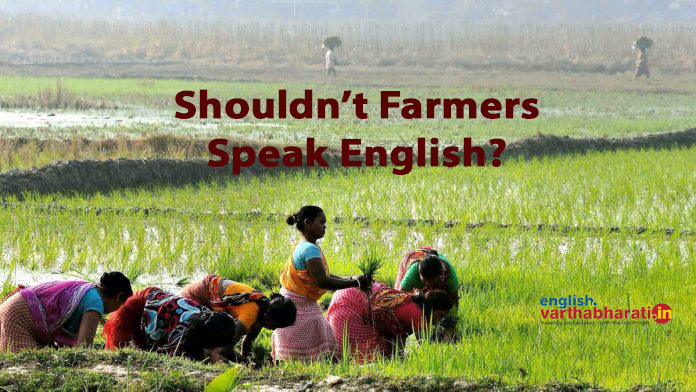 To go beyond the identities emanating from his caste, Ambedkar projected a suit-clad identity. Similarly, to get over his upper caste-identity, Gandhi shed his suit and started wearing loin cloth. Even today, upper castes consider as an affront to them if Dalits lead a life of respect and dignity. Such attitudes lead to attacks on Dalits if they use a horse during a wedding or even move around in bikes before upper caste people. Narayana Guru wrote in Sanskrit not because of his love for the language but to prove to upper castes that Shudras can also learn Sanskrit. Kuvempu wrote his epic book as an act to spite the attitude of superiority among upper caste poets.

All the above incidents relate to caste and community. The ongoing farmers’ protest around Delhi have revealed that such attitudes also exist towards farmers in this country. The Centre and Sangh Parivar are using different methods to suppress farmers’ protests.

The government used police force; it also spread the fear of the Coronavirus. It went to the extent of digging roads and trenches to stop the farmers. But when the farmers fought all odds and reached Delhi, it alleged that the protestors were not farmers at all.

A few of them owned vehicles. Revealing his stupidity, a journalist was seen asking the protestors ‘if you are farmers, how can you speak English’? But that begs a few fundamental questions - why can’t a farmer in this country wear Jeans? Or own a vehicle? Or speak English? Is this because all these rights are owned only by those in the IT, BT sector or corporate honchos and their followers and no one else? As the government also holds the same attitude, it has come forward to implement laws that practically hand over the lives of farmers to corporates.

Four decades ago, primary school texts had a poem titled ‘annadaata’ which portrayed the pathetic life that that farmers lived. Even today, the word farmer brings to mind the sad, skeletal visual of a person, ploughing the field. We have a deep-rooted belief that farmers exist only to be exploited.

Similarly, middle-men, brokers in the market, and politicians believe that it is their right to exploit farmers. No wonder then while farmers grow crops, others reap dividends and become rich based on the farmers produce.

When those manufacturing liquor or cigarettes that are not essential for life can become billionaires, why can’t a farmer who works day in and out to grow essential food grains become so? Now is the opportune time to raise this question. Why is it not a matter of pride for us when a farmer owns vehicles, speaks English, or wears suits? Contempt towards farming and farmers is deep rooted.

Such contemptuous attitude towards farmers and the farming community are responsible for children of farmers who are fairly rich to stay away from farming and choose careers in engineering and medicine or be enamoured with city life. Young men who rely on agriculture do not get suitable brides.

If a youth is asked about his profession and his answer is ‘agriculture’, there is a perceptible change in the attitude of the one who is asking the question who becomes pale on hearing the response.  If someone who has completed his higher education later chooses agriculture, he is labelled as ‘unemployed’ and repeatedly asked the following questions:

“Why are you doing this after studying so much” or “Did you have to study so much to do this”?  At the same time, we have amidst us many who have quit their engineering or medical jobs and surrendered themselves to agriculture and have become role models.

Newspapers publish stories of people who have grown different crops and have made crores of rupees owing to agriculture. Despite this, our prejudice against agriculture has not gone away. The contribution of Punjab towards the first Green Revolution is very significant.

Traditionally, they rely on agriculture and educated youth also do not hesitate to take up agriculture. Besides agriculture, they prioritise the army and have imbibed the motto of ‘Jai Jawan-Jai Kissan’ in their lives. As Punjab farmers are independent financially, educated, and are fluent in English, they are able to revolt against the government’s agriculture policy and question the government.

They are able to convey to the government that they are not slaves of rulers, by barging into the capital. They have started to change the attitude of the country towards farmers. It is the bounden duty of each person who consumes food to stand with farmers. Humiliating farmers would amount to humiliating the food we eat.