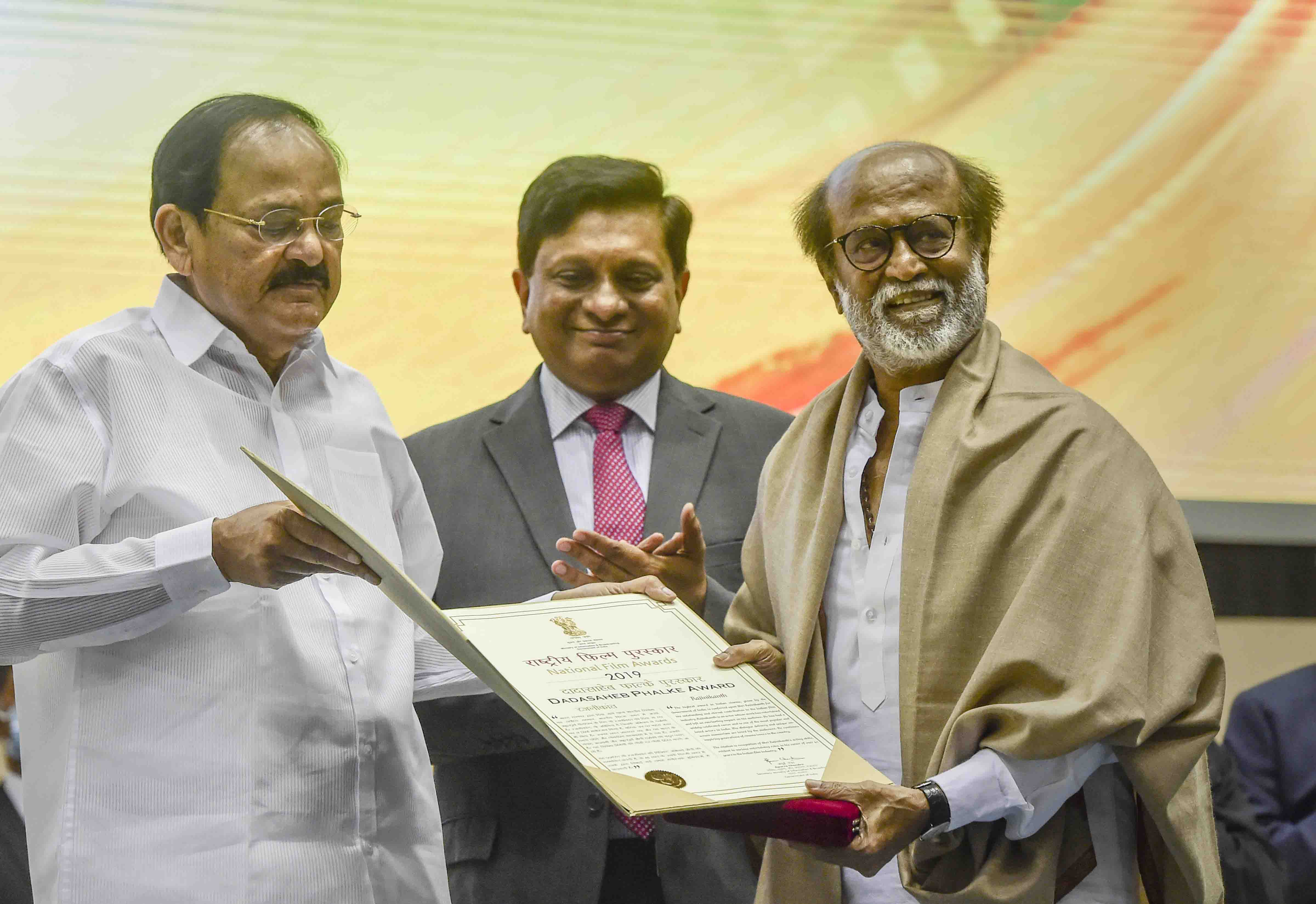 New Delhi, Oct 25: Superstar Rajinikanth on Monday received the Dadasaheb Phalke Award at the National Film Awards ceremony here and dedicated it to his mentor, the late K Balachander, his technicians, fans and also to friend, driver and transport colleague Raj Bahadur who encouraged him to join cinema.

Rajinikanth, whose glittering career from bus conductor to arguably the biggest star pan-India is the stuff of film fable, was presented the award by Vice President M Venkaiah Naidu at the Vigyan Bhavan here.

Receiving the award, the government's highest honour for Indian cinema, for the year 2019, Rajinikanth, popularly called Thalaivar' (leader in Tamil), thanked a host of people, including the Tamil people and the media.

"I'm extremely happy to receive this award and my thanks to the government for this most prestigious Dada Saheb Phalke Award. I dedicate this award to my guru, my mentor K Balachander sir, I thank my brother Sathyanarayana Rao, he is a father figure in my life, for giving me great values...

"My friend, driver and transport colleague Raj Bahadur. He spotted the acting talent in me and encouraged me to join cinema. All my producers and directors who have produced my films, technicians, artists, distributors, media, press and all my fans, and Tamil people..." the 70-year-old said in his acceptance speech.

Lauding Rajinikanth, a matinee idol for the ages, the vice president said Rajinikanth was "one of the great sons of this great country".

In his address, the vice president said the veteran actor has given memorable performances in films including "Bhairavi" and "Sivaji".

"The iconic thespian's unmatchable acting skills have given a new dimension to the Indian film industry... He has shown how to maintain a perfect balance between artistic expression and mass appeal," Naidu added.

From his 1975 debut with Balachander in "Apoorva Raagangal", "Moondru Mudichu", "Billa", Hindi titles "Hum , "ChaalBaaz", Bhagwaan Dada to "Enthiran", "Kaala" and now the upcoming "Annatthe", Rajinikanth continues to entertain the audience with his swag, style and inimitable on-screen presence.

Last December, Rajinikanth had shelved plans to make a foray into electoral politics. The superstar had announced he will not enter politics in view of his frail health.