Most Indians Non-Vegetarian; Men More Than Women, South And East Most

New Delhi, May 22: India’s Bharatiya Janata Party-led government has been advocating vegetarianism on grounds of religion and ideology, the latest being an effort by Indian Railways railways to enforce vegetarian menus on all trains on Mahatma Gandhi’s birthday, Oct. 2.

However, around 80 percent of Indian men and 70 percent of women consume eggs, fish, chicken or meat occasionally, if not weekly, according to an IndiaSpend analysis of national health data. But their daily diet tends to be vegetarian, consisting of milk or curd, pulses or beans and dark green and leafy vegetables.

The Ministry of Health and Family Welfare had recently courted controversy when it tweeted an image that grouped non-vegetarian foods such as eggs and meat with junk food, implying that both cause obesity. The image was subsequently deleted. 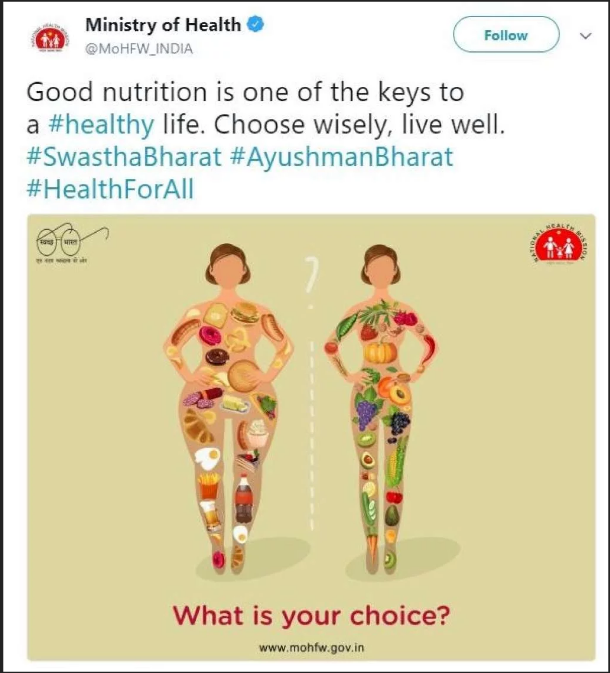 In 2015, Madhya Pradesh government had banned eggs from meals served in anganwadis or day-care centres allegedly due to pressure from Jain groups.

These moves come despite the recommendations of the National Institute of Nutrition, Hyderabad, which advocate the consumption of protein-rich animal foods such as milk, meat, fish and eggs–and plant foods such as pulses and legumes.

Also Read: Why India’s Packaged Food Market Will Jump To $200 Billion In A Decade

The Indian Railways are now planning to celebrate the birth anniversary of Mahatma Gandhi, a vegetarian, as ‘vegetarian day’. It plans to serve only vegetarian food on its premises and appeal to all its employees to abjure meat that day, reported Times of India on May 21, 2018.

Dietary risk, including poor diet–low in fruits, vegetables, whole grain but high in salt, fats–is the third biggest risk factor for death and disability in India after air pollution and malnutrition, IndiaSpendreported in November, 2017.

Among women between the age of 15-45 years, 45 percent have milk and curd, 44.8 percent have pulses or beans, and 47.2 percent have dark green, leafy vegetables daily, while 37.4 percent eat eggs and 36.6 percent eat fish, chicken or meat weekly. Almost half–51.8 percent–of them have fruits occasionally. 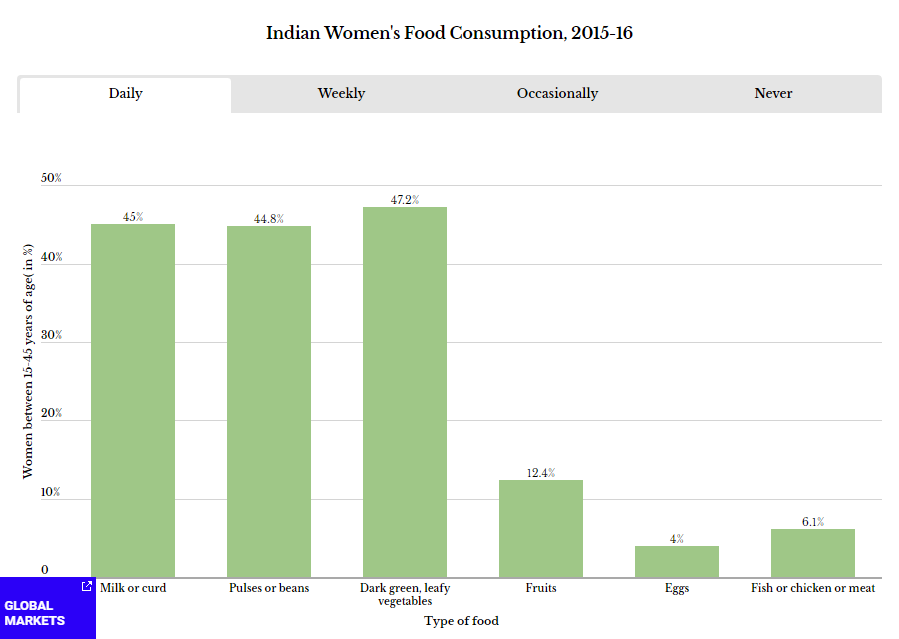 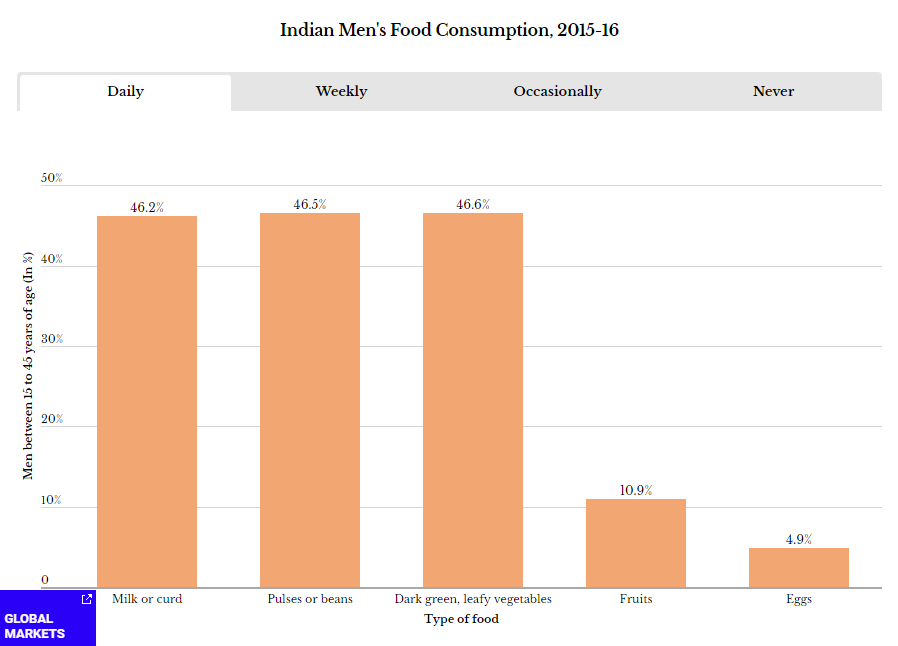 Weekly consumption of food items is not the same for all groups and follows different trends. But those over 19 years tend to eat more eggs and any kind of meat every week.

Among women, the highest consumption of eggs and meat was among those who were widowed or divorced or deserted (41.5 percent for eggs and 47.4 percent for fish, chicken or meat).

Education appears to decide the choice of vegetarian/non-vegetarian foods. Those who have studied up to five years eat the highest amount of eggs and meat–men (54.2 percent and 57.6 percent) and women (48.2 percent and 51.8 percent).

The highest consumption of eggs and fish, chicken or meat is among those who said they did not know their caste–men (49.2 percent and 51.6 percent). This holds true for women as well for eggs; for fish, chicken and meat it is highest in ‘other’ caste.

And while the consumption of eggs and meat increases with household wealth, a lower percentage of men and women among the richest 20 percent Indians consume eggs and meat. 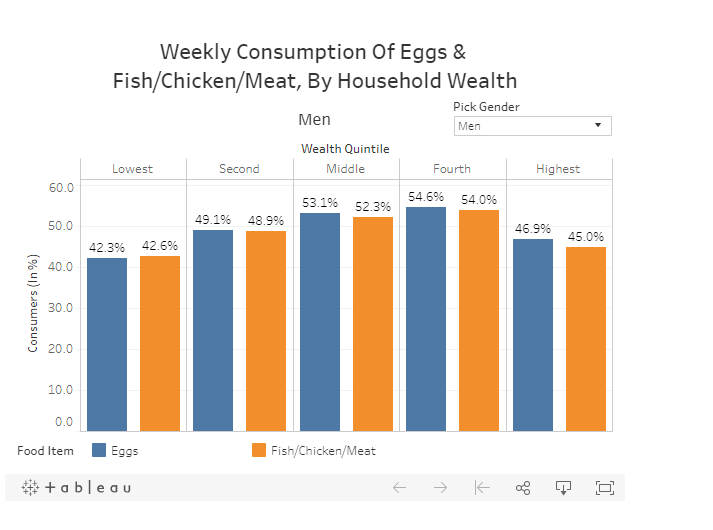 Most Meat Eaters In Kerala, Fewest In Punjab

Data on women show that Kerala (92.8 percent), Goa (85.7 percent) and Assam (80.4 percent) have the highest weekly consumers of fish, chicken or meat, while Punjab (4 percent), Rajasthan (6 percent) and Haryana (7.8 percent) rank the lowest.

The consumption of meat on a weekly basis is high in the northeast and south India. It is the lowest in the north for both the genders.

(Yadavar is a principal correspondent with IndiaSpend.)

This article has been published in arrangement with IndiaSpend.