Coronil has received Ayush Ministry certification as per WHO scheme: Patanjali 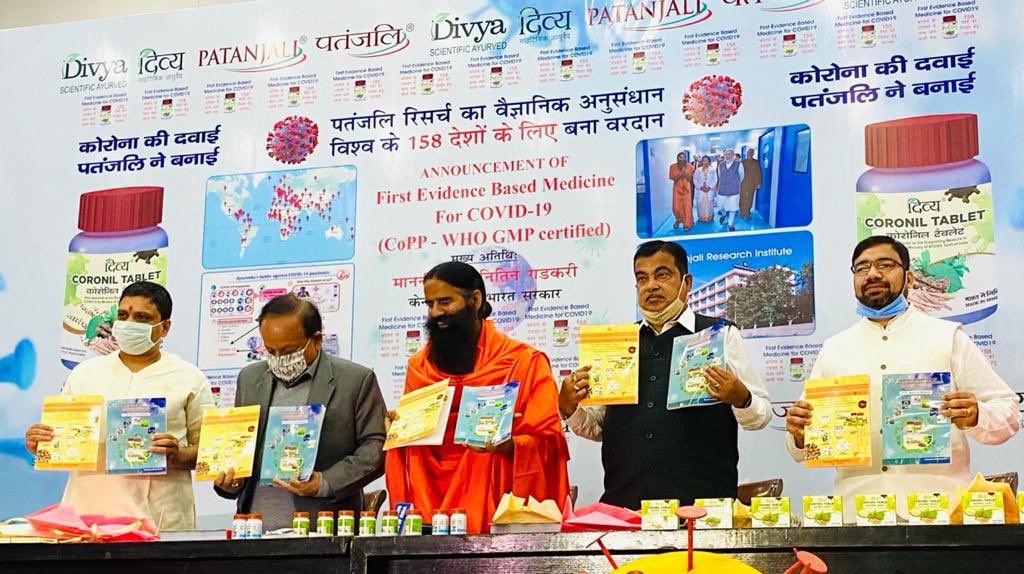 The Union Ayush Ministry had earlier categorised ayurvedic Coronil tablets as an ''Immuno-booster''.

Now, it has been recognised as a medicine for "supporting measure in COVID-19" treatment, Ramdev told reporters at a press conference here.

"Study on the impact of Coronil on COVID has already been published in leading journals," Ramdev said, adding "it would work not only for treatment, prevention and cure of COVID but also help in after-effects."

This is the first company in India which has received such a licence, he claimed.

The announcement regarding the Ayush certification for Coronil and release of a research paper calling it the "first evidence-based medicine for COVID-19 by Patanjali" was done at an event here attended by Union Health Minister Harsh Vardhan and Transport Minister Nitin Gadkari.

In a statement, Patanjali said: "Coronil has received the Certificate of Pharmaceutical Product (CoPP) from the Ayush section of Central Drugs Standard Control Organisation as per the WHO certification scheme."

Under CoPP, Coronil can now be exported to 158 countries, it claimed.

Patanjali had introduced ayurveda-based Coronil on June 23 last year, when the pandemic was at its peak. It had to face severe criticism as it lacked scientific evidence regarding its efficacy.

The Ayush Ministry had classified it as an "Immuno-booster" only.

The ministry earlier this month recognised Coronil as a medicine for "supporting measure in COVID-19" treatment, Ramdev said.

"This certification will remove the misconception about it in people''s mind as it cures COVID also," Ramdev said, adding "it will work against asymptomatic, symptomatic and severe (cases) also. We have data for that."

"It received a huge response despite all controversies. We have data which suggests that more than one crore people have consumed it," he added.

"Some people manufacture medicines for their business but we have done it for treatment and welfare of the public (upchar aur upkar ke bhavna se)," he said.

Coronil has been developed by Patanjali Research Institute. It had started work on an ayurvedic remedy for COVID-19 in January 2020.

We are delighted and proud to state that Coronil has been granted a CoPP license by DCGI, in accordance with the WHO GMP quality approvals. pic.twitter.com/4wT0TEbrV2

Mumbai: A Mumbai court on Monday issued a bailable warrant against actor Kangana Ranaut after she failed to appear before it in connection with a defamation complaint filed against her by lyricist Javed Akhtar.

The Andheri metropolitan magistrate's court issued a summons to Ranaut on February 1, directing her to appear before it on March 1.

However, Ranaut failed to appear on Monday following which Magistrate R R Khan issued a bailable warrant against her and posted the matter for further hearing on March 26.

A lawyer in the case had earlier informed March 22 as the next date of hearing.

Ranaut's advocate Rizwan Siddiquee argued in the court that the summons and process were issued against Ranaut without following the procedure laid down in law and hence, were "bad in law".

Siddiquee said a petition would be filed in the Bombay High Court challenging the process issued by the magistrate.

Akhtar's advocate Vrinda Grover, however, argued that even if the process is being challenged, Ranaut has to appear before the court as directed, in the absence of any stay on the summons by a higher court.

"It is the accused's right to appeal against the order, or even challenge the proceedings, that no one can deny and no one can stop, not even this court. However, she (Ranaut) has failed to comply with the order of this court and there is also no stay obtained from a higher court,"the lawyer argued.

Grover then filed an application seeking a non- bailable warrant to be issued against the actor. This was opposed by Siddiquee.

Magistrate Khan observed that Ranaut was at the liberty to approach a higher court to challenge the process issued against her, but that would not absolve her from appearing before this court.

The court issued a bailable warrant against Ranaut and posted the matter for hearing on March 26.

Last month, the Mumbai police submitted a report to the court, saying an offence of defamation was made out against the actor.

Akhtar filed the complaint against Ranaut in November last year for allegedly making baseless and false statements against him which, according to him, damaged his reputation.

In his complaint, the lyricist claimed Ranaut had made defamatory comments against him in an interview by dragging his name while referring to a "coterie" existing in Bollywood, following the death of actor Sushant Singh Rajput in June last year.

Akhtar in his plea claimed the baseless comments made by Ranaut had caused damage to his reputation.

Over 650 members of civil society have demanded a stop to the ‘vendetta politics’ against Harsh Mander and other activists, adding that the Centre has been “misusing” regulatory institutions and laws like the Foreign Contributions (Regulation) Act (FCRA) to harass civil society institutions.

The price of the Non-subsidised LPG gas cylinder was hiked by rupees 25 in New Delhi and the new rates will reportedly come into effect from March 1, 2021.

A plea challenging the Election Commission's decision to conduct assembly elections over eight phases in West Bengal was filed in the Supreme Court on Monday.