BJP trying to provoke Muslims to create opportunity for their 'genocide': Mehbooba Mufti 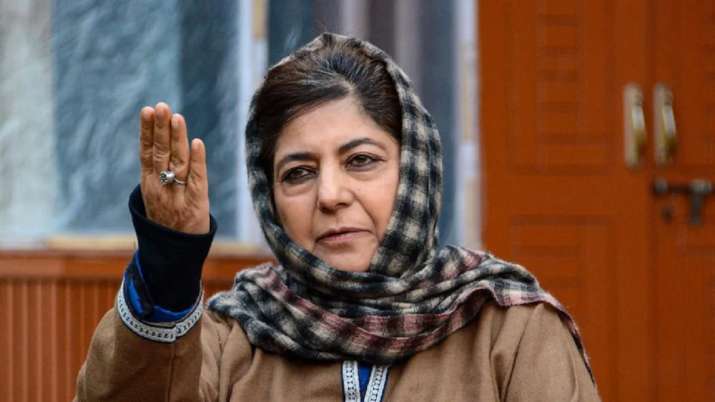 Srinagar, May 23: PDP chief Mehbooba Mufti on Monday alleged that the fundamentals of the country are being shaken, its Constitution shredded, and the BJP ministers are competing among themselves to harass Muslims.

The former chief minister of Jammu and Kashmir also accused the BJP of trying to provoke and instigate the Muslims to create an opportunity for their "genocide".

Mehbooba's remarks came in response to a question over Assam chief minister Himanta Biswa Sarma's statement that madrassas should cease to exist.

"This is not something new. Their shakhas are running where they provide training in sword and bow-arrow fighting. There is a competition going on whether to turn India into a Gujarat model or a UP model. The Assam chief minister wants to get a few steps ahead of them," she told reporters at the Peoples Democratic Party (PDP) head office here on the sidelines of a programme.

Mehbooba urged the people to recall the treatment meted out to Muslims in BJP-ruled states in the recent past.

"They are trying to turn the whole country into a Gujarat model, UP model, Assam model, MP model and the chief ministers of these are in competition on who will harass the Muslims more, who will, God forbid, initiate the wipe-out of Muslims," she said.

The PDP chief claimed that the BJP leaders and members were raking up sensitive issues such as that of 'Mandir-Masjid' so that "Muslims are provoked and instigated".

"This is being done so that they (Muslims) react and they (BJP leaders) get an opportunity to do another Gujarat carnage or what happened in UP or elsewhere, or a genocide (of Muslims)," she added.

Comparing the current situation in the country to that prior to 1947 when the British made the Hindus and Muslims fight each other, she said, "Today, the BJP people, their chief ministers, their ministers, are doing the work of the British.

Unfortunately, our prime minister, who is the prime minister of the whole country -- of Hindus, of Muslims, of Sikhs -- is watching it as a mute spectator. His silence is taken by his party as an acceptance of what they are doing."

On the Jammu and Kashmir government's decision to re-advertise posts under three schemes -- Rehbar-e-Janglat, Rehbar-e-Khel and Rehbar-e-Zirat the former chief minister said it was a sinister plan of the BJP to employ non-locals in the union territory.

"A sinister design of the BJP, the aim behind the abrogation of Article 370, is coming to the fore day by day. The people who were working for the last five years or more have been terminated and the posts referred to the SSRB (recruitment agency), it is an indication to what we have kept on saying that they want to give jobs to non-locals from across the country and keep our own youth away from employment," she said.

The youths of Jammu and Kashmir are being "disempowered economically", she alleged and said she would join the locals in their "peaceful protest" against the move.

"This is unfortunate. They are protesting. And there is no other option than to protest peacefully in a democratic setup," she said.

"We should take a lesson from the farmers (on their agitation in Delhi). But the problem here is that we are not allowed to come out of our houses. I have tried many times to go somewhere, but I am kept under house arrest within two minutes. You can see how much of security is deployed outside (PDP's office here). They fear I might go somewhere. I will still try to join their peaceful protest," she said.