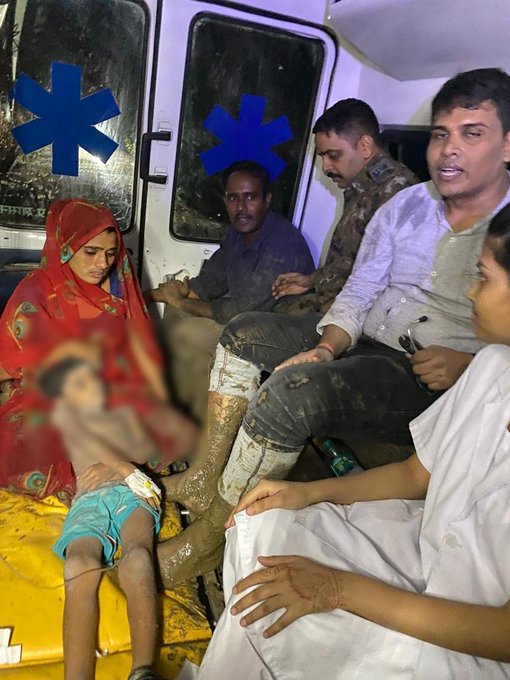 Bhopal/Chhatarpur, Jun 29: A five-year-old boy who had fallen into an open borewell was rescued safely after eight hours in Madhya Pradesh's Chhatarpur district on Wednesday, officials said.

Dipendra Yadav, son of Akhilesh Yadav, a farmer, was brought out of the borewell around 10 pm and rushed to a hospital for a medical check-up, the state's additional chief secretary (ACS) home Dr Rajesh Rajora told PTI.

The boy slipped and fell into an open borewell in his father's farm at Narayanpura Patharpur village, located near the district headquarters, around 2 pm.

After digging a parallel pit up to a depth of 28 feet, the rescuers got access to the borewell shaft through a tunnel, Rajora said.

The boy was stuck at a depth of 30 feet.

Heavy rains hampered the rescue operation but rescuers had covered the borewell's opening to prevent the entry of rainwater, an official said.

The district administration had also lowered a camera and oxygen pipe in the shaft and the child's movements were seen in the footage, Chattarpur collector Sandeep JR said.

Chief Minister Shivraj Singh Chouhan had directed the chief secretary, his principal secretary and the collector of Chhatarpur to make all necessary arrangements to rescue the child, an official said.

Madhya Pradesh | The 5-year-old boy who fell into the borewell in Chhattarpur, earlier today, was safely rescued and is alive. He is being taken to the hospital: CMO