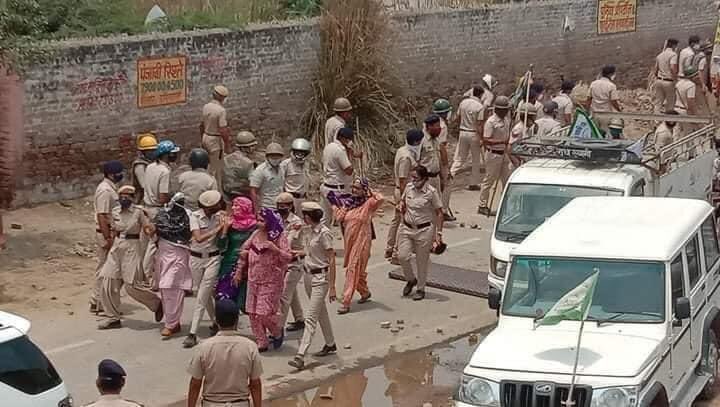 Hisar, May 16: Police here on Sunday lobbed tear gas shells and used force to disperse a group of farmers who tried march towards the venue where Haryana Chief Minister Manohar Lal Khattar had gone to inaugurate a COVID hospital.

Many people were injured in the incident.

Khattar inaugurated a 500-bed COVID Hospital on a school premises and had left the venue just before the protest took a violent turn.

The farmers were stopped before they could reach the venue, police said. They allegedly jumped police barricades after which police used force and lobbed tear gas shells.

While farmers claimed that over 50 of them sustained injuries in what they alleged was a police lathicharge, an official spokesperson said over 20 policemen, including a DSP and five policewomen, were also injured.

Police claimed some farmers pelted them with stones when they tried to stop them. Five police vehicles were also damaged by the protesters, they said.

The incident took place when the farmers, who have been protesting against the Centre's new farm laws, started proceeding towards Hisar from the Ramayan toll plaza to stage a protest against Khattar, who was to inaugurate a 500-bed COVID hospital there.

Police detained some agitators, including women. Police claimed they were marching towards the hospital to create obstructions in the chief minister's event.

Farmers are protesting against the Centre's new farm laws since late November and have been opposing public functions of BJP-JJP leaders in the state.

The Samyukta Kisan Morcha (SKM), an umbrella body of farmers' unions spearheading the stir against the farm laws, in a statement condemned the brutal assault on the protesters.

The SKM said farmers unions have announced tehsil and district-level protests on Monday in Haryana and UP against the alleged lathicharge.

Opposition Congress and Indian National Lok Dal hit out at the Khattar government for raining lathis on peaceful protesters.

A police spokesperson said the protesters broke metal barricade installed on a canal bridge and threw it into the canal.

After this, the protesters attacked DSP Abhimanyu Lohan, the spokesperson said.

At this place, the miscreants also tried to run a tractor over policemen, leaving some of them injured, the spokesperson said.

"The miscreants have also damaged five police vehicles," they said.

"Surprisingly, even after the conclusion of the hospital's inauguration programme, they tried to enter the premises where the treatment of coronavirus-infected has started today," he said, adding many of them had intention to commit violence on a large scale.

Haryana BKU chief Gurnam Singh Chaduni said over 150 farmers have been detained and they should be immediately released.

If not released, they will gherao all police stations in Haryana on Monday, Chaduni said.

The farmers later held a meeting in which Chaduni was also present.

To protest the police action, Chaduni said farmers blocked for two hours several highways, including the KMP expressway and the NH-44 at Pipli.

Haryana Congress president Kumari Selja condemned the use of force against farmers.

Rather than rolling back the farm laws, the BJP-JJP government is raining lathis on farmers, she said in a statement, adding that such a government has no right to stay in power and must step down.

She also alleged that the chief minister inaugurated the hospital in the presence of a large number of people, putting them at risk by not following the COVID protocols.

He said by unleashing such brutality on farmers, the General Dyer face of the Khattar government has been exposed .

Earlier this month, a group of farmers had staged a protest in Jind after they came to know that Chief Minister Manohar Khattar was there to take stock of arrangements in view of the prevailing COVID situation. However, the CM had left the town when farmers started their protest.