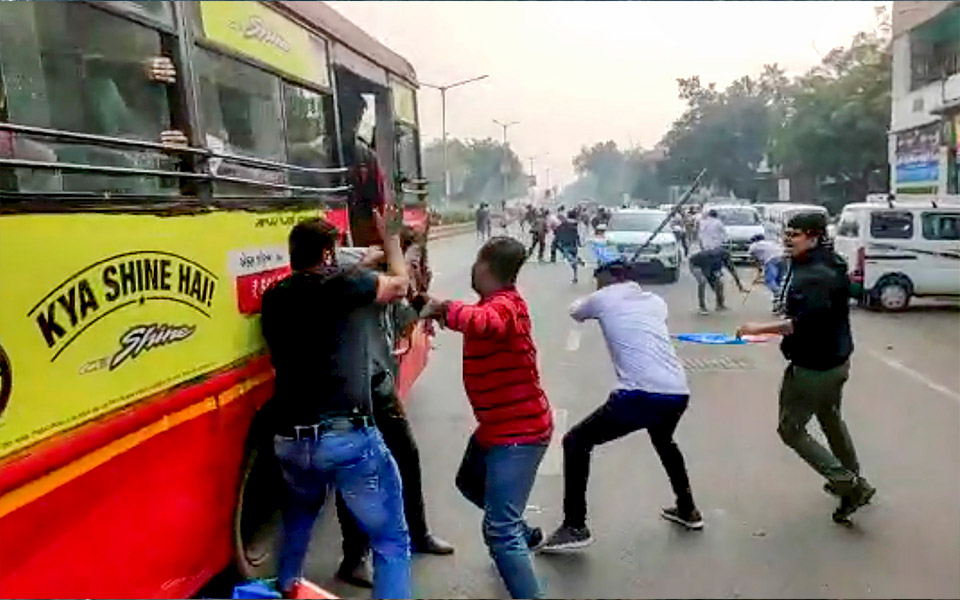 Ahmedabad: Members of the Akhil Bharatiya Vidyarthi Parishad and its rival National Students' Union of India clashed here on Tuesday during a protest against the JNU violence, leaving at least four persons from both the sides injured, police said.

The incident occurred during the demonstration organised by the NSUI, the students' wing of the Congress, outside the office of the RSS-affiliated ABVP in the city's Paldi area.

The police later rushed to the spot and brought the situation under control, an official said.

"Two members each from ABVP and NSUI were injured in the clashes. The situation was brought under control by the police. We have started the process to take complaints from both the sides," said Deputy Commissioner of Police, K N Damor.

Violence broke out here when members of the NSUI arrived outside the ABVP office to protest against the attack on students and teachers at the Jawaharlal Nehru University (JNU) in Delhi on Sunday.

The NSUI has been alleging that ABVP members were involved in the violence. Both the student bodies accused each other of using sticks and stones during the clash.

In a video clip telecast by some local news channels, Savani was seen being beaten by some people in the presence of police personnel.

Upon learning about the attack on Savani and others, local Congress leaders, including party spokesperson Manish Doshi, sat on a 'dharna' in the VS Hospital campus.

"ABVP attacked our members using sharp weapons. They wanted to kill Savani and three others, who were severely injured in the attack. It is equally shocking that the attack took place in the presence of police. This attack was executed under the supervision of BJP leaders under a well thought-out conspiracy," alleged Chavda.

Referring to the violence in the JNU, Chavda said the attack on NSUI activists here was executed as per BJP's "Delhi pattern", and at the behest of the "party high command".

The ABVP alleged that NSUI members came to its office with an intention to attack the activists, a claim backed by the BJP.

When asked about the violence captured on cameras, BJP leaders claimed that it was their right to respond if someone attacks them.

"I do not endorse violence, but I want to ask you.

What will you do if someone storms in your house with an intention to thrash you? Won't you defend yourself? The Congress started it all? What was the need to go to the office of the ABVP? The Congress was also behind the violence in JNU," said Gujarat BJP president Jitu Vaghani.

Similar views were expressed by local ABVP leaders when confronted by reporters over the attack on Savani and others.

"If someone attacks my house then I have every right to defend myself. Four of our members were injured in the attack by NSUI. What will you do if someone comes with an intention to hit you? They came prepared to attack us. NSUI even hurled stones on our office, but that incident was not captured on cameras," said ABVP media convener for Gujarat, Samarth Bhatt.

Bengaluru (PTI): Senior politician Basavaraj Horatti, who recently resigned as the Chairman of Karnataka Legislative Council and MLC, on Wednesday joined the BJP.

"Basavaraj Horatti has been a member of the Legislative Council for nearly 45 years and has served as its Chairman and Minister. He is a leader with lot of experience, commands a lot of respect and has been working for the cause of teachers. After deciding to join BJP he met Union Home Minister Amit Shah and resigned from his post and has officially joined the party today," Bommai said.

Speaking to reporters after welcoming the senior leader, he said, BJP is organising a huge programme in Hubballi shortly, to mark his induction into the party.

With this, Horatti, who has been elected as MLC seven successive times from 1980, has ended his long association with the JD(S).

He is likely to be fielded as the BJP's candidate for the upcoming MLC polls from West Teachers' constituency. Considered to be the senior-most MLC, the 76-year-old was seen as a prominent Lingayat face of the JD(S) from north Karnataka.

He had been education minister in the state, and was elected as the Chairman of the Legislative Council in February 2021.