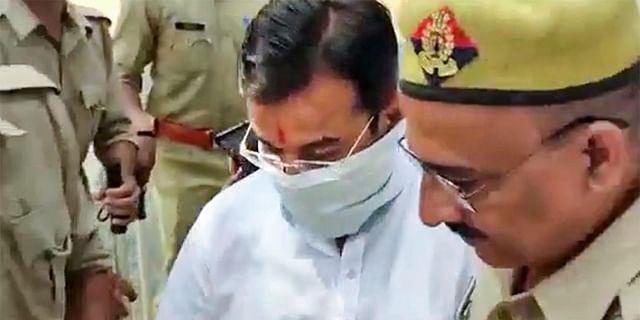 Lakhimpur Kheri (UP), Oct 13: Two more persons were on Wednesday arrested in connection with the Lakhimpur violence, while a court here denied bail to the main accused, Ashish Mishra, son of Union minister Ajay Mishra.

Ankit Das and Latif alias Kale, who appeared before the Special Investigation Team (SIT), were taken in custody after questioning and produced in court which sent them in judicial remand for 14 days, official sources said.

With this, the total number of people arrested in connection with the mowing down of four farmers here on October 3 has gone to six.

While the police sought their custody for interrogation, their lawyer opposed it saying no recovery is to be done from them.

The court reserved its order on the application for police remand of the two, they said.

Ashish Mishra, who was arrested on October 9 by the special investigation team after 12 hours of questioning, had been sent to three days in police custody from Tuesday.

Ankit Das and Kale, who is said to be a close friend of Ashish Mishra, appeared before the SIT at the crime branch office in Lakhimpur earlier in the day.

The investigators had summoned Das and Kale for questioning in connection with the October 3 violence that had left eight people, including four farmers, dead.

Das is the nephew of former minister Akhilesh Das.

On Tuesday, Das and Kale had moved an application for surrender before the chief judicial magistrate.

Two BJP workers, a driver of the minister and a journalist were among those killed in the violence.