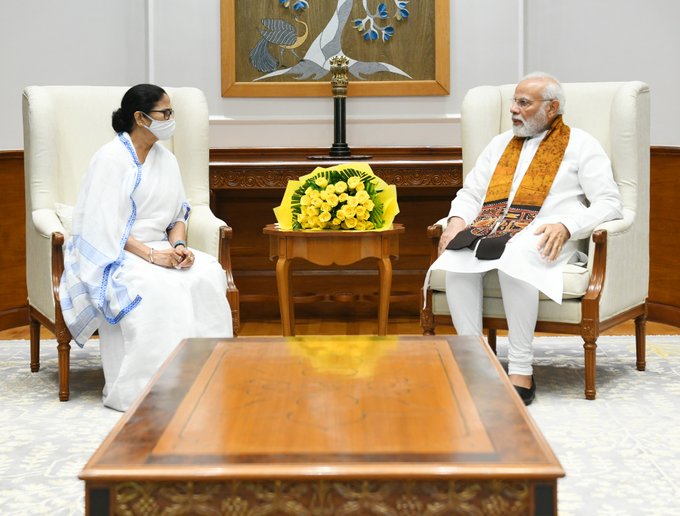 Kolkata, Aug 5: The CPI(M) on Friday alleged that Chief Minister Mamata Banerjee's meeting with Prime Minister Narendra Modi was an attempt to enter into an "understanding" in the backdrop of central agencies' investigations in various cases, including the school jobs scam in West Bengal.

CPI(M) central committee member Sujan Chakraborty alleged that had it been a meeting for getting the dues of state, officers of various departments of the state government would also have been present with relevant documents.

"There is no reason to think that the meeting was in the interest of the state," Chakraborty claimed.

Maintaining that Banerjee or other ministers of West Bengal do not attend official meetings called by the central government, Chakraborty alleged that they go for unofficial meetings for interests other than that of the state and its people.

Even senior BJP leader Tathagata Roy, the former governor of Tripura and Meghalaya, tagged Prime Minister Narendra Modi and tweeted, "Kolkata is agog with apprehension of a setting'. Which means a secret understanding between Modiji and Mamata, whereby the thieves of Trinamool and/or the murderers of BJP workers would go scot-free. Please convince us that there wud be no such 'setting'. (sic)"

Banerjee met the prime minister and raised a host of issues concerning the state, including GST dues and timely release of funds by the Centre under various schemes.

The Prime Minister's Office shared a picture of the meeting, which lasted about an hour.

In a memorandum to the prime minister, Banerjee said she had repeatedly sought his intervention for urgent release of funds due to the state on account of the implementation of the rural job scheme MGNREGA, PM Awas Yojana and the PM Gramin Sadak Yojana.

Central agencies such as CBI and ED are investigating a slew of cases in West Bengal, in which top TMC leaders have been named as accused.

Kolkata is agog with apprehension of a ‘setting’. Which means a secret understanding between Modiji and Mamata, whereby the thieves of Trinamool and/or the murderers of BJP workers would go scot-free. Please convince us that there wud be no such ‘setting’ @narendramodi @PMOIndia