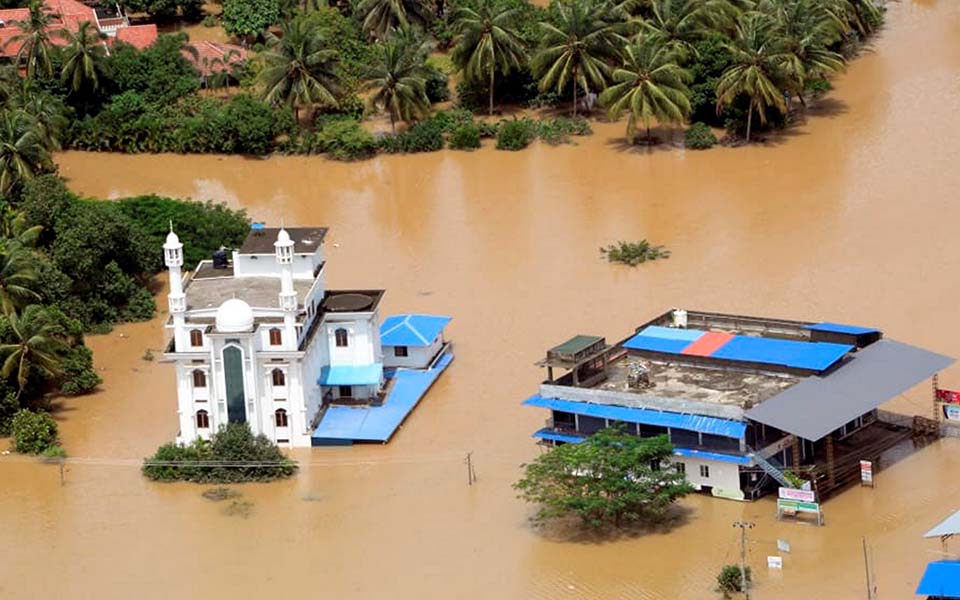 Malappuram: A view of a flood-affected region in Malappuram district of Kerala

Thiruvananthapuram, Aug 14: After a brief respite, rains lashed several parts of Kerala on Wednesday under the influence of the 'vigorous' South West Monsoon as the death toll in its second spell rose to 102 with 37 people missing.

Rains, which abated on Monday, battered various parts since Tuesday night with the Met office in its latest update forecasting more showers, including heavy rains in isolated places, in the next few days and warning fishermen not to venture into sea.

Chalakudy in Thrissur received 17 cm rains on Wednesday, followed by Peermade in Idukki (15), Cherthala in Alappuzha (13), Agathi (Lakshadweep) and Enamackel, Thrissur (12 each), the Met department said.

A government update at 5 PM said a total of102 people lost their lives across the state in floods and landslides, triggered by the second spell of monsoon, since August 8.

Though people have started shifting to their homes in many places, there are still 1,89,649 sheltered in 1,119 relief camps.

The Met department in its update for the next 24 hours from 6 pm on Wednesday said the monsoon has been vigorous in most places in the state.

Warning fishermen not to venture into sea, it said strong wind from southwesterly direction with speed reaching 45-55 kmph was likely along and off Kerala coast.

A red alert (extremely heavy rains) had been issued for three northern districts of Malappuram, Kannur and Kozhikode, which bore the brunt of the flood fury and landslides last week, and central district Pathanamthitta was put on high vigil due to torrential rains since last night.

A holiday was declared for educational institutions in 11 of the 14 districts in the state on Wednesday.

The state government announced a package of flood compensation with an immediate financial aid of up to Rs 10,000 each to all calamity-hit families, who had suffered loss in the flash floods and unprecedented landslides triggered in the second spell of monsoon.

After chairing a cabinet meeting, Chief Minister Pinarayi Vijayan said a total of Rs 4 lakh compensation would be given to those whose houses had been fully damaged or had become inhabitable and Rs 10 lakh to those who had lost their house as well as land.

Compensation would also be given for the crop loss, repair and rebuild of damaged roads and buildings and for the maintenance of drinking water and irrigation projects, he said adding that flood-hit families and fishermen would be given 35 kg free rice.

On Wednesday, a fisherman drowned and three others were rescued when their fishing craft capsized in nearby Vizhinjam.

Despite inclement weather, search operations continued at Kavalappara in Malappuram and Puthumala in Wayanad, where a series of landslides had wiped out two villages last week, to trace those who were suspected to have gone missing.

Malappuram district accounted for most deaths with toll there rising to 42 on Wednesday and 29 people still missing, followed by Kozhikode (17), Wayanad (12 deaths, 7 missing), Kannur 9 and Thrissur 8. One person was missing in Kottayam district.

As per the government update, a total of 11,286 houses have been partially damaged and 1,060 fully damaged.

Chief Minister Vijayan and Congress leader and MP Rahul Gandhi had toured the worst affected districts of Malappuram and Wayanad.