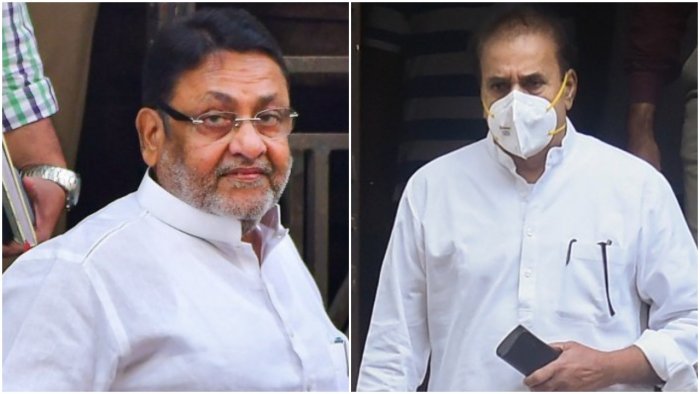 New Delhi, Jun 29: The Supreme Court on Wednesday allowed jailed Nationalist Congress Party (NCP) MLAs Nawab Malik and Anil Deshmukh to participate in the Maharashtra Assembly floor test scheduled to be held on Thursday at 11 am.

A vacation bench of Justices Surya Kant and JB Pardiwala said that investigating agencies CBI and Enforcement Directorate will bring the jailed MLAs to the Maharashtra Vidhan Sabha' for the floor test and will take them back into judicial custody after the process is over.

It said, We allow the petitioners to participate in the special session of the Maharashtra Vidhan Sabha scheduled to be held tomorrow, that is June 30, 2022, at 11 am. Since the applicant petitioners are presently in judicial custody pursuant to the cases registered against them by the Enforcement Directorate and CBI and both the agencies are directed to produce the petitioners to Vidhan Sabha Hall and after the proceedings are over, the applicants be brought back in judicial custody .

The bench directed the Maharashtra government counsel to convey the order of the court to all the concerned authorities.

At the outset, Solicitor General Tushar Mehta tried to oppose the application of Malik and Deshmukh and said that they had not put on record the earlier order of the top court.

Senior advocate Meenakshi Arora, appearing for the MLAs, said that it is on record and was passed in the context of MLC elections.

The bench then told Mehta, There is no election, it is a floor test. Let them participate, they are the elected MLAs. Otherwise, this will have dangerous precedent as the government of the day may try to misuse the position and put the opposition leaders in jail .

Mehta then said that it is leaving up to the court and did not oppose the plea saying that they should be brought in custody and taken back in custody.

The bench which sat beyond the court hours to hear the petitions on the Maharashtra political crisis thereafter disposed of the applications of Malik and Deshmukh after passing the order at 9.15 pm.

Earlier in the day, advocate Sudhanshu S Choudhuri said that the two MLAs have been booked for offences under the Prevention of Money Laundering Act (PMLA) and are in jail.

He said the two leaders want to participate in the Maharashtra legislative assembly floor test scheduled to be held on Thursday at 11 am.

Choudhuri said they are moving an intervention application which may be heard in the evening after the plea of Shiv Sena leader Sunil Prabhu challenging the decision taken by Governor Bhagat Singh Koshyari asking the Maha Vikas Aghadi (MVA) government to prove majority on Thursday.

The bench then said it would take up their application at 5.30 pm.

On June 20, the top court declined the plea of Malik and Deshmukh seeking temporary release from prison to cast their votes in the Maharashtra Legislative Council election.

A vacation bench had, however, issued notice to the Maharashtra government and others in the case and agreed to examine the issue relating to the interpretation of Section 62(5) of the Representation of the People Act 1951, which bars jailed persons from voting.

"In view of the larger question with respect to interpretation of Section 62(5) of Representation of the People Act 1951, we are of the view that matter has to be heard in detail. It's open for the parties to complete the pleadings within four weeks.

The Bombay High Court had on June 17 rejected the NCP leaders' plea seeking temporary release from prison for casting their ballots saying the constitutional right to vote is not absolute.

Malik, who is still a cabinet minister in the state, and former Maharashtra home minister Anil Deshmukh, both of whom are in prison after being arrested in separate money laundering and corruption cases, had then sought the court's permission to be let out of custody "for a few hours," and "under escort protection" to vote.

The high court had rejected the pleas of the leaders, saying that while their lawyers argued that their clients must be permitted to vote to uphold democratic principles, the concept of democracy "transcended electoral democracy."

The embargo in law, imposed via section 62 (5) of the Representation of the People Act, was based on reason, the high court had said, adding that it has been imposed to ensure "purity of electoral process and probity of the participants therein."

The two leaders had moved the court earlier contending that as they are members of the Legislative Assembly and representatives of their respective constituencies, they ought to be given the opportunity to vote in the Council election.

"The claim to the exercise of this constitutional right can, by no stretch of the imagination, be said to be absolute," the high court had said in the judgement.

Earlier, Malik and Deshmukh had moved the courts for temporary bail for voting in the June 10 Rajya Sabha election from Maharashtra but were denied relief.