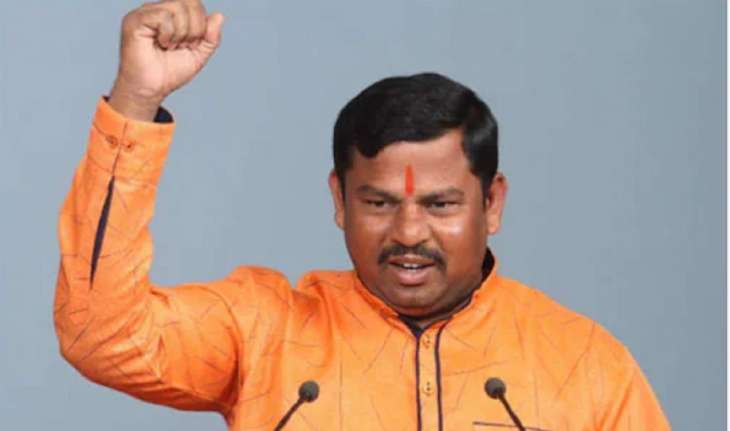 Murudeshwar (Karnataka): Former BJP MLA Raja Singh who was suspended from the party for insulting Prophet Mohammed, has once again courted controversy after one of his videos from Murudeshwara is being widely shared on local social media platforms.

In the video, the former MLA from Telangana is seen standing at the Murudeshwara beach, calling on Karnataka CM and right-wing fringe groups to vacate Muslim vendors and traders near the beach as their presence near the Murudeshwar Temple impures the historic temple.

“During my two-day stay here, where followers of Lord Shiv come from various parts of the country, near the beachside, non-Hindus have encroached the area and have set up sheds for their businesses. These are encroached sheds.

“Totally around 3-4 thousand families have come and encroached here who oppose Lord Shiv, who don’t believe in Hindu religion and eat beef. You know which religion I am talking about. This is not the case only in Murdeshwar, these people are encroaching on all the areas where our historic temples are located and they are impuring our temples.” He said in the video.

He further lauded Karnataka CM for "raising the Hijab row" and called on him to pay attention to issues like this and vacate Muslim traders near temples.

“I request the Chief Minister of Karnataka and other Hindutva organizations to take note of this and throw these people away from these sites.” He added.

Contrary to the claims by the former MLA that the traders had encroached on the beachside, one of the traders who has a stall near Murudeshwar Beach and the temple, confirmed to Vartha Bharati that the shops and stalls set up at the beach are not illegal and are set up with the permission of district administration.

“We have not set anything up illegally. We have had our businesses here for several years, we pay rent, and we have valid permission from the district administration for setting up these stalls.” The trader who did not wish to be named said.

Raja Singh was a member of the Telangana Legislative Assembly representing the Goshamahal assembly constituency in Hyderabad. He is a former member of Telugu Desam Partyuntil he joined the Bharatiya Janata Party. He was part of the BJP until 23 August 2022 when he was suspended over allegations of insulting Prophet Mohammed. Raja served as the party whip for Telangana when he was in Bharatiya Janata Party.

New Delhi, Feb 6: Train passengers would soon be able to order food through a WhatsApp number, with an interactive Artificial Intelligence-enabled chatbot handling their queries on e-catering and booking meals.

"WhatsApp communication for e-catering services implemented on selected trains and passengers. Based on customer feedback and suggestions, the company will enable the same on other trains," the Railways said in a statement on Monday.

The IRCTC has started e-catering services through a specially developed website www.catering.irctc.co.in as well its e-catering app 'Food on Track', it said.

The implementation of e-catering services through WhatsApp was envisaged in two phases.

The first phase has already been implemented, Under this, a business WhatsApp number sends a message to the customers booking e-ticket for opting in e-catering services by clicking on www.ecatering.irctc.co.in.

They are then enables to book meals of their choice from the restaurants of their choice available at stations enroute directly through the e-catering website of IRCTC without even requiring to download the App.

The next phase is when the interactive WhatsApp meal booking and delivery are planed.

Under this, the WhatsApp number will be enabled to become an interactive two way communication platform for the customer wherein an AI-powered chatbot will handle all queries of e-catering services for the passengers and book meals for them.

Currently, approximately 50,000 meals are being served in a day to the customers through IRCTC's e-catering services enabled through its website as well as app.