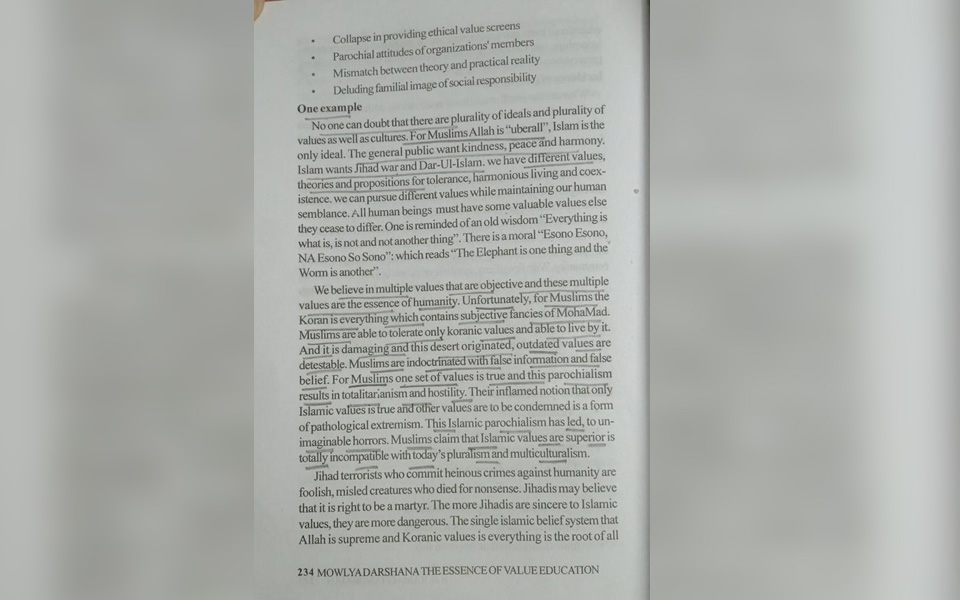 The book authored by BR Ramachandraiah is reportedly taught in B.Ed. courses across various universities including Mangalore University. The content of the book, pictures of which are going viral, depicts descriptions of Islam in an objectionable way saying Islam wants Jihad and War while the general public wants peace, harmony, and kindness.

Several Educationists and activists expressed their anguish over the content that is being taught to the budding teachers who will go on to teach students at various levels.

“No one can doubt that there are plurality of ideals and plurality of values as well as cultures. For Muslims Allah is “uberall”, Islam is the only ideal. The general public want kindness, peace and harmony. Islam wants Jihad war and Dar-Ul-Islam,” one of the article about plurality in the book read.

“We believe in multiple values that are objective and these multiple values are essence of humanity. Unfortunately, for Muslims the Koran in everything which contains subjective fancies of MohaMad. Muslims are able to tolerate only koranic values and able to live by it. And it is damaging and this desert originated, outdated values are detestable. Muslims are indoctrinated with false information and false belief. For Muslims one set of values is true and this parochialism results in totalitarianism and hostility. Their inflamed notion that only Islamic values is true and other values are to be condemned in a form of pathological extremism. This Islamic parochialism has led, to unimaginable horrors. Muslims claim that Islamic values are superior is totally incompatible with today’s pluralism and multiculturalism,”(sic) some of the contents in the book further read.

Among those who reacted to the development was Educationist Niranjanaradhya VP and said the content was highly objectionable. He added that the author was targeting a particular section of the society with an ulterior motive.

“This is highly objectionable. The irony is that the author himself is parochial in his understanding and approach while talking about parochialism. He is clearly targeting a particular section of the Indian society with an ulterior motive of targeting and branding them as fundamentalists. Parochialism is in all sections and religions and that need to be addressed as a whole but not with the intention of only pointing a particular section with a hidden agenda of partisan,” Niranjanaradhya told Vartha Bharati.

Popular Front of India (PFI) also condemned the addition of objectionable contents in the book that is taught to B.Ed. course and blamed the BJP government for manipulating the education system by including Islamophobic content in the syllabus. The organization also called for criminal cases against the author and publishers of the books.

Speaking to Vartha Bharati over a phone call, the author BR Ramachandraiah, went on record to admit to the “mistake” on his part for authoring the content and apologized for the same. He added that the content has been withdrawn from the further publications of the book.

Ramachandraiah who initially denied having any such content in his book against any particular community, later said “It was our mistake and we are sorry for the content, this should not have published in the first place,” the author told Vartha Bharati after the pictures of the content that are going viral were shared with him.