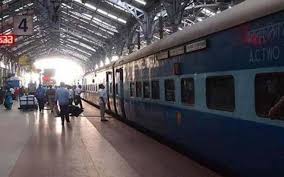 Chennai: The Southern Railway on Thursday announced operating two daily specials to Thiruvananthapuram and Mangaluru from here, days after the resumption of intra-state trains in Tamil Nadu.

Following the Railway Board's approval, it announced running one superfast special each to the two cities from September 27.

As approved by Railway Board, the fully reserved special trains will be introduced daily, from Chennai from Sunday, a Southern Railway release here said.

The return services from Thiruvananthapuram and Mangaluru from will start from September 28.

In the return direction, Train No 02624 will leave Thiruvananthapuram Central at 15.00 hrs and reach Dr MGR Chennai Central at 07.40 hrs the next day, it said.

Similarly, Mangalore-bound Train No 02601 will leave Dr MGR Chennai Central at 20.10 hrs and reach Mangalore Central at 12.10 hrs the next day.

In the return direction, Train No 02602 will leave Mangalore Central at 13.30 hrs to reach Dr MGR Chennai Central at 05.35 hrs the next day, the release added.

Earlier, Southern Railway had introduced special trains in Tamil Nadu connecting Chennai to various cities including Coimbatore, Tiruchirappalli and Madurai after the state government gave the green signal for resumption of inter-district train services from September 7.