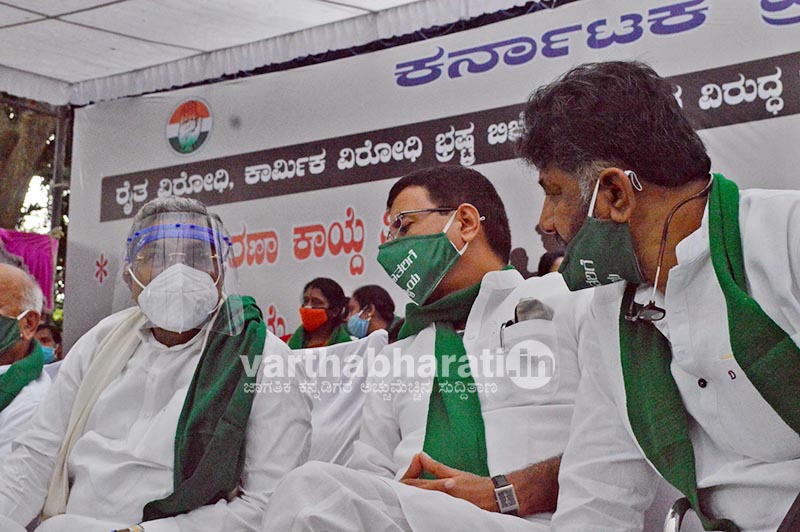 Bengaluru: Protests and rallies by farmers' bodies and opposition parties marked the Karnataka bandh on Monday against amendments to two state legislation related to the farm sector, while Chief Minister B S Yediyurappa said he was ready to talk to the royts and allay their fears.

The shutdown call evoked a mixed response and though markets were open, buses and metro trains were operated, the turnout was relatively low.

The dawn-to-dusk bandh called by the Karnataka Raitha Sangha (farmers' association) and other farmer organizations was supported by the Congress, JD(S), Karnataka Rakshana Vedike (KRV), and the Left parties.

Amid heavy police deployment, the protesters, waving party flags and raising slogans against the amendments to the APMC and land reforms acts courted arrest.

Parts of the state, including the capital city, saw massive protests with public squares teeming with protesters.

Tyres were set ablaze at some places to mark their opposition.

Ignoring social distancing norms to contain the spread of coronavirus, farmers hit the streets in groups at many locations, raised slogans, took out bike rallies, and staged demonstrations.

In Bengaluru, farmers and Karnataka Rakshana Vedike members, including its chief T A Narayana Gowda, took out a rally and tried to stop buses when they were arrested.

The amendment to the land reforms act lifts restrictions on purchasing agricultural land and enables any individual to buy them. Earlier, the law permitted only farmers to purchase agricultural land in the state.

Seeking to allay fears of farmers, the Chief Minister said: "sit with us and have a discussion. I am always ready to make changes for the benefit of farmers."

He said the amendments to the two acts were aimed at benefiting the farmers and not the way projected by certain people.

Leader of the Opposition in the state Assembly Siddaramaiah claimed the amendments were unnecessary.

"Both the amendments will have a deadly effect on the farmers," he alleged during the agitation staged by his party in the city.

AICC general secretary in-charge of Karnataka, Randeep Singh Surjewala, asked the Chief Minister to repeal the 'draconian amendments' instead of banning the bandh.

"Dear BS Yediyurappa Ji, Instead of banning the Farmers #Karnataka Bandh, 'ban' & 'banish' the anti-farmer- laborer mindset. Withdraw the law & apologize for the blatant sell out by BJP on Land Reforms Bill. Repeal the draconian amendments to APMC Act. This is your litmus test!" he tweeted.

The protesters alleged that the amendments would ruin agriculture as people with "moneybags" would purchase farmlands to convert their "black money into white."

The agitations coincided with the nationwide protests against the three farm bills.