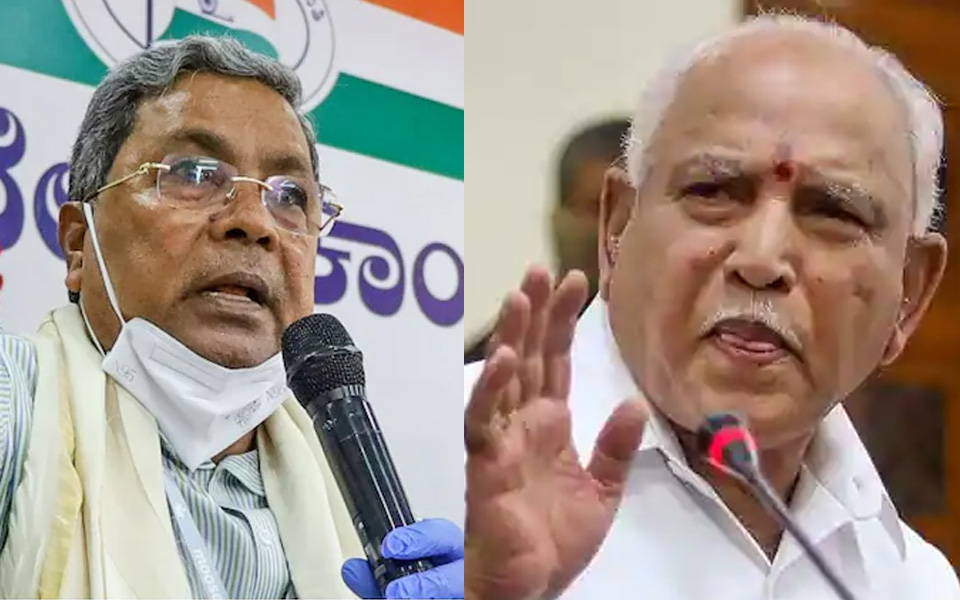 Kumaraswamy had yesterday claimed that the recent Income Tax raids on a person, who is said to be close aide of Yediyurappa, was an attempt by the BJP leadership to "control" him, following his alleged meeting with Siddaramaiah.

Congress stalwart Siddaramaiah challenged Kumaraswamy and said he will retire from politics, if it was proved that such a meeting took place. On the other hand, BJP veteran Yediyurappa termed it as "far from truth and meaningless".

"I had gone to meet Yediyurappa on his birthday. I had not met him personally as Chief Minister or as the Leader of Opposition. I have not met him (personally) till today. We both were in the same hospital when we were infected by Corona, even then we had not met," Siddaramaiah said.

Speaking to reporters in Kalaburgi, he claimed it is Kumaraswamy who repeatedly met Yediyurappa, when he was the CM.

"Let him (Kumaraswamy) prove that Yediyurappa and I have met, I will retire from politics.... While in opposition I will never meet those in the ruling party, nor go to their office or house, it is the principle I follow.....it (Kumaraswamy's claims) is blatant lies," he added.

On the other hand, Yediyurappa, who took to social media to reject claims about his meeting with Siddaramaiah, without naming Kumaraswamy, said he has never compromised on the ideology he believes in and his only aim was to bring BJP back to power in Karnataka.

"Other than my birthday on February 27, 2020, I have not personally met Leader of Opposition Siddaramaiah..I have no need to have such a meeting. We in the party are working to bring BJP back to power in the state," Yediyurappa tweeted.

Further stating that he will not rest until achieving the goal of bringing BJP back to power, he said, "I have never compromised on the ideology that I have believed in, and will never compromise in the future. As Siddaramaiah has clarified that no such meeting has taken place, I'm too clarifying that the reports in the media in this regard are far from truth and meaningless."

Speaking to reporters in Mysuru, Kumaraswamy on Tuesday had claimed that the recent Income Tax raids specifically on a person who is said to be Yediyurappa's Personal Assistant and Water Resources department related contractors, was an attempt by the BJP to "control" Yediyurappa, following his alleged late night meeting with Siddaramaiah.

"Anyone with the slightest understanding of politics can understand that the recent IT raids were for what reasons....IT raids were with a political motive...it is to control or checkmate Yediyurappa...as both (Siddaramaiah and Yediyurappa) had a late night meeting about political developments, and the BJP that has government both at the Centre and state got to know about it from their sources, and probably have tightened things," he said.