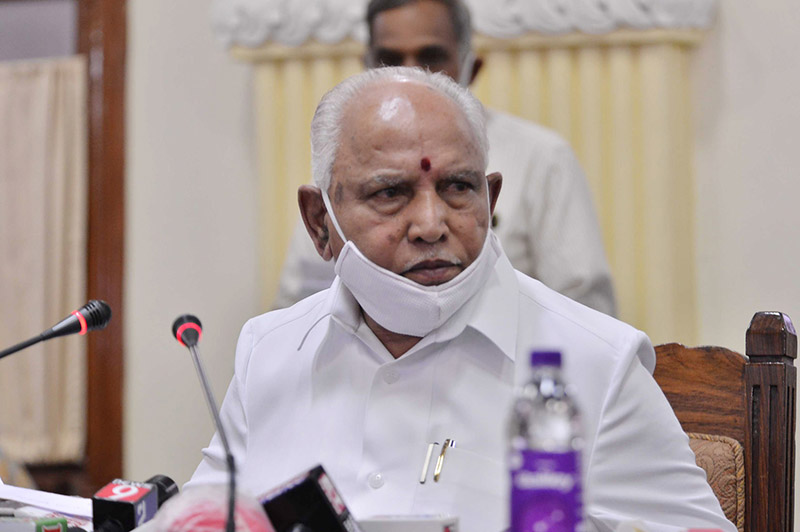 Bengaluru: Karnataka Chief Minister B S Yediyurappa has convened a meeting of his cabinet and party MPs on Friday as he awaits approval from the BJP central leadership to carry out the much-awaited expansion or reshuffle of his Ministry.

The cabinet meeting is slated for 10.30 am at the 'Vidhana Soudha', the seat of power in the state, and that of party MPs at his home office 'Krishna' at 4 pm, official sources said on Thursday.

There have been rumors in some quarters in recent times that the BJP is weighing the option of leadership change in Karnataka considering the age of Yediyurappa, who is 77.

The state BJP has repeatedly rejected such speculations, but some within the party like senior MLA Basanagouda Patil Yatnal have openly talked about his replacement.

"...we are saying repeatedly that there is no leadership change in Karnataka, Yediyurappa will continue as Chief Minister. There will be no change, he (Yediyurappa) is our leader and he will continue," Narayan told reporters.

The Chief Minister's political secretary M P Renukacharya too said, "our national leaders and state president have said that Yediyurappa will continue as CM".

He hit out at the Leader of the Opposition in the state assembly Siddaramaiah, who had claimed the BJP will change the Chief Minister citing "information from sources in Delhi".

The meeting with MPs has come in the backdrop of, Chamarajanagar Lok Sabha member V Srinivas Prasad on Wednesday making no secret of his "disenchantment" with the Chief Minister, by stating that Yediyurappa "doesn't need us anymore".

"Subject has not been specified; it may be about development and issues pertaining to the state that are pending before the Centre," he said.

The Chief Minister making a flurry of political appointments to various statutory bodies in the state in the last two days has also fuelled speculation.

Jarkiholi has made it clear he was batting for MLC C P Yogeshwar to be inducted into the Ministry along with a couple of Congress-JD(S) rebels who joined the BJP with him and are now party legislators.

Savadi and Ashoka have said that they are going to Delhi to attend BJP national General Secretary C T Ravi's office inauguration.

According to sources, senior national BJP leaders are likely to attend Ravi's office event and the Ministers are expected to meet them regarding developments in the state.

Yediyurappa on Wednesday said that he was expecting communication from the BJP high command in 2-3 days regarding the expansion or reshuffle of his cabinet.

He had met Nadda in this regard in Delhi last week but was reportedly asked to wait for clearance from the central leadership to go ahead with the process.

BJP National General Secretary (Organisation) B L Santosh on Monday met the Chief Minister and both leaders reportedly held discussions in this regard.

Political activities have intensified within the ruling BJP camp in the state after Yediyurappa on November 10, soon after the party's victory in bypolls to two assembly constituencies, had indicated that cabinet reshuffle is on cards.

The exercise is expected to be a tightrope walk for Yediyurappa, considering that there are too many aspirants.

While several of the old guards like Umesh Katti are waiting for a chance to be inducted into the Ministry, Congress-JD(S) rebels like AH Vishwanath, R Shankar, and M T B Nagaraj, who helped the BJP to come to power last year and are now party MLCs, are also aspiring for slots.

The cabinet currently has 27 members and seven berths are vacant.

Mangaluru: The National Accreditation Board for Hospitals and Healthcare Providers (NABH) has granted NABH accreditation to Unity Hospital, with effect from December 2, 2020, which is valid up to December 1, 2023.

NABH is a constituent board of Quality Council of India, set up to establish and operate accreditation programme for healthcare organizations. NABH is an institutional member as well as a board member of the International Society for Quality in Health Care (ISQua) and the hospitals accredited by NABH will have international recognition.

Accreditation in healthcare goes beyond just infrastructure for a hospital. It is about process and outcome.

NABH standards for hospitals provides a framework for quality assurance and quality improvement at all levels and across all the functions. It calls for compliance with the laws of the land, seeks to question how the objectives of patient safety & infection control are achieved.

The accreditation process started a few years back and with the continuous dedication and hard work of every staff of the Unity Hospital.

So far, NABH has accredited only 725 hospitals in the country and Unity Hospital is the 723rd in the list. This makes Unity Hospital, the fifth hospital in the city to get full NABH accreditation.

Unity Hospital was established in 1978 under the leadership of its chairman and medical director Dr C P Habeeb Rehman with the aim to provide patients with a safe, economical and comfortable environment to avail healthcare services.

Since its inception, they have been consistently providing high quality and up-to-date preventive and curative health services to a population spread across the western coast of Karnataka and northern Kerala.

The NABH accreditation strengthens the vision of the hospital - ‘To be recognised, respected and be the most preferred health care service provider’ and the hospital’s mission – ‘To provide patients with quality healthcare services in a comfortable, caring and safe environment’.

The challenges ahead for healthcare providers are many. Unity Hospital’s pursuit of excellence is insatiable. Their journey of delivering safe and quality patient care will continue with enthusiasm and dedication.