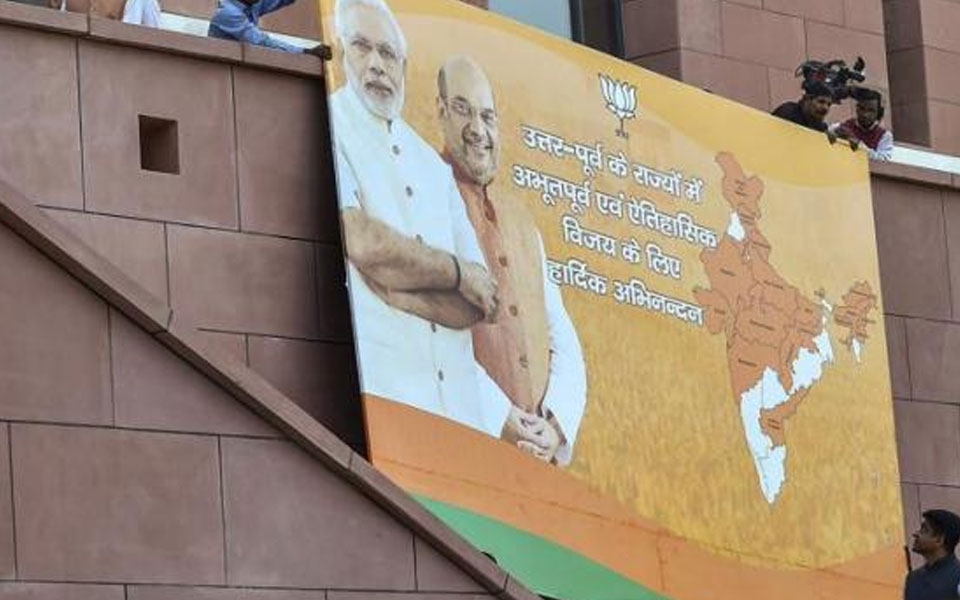 The recent debate around ‘no confidence’ in the Lok Sabha (21st July 2018); brought to fore the policies of the Modi sarkar. Modi Sarkar has failed the country on most of the counts, control over corruption, bringing back black money hoarded in foreign banks, and failed the electoral promises like 15 lakhs in every body’s account, creation of employment for youth, controlling the rising prices, solving the agrarian crisis among others. The points raised by Rahul Gandhi leading the debate did hit the nail on the head. Some other issues, which also need to the highlighted relate to the increasing hate and violence in the society; increasing intimidation and marginalization of religious minorities in particular.

These are well outlined in a report, which has been ignored by major section of media. This refers to the report by civil society groups, brought out on the occasion of completion of four years of Modi Sarkar. Appropriately titled, ‘Dismantling India’, the book is edited by eminent activists, John Dayal, Leena Dabiru and Shabnam Hashmi. (Media House, https://www.amazon.in/Dismantling-India-4-year-Report/dp/9387298396/ref=sr_1_2?ie=UTF8&qid=1532308099&sr=8-2&keywords=dismantling+india ) The report is remarkable as it has essays by writers and activists engaged in issues related to national integration and communal harmony. Twenty two writers, who will be dubbed as 'Pseudo seculars' by the ruling party have recorded the policies of the Modi Government in a meticulous way.

This report draws a broad canvass of the happenings of last four years of Modi rule. The issue of concern, where foot soldiers-lynch mobs, have become very active and have created havoc has been well documented. These mobs look to be spontaneous but are well organized. They get activated by subtle and overt encouragement from the powers that rule. They take law into their hands as they know that they will get away with it. This report, well compiled by the editors focuses on this aspect of the Modi Sarkar, where the myths, biases stereotypes are being promoted; giving encouragement to people to take the law in their hands and to unleash the violence and intimidation against weaker sections of society.

In this report, in a very sensitive and in-depth manner, the authors collective, well known for their concern for preserving the ‘Idea of India’, take the stock of the status of civic rights, human rights and the increasing fearfulness in the society. The articles relate to all aspects of our social life, culture, promotion of divisive Hindutva politics, the culture which is promoting darkness, and opposing the very values which are the foundation of freedom movement of the country. Just to give few examples from the long list; John Dayal in a hard hitting, piece; ‘Lynching and other Consequences of Hate’ shows the mirror to the society on the issues of rising violence. Violence is not spontaneous, it is an outcome of spread of misconceptions and the consequent Hate imposed on the society. There are articles which tell us that during last four years how the Hate against religious minorities is being promoted and is creating an atmosphere where social space is getting communalized in a deeper manner leading to what Harsh Mander calls, ‘Republic of Hate’.

When our Prime Minister talked of plastic surgeon in ancient India, planting elephants’ head on a boy’s head, one could imagine that the ruling dispensation is out to promote blind faith and glorify the past, this glorification of past tells us about the presence of Pushpak Viman, Wi-Fi, TV and what have you. Writers duo Gauhar Raza and Dr. Surjit Singh list all these hilarious sounding pronouncement from our leaders, and tell us that the matter is not just about the statements, our science policy, our funding in matters of science research is diverted away from areas which will focus on the research on the issues related to people’s issues. Panchgavya (a mixture of cow’s dung, urine, milk, curd and ghee) is getting a major funding for research under a high level committee! The whole tradition of scientific Temper promoted by our first Prime minster Nehru and enshrined in our Constitution is being given a go by for such laughable policy of this government.

The education system is being communalized at a very rapid speed, the curriculum of education to promote an obscurantist view of society, to glorify Hindu kings, and to demonize the others’ is part of the agenda of Modi Sarkar. Keran Gabriel brings forth a lucid elaboration of the same. K. Satchidanandan disturbed by assault on our plural traditions emphasis on upholding the diversity of the country in his ‘The Idea of India: The case of Plurality.’ Goldy George draws out attention to the much neglected section of Adivasis in, ‘Adivaisi in Fascist regime.’, while Kavita Krishnan is highlighting the worsening of attacks on women, in her, ‘’Worst ever attacks on Women’s autonomy and rights.’ At the same time the policy related to media and judiciary and its impact of our national ethos makes a very disturbing read.

That’s not all. Editors have done the painstaking job of compiling the data on crucial issues of attacks on civil society and freedom of expression, attack on education, Hate and targeted violence against Muslims, violence against Christians, dalits, lynching’s in the name of Cow and attacks on women. This tabulation of incidents is an invaluable resource to understand the trends taking over our nation. In a way this report while it presents an in-depth picture of the political scenario of the day, brings forth the fact that BJP is a ‘party with a difference’, as it is guided by the politics of Hindu nationalism as enunciated by its parent organization, the RSS. BJP during last four years of its rule has done massive damage to the ‘Idea of India’, which needs all preservation and promotion. Surely this volume is a must read for all those engaged in preserving Human rights, preserving Indian Constitution and committed to the idea of secular democratic India.