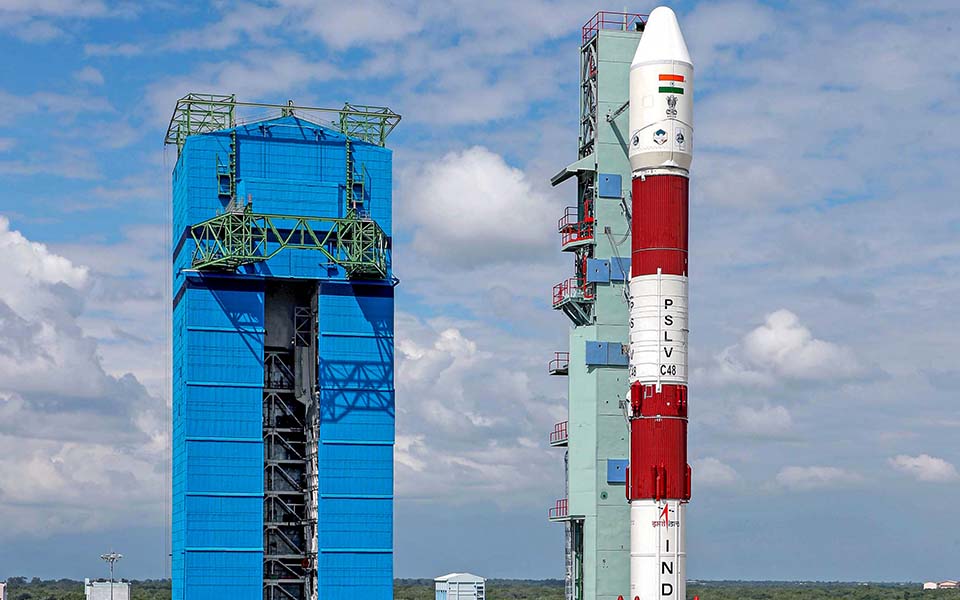 The 44.4 metre tall PSLV lifted off majestically with a thunderous sound, leaving plumes of smoke from the first launch pad at the spaceport here at 3.25 pm.

RISAT-2BR1 was placed into orbit around 16 minutes after the lift off while the remaining satellites were released in their respective orbits about five minutes later.

ISRO Chairman K Sivan and other scientists greeted each other as all 10 satellites were injected into the desired orbit.

Later, speaking from the Mission Control Centre, Sivan said today's mission was a 'historic' one coinciding with PSLV's 50th flight.

"ISRO has made a historic mission.. I am extremely happy to declare that the 50th PSLV vehicle successfully injected RISAT-2BR1 precisely into the 576 km orbit," he said.

RISAT BR1 was a "complex" satellite but was built in a short time, he said and lauded the team behind the effort.

Regarding PSLV, he recalled and acknowledged the contribution of "exemplary leaders" like Dr Srinivasan, Dr Madhavan Nair and others from the conceptualising- configuration stage till date.

Nair had made the vehicle operational, he pointed out.

PSLV's payload capacity has increased from 860 kg to 1.9 tonnes and the "versatile vehicle" has carried 52.7 tonne so far, 17 percent of which was customer satellites, he said.

complimented the scientists the mission a great success.

On future missions, he exuded confidence that team ISRO would as usual rise to the occasion and make them all "grand success."

The 628 kg remote imaging earth observation satellite RISAT-2BR follows RISAT-2B, which was placed successfully in orbit in May this year.

As many as nine other satellites-- six from the US and one each from Israel, Italy and Japan rode piggy back on PSLV-C48.

The satellites are being launched under a commercial arrangement with NewSpace India Ltd.

Of the total 50 missions, 48 have been successful for ISRO.

The PSLV has placed around 310 foreign satellites with the first mission in September 1993.

Some significant launches by PSLV include Chandrayaan-1, Mars Orbiter Mission (MOM) and the record launch of 104 satellites in one go earlier.

PSLV-C48 is the second flight with 'QL' configuration equipped with four strap-on motors on its sides, ISRO said.

The first flight with a similar configuration was launched in April 2019 (PSLV-C45/EMISAT and 28 other satellites).

Apart from being used for military purposes, the key applications of RISAT-2BR1 include agriculture, forestry and disaster management support.

While six satellites from the US would be used for multi- mission remote sensing purpose, the one launched by Italy was aimed at taking up search and rescue.

A radar imaging earth observation satellite built by Japan and another by Israel were also launched.

The launch of PSLV-C48/RISAT-2BR1 is the sixth launch made by ISRO in 2019. The mission life is five years, ISRO said.

#RISAT2BR1 satellite successfully placed in orbit by #PSLVC48
Here's a picture of satellite separation captured by onboard camera pic.twitter.com/OssPM4uwsG