Fact Check: Muslim women did not sing Ram Bhajan in Dubai mosque as claimed by a viral video 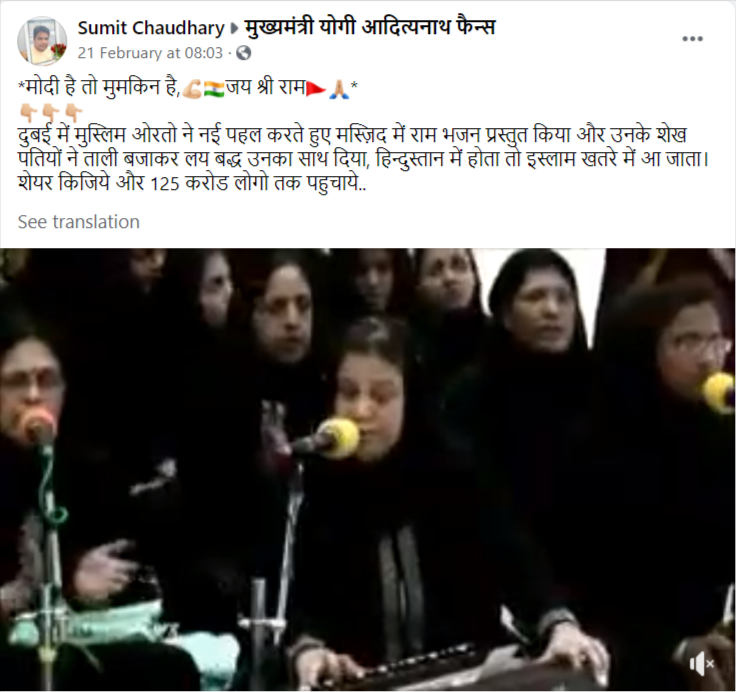 Bengaluru: In a viral video that is being widely shared across social media platforms several Burqa-clad women are seen singing Ram Bhajan. The video is being shared with claims that the video was shot in a Dubai mosque where the Muslim women were singing the Bhajan.

In the video, several men are also seen wearing Arab attires suggesting that the Arab leaders enjoyed Ram Bhajan and lauded the women singing it. Claims also add among the women singing Bhajans, there were many from the Arab community as well.

The video has gone viral several times in the last five years and several news agencies including ABP News, The Quint, and Alt News have fact-checked the story and have nulled the claim over the years.

The video actually dates back to 2012 and is being shared with various claims and captions ever since. The latest claims are being made in the Kannada language adding that the Muslim women sang Ram Bhajans in a mosque in Dubai and the Sheikhs of Dubai were seen dancing during their performances.

The video was earlier shared with a caption in Hindi, translated to: “If Modi is there then it is possible, Jai Shri Ram, Muslim women in Dubai performed Ram Bhajan in the mosque while taking a new initiative and their Sheikh husbands clapped and supported them. If it was in India, Islam would have been in danger. Share and reach 125 crore people)”.

While the participants in the video are certainly Muslim & are singing bhajans, it is not in a mosque or in Dubai, as claimed.

The video has been widely shared on Youtube and several other social media platforms.

The video is in fact from Sathya Sai Baba’s ashram in Puttaparthi — Prashanti Nilayam in Andhra Pradesh, India.

SO WHO ARE THE WOMEN IN THE VIDEO?

The original video, shared by Radio Sai, dates back to 10 July 2012, and the singers are from Region 94 of the Sri Sathya Sai International Organisation (Bahrain, Iran, Kuwait, Oman, Qatar, Saudi Arabia, Syria, Turkey and United Arab Emirates), a fact-check report of The Quint had earlier claimed.

The viral video has been edited from the original video and can be traced back to 44:00 minutes in the former.

Clarifying the video over an email interaction with The Quint, the Sathya Sai Baba International Organisation said that while not all the participants seen in the video are Muslims or Arabs, some of them most definitely are.

“Devotees often perform in Prasanthi Nilayam, dressed in the traditional attire of the countries/regions they represent and that explains their appearance. But it is a regular event in Puttaparthi, of people from different religions and nationalities coming together and chanting Vedas, singing bhajans, Christmas carols, and Sufi songs.”

The clarification added that such events were often held in Prashanti Nilyayam to signify the unity of religions, which was one of Sathya Sai Baba’s primary messages to his devotees.

In conclusion, the video of burqa-clad Muslim women singing bhajans is not from a mosque in Dubai, but from a cultural event organized at Sathya Sai Baba’s ashram in Puttaparthi, Andhra Pradesh.