Dharampal Gulati: From a 'refugee' to India's 'King of Spices' New Delhi, Dec 3: Mahashay Dharampal Gulati was 24 at the time of Partition and his family, which had a stable business of spices in Sialkot in undivided India, was among the millions caught in the deadly riots.

The family had to leave behind its ancestral home, cattle and most importantly 'Mahashian di Hatti' - the spices' shop founded by his father in Bazaar Pansaariyaan in Sialkot.

Life changed dramatically for Dharampal Gulati when his joint family in Sialkot reached Amritsar first and eventually to a ramshackled house with a broken roof in Delhi soon after Partition, struggling to make ends meet.

He had reached Delhi on September 27 on a train with two more relatives and Rs 1,500 in his pocket to live with a sister who had managed to claim one of the abandoned houses in Karol Bagh for them," according to book "Divided by Partition, United by Resilience".

"It was a small house with hardly any place to sleep. There was no running water, no latrine," says Mallika Ahluwalia, who interviewed Gulati for the book, published in 2018 by Rupa.

In Delhi, Gulati got his family's details registered with the government for a 'refugee card' that entitled them to basic ration.

A class 5 dropout, Gulati tried his hand at running a horse carriage and selling sugarcane to make some money, months before returning to his ancestral trade and establishing what would become the iconic MDH brand of spices over the years.

"I was wondering what I should do... One day, while roaming around, I reached Chandni Chowk. People were selling tangas (horse carriages) there. I asked them how much they were selling for. I bargained a little bit and finally got a tanga for 650," the book quoted him as saying.

He had decided that he would try to earn his livelihood as a tanga driver, while also taking the opportunity to acquaint himself with his new hometown.

However, Gulati soon realised that he was not enjoying this new profession. He found the other tangawallahs uncouth, and the work draining, with little monetary reward. He then tried opening a small stall to sell cane sugar, but he saw no prospects in this either, and soon shut it down.

Meanwhile, more and more relatives started arriving, particularly his parents and the rest of the family who had stayed back in Amritsar. Their little house was soon overflowing with extended family members, but they could not turn anyone away, says the book.

"The family was struggling to make ends meet," it states.

Despite an "initial hesitation" about going back to spice trading, Gulati soon realised that this was the trade they knew best and that could help them find their feet again and started with a small wooden roadside shop.

"Life was tough. Dharampal remembers that the lack of a latrine in the house meant that they would have to queue up each morning at a public municipal latrine. The family had to live frugally, especially given the large extended family that had joined," the book says.

To grow the business, he gave an ad in a popular Hindi newspaper, Pratap - 'Mahashian di Hatti of Sialkot Deggi Mirch Waale'.

"This proved to be a winning solution. Within days, they started getting numerous orders by mail. One of the first was all the way from Cuttack in Odisha from a businessman who had migrated from Multan," according to the book.

"The business started growing. Dharampal decided to open one more shop in the main spice market in Delhi, Khari Baoli, and then soon another. Meanwhile, they had also put in a claim with the Ministry of Rehabilitation for the shop and property that they had left behind in Sialkot. They were allotted a plot in Gaffar Market," it states.

During the initial years, Gulati persevered 12 to 15 hours a day to establish his business and he personally made sure high-standard quality of his products to the extent that he called off a tie with a business partner who would mix lentils in the spices to reduce selling rates.

In 1949, he had the novel idea of packaging spices in well-designed boxes. By 1954, he had earned enough to afford a bigger house for the family and by the 1960s he had established a factory - MDH masale, according to the book.

"From a child who dropped out of school at an early age, Dharampal went on to compete with and outmanoeuvre the highly educated CEOs of many consumer goods multinational companies," Ahluwali writes.

Gulati passed away Thursday morning in a Delhi hospital, leaving behind a business empire worth over a thousand crores. 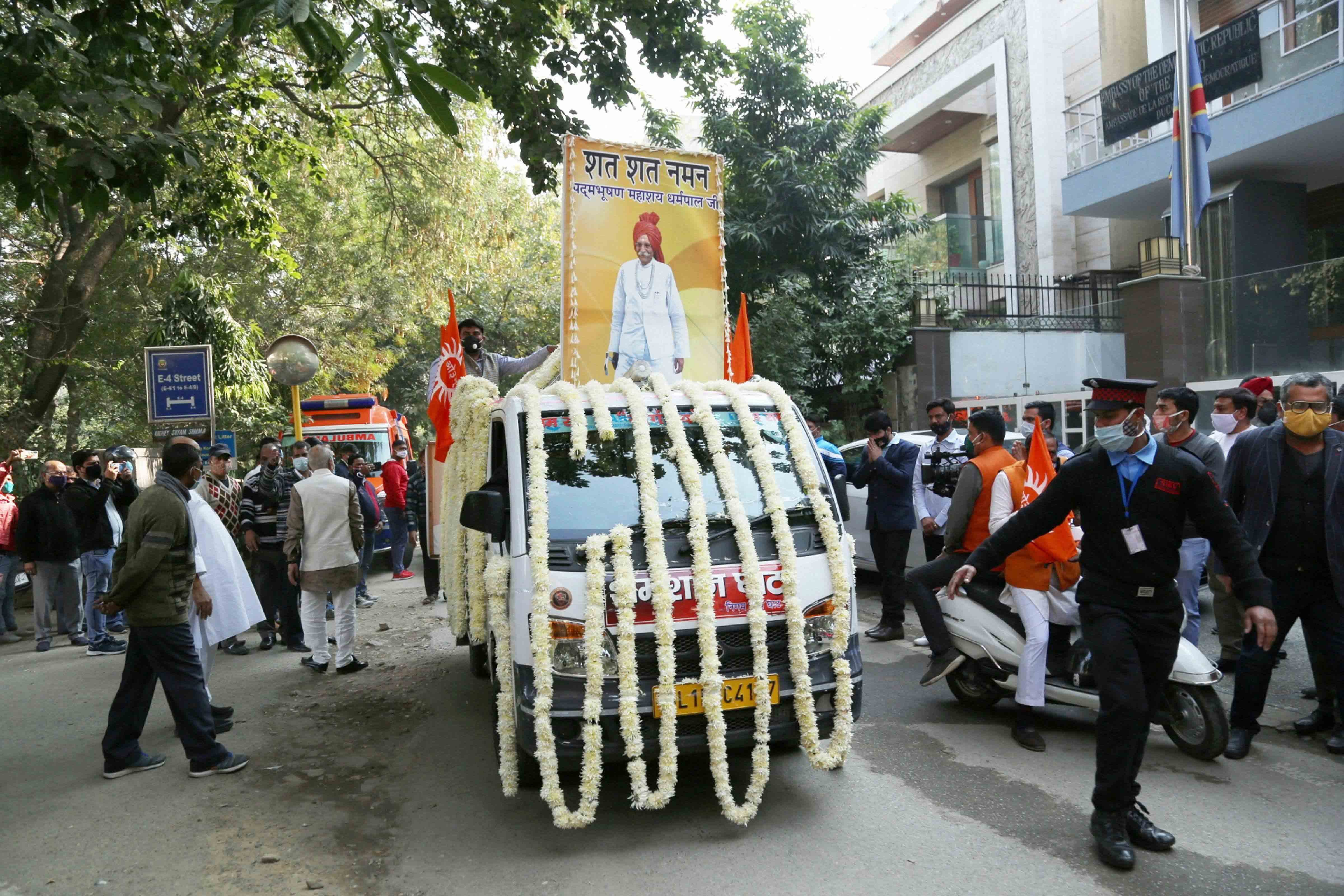 New Delhi: A vehicle carrying the mortal remains of MDH Group Chairman Dharampal Gulati on its way to a crematorium for his funeral