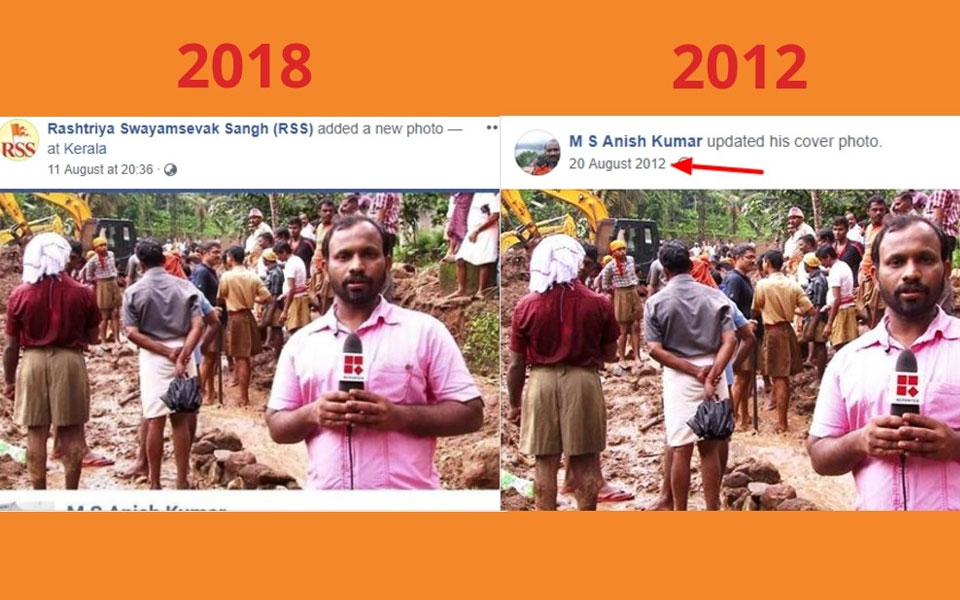 A set of images along with a donation appeal was shared by the official Rashtriya Swayamsevak Sangh (RSS) Facebook page with the claim that the individuals in the images were Seva Bharati workers aiding Kerala flood victims. One of the images shared as part of this set shows a reporter with many people standing in the background including a few wearing khakhi shorts resembling the old RSS uniform.

The image was also widely circulated by many on social media, including the Twitter handle Friends of RSS, which describes itself as an “independent initiative by Swayamsevaks”.

The image is from 2012 Kerala floods

The photograph shared by RSS is not of the recent Kerala floods and was taken during the 2012 floods in the state. The reporter in the image had shared the image that same year.

In August 2012 flash floods triggered by heavy rains in Kozhikode and Kannur districts in north Kerala took the lives of nine people. An image of this event was shared as RSS workers providing aid during the recent Kerala floods. However, this isn’t the only old image reshared with a false narrative.

Purported images of RSS workers providing aid and relief to flood-stricken Kerala was widespread on social media with captions carrying a tinge of irony – “Looks like Kerela couldn’t kill all of those RSS Terrorists. Few of them are still alive and are looting the poor flood-struck Keralites.”

Looks like Kerela couldn't kill all of those RSS Terrorists. Few of them are still alive and are looting the poor floodstruck Kerelaites.

Where the hell is PFI, shouldn't they be saving these 100% literate civilians from these chaddi clad barbarians? pic.twitter.com/xPYqVr1Qht

But when "God's Own Country" crumbled due to severe floods it is the same RSS that saved people & provided them with relief.

This Humanitarian efforts by Nationalists will not be showcased by the Paid Media. pic.twitter.com/IY8iudPEkC

However, these images are actually from Gujarat last year and not Kerala. SM Hoax Slayer found identical images being circulated of RSS workers providing aid during Gujarat flood in August 2017. Multiple users on Facebook had shared the images.

Severe monsoon flooding killed at least 213 in Gujarat last year. Over one lakh residents had to be relocated due to submergence of their homes.

Old or unrelated images have been attributed to RSS several times in the past. In 2015, images of RSS workers in Gujarat was shared as them providing aid during the Nepal earthquake.

Dattatreya Hosabele, a senior RSS functionary based in Nepal, had denied the claims on social media as reported by Nistula Hebbar, the political editor of The Hindu.

Further, the official Twitter handle of RSS had also denied the claim of 20000 RSS workers having reached Nepal.

Recirculating old images as part of a recent or an unrelated event is a mischievous attempt to misinform people. It is advisable to verify photographs viral on social media before believing in them.