A nationalist, a gifted orator and the Bharatiya Janata Party’s Jawaharlal Nehru – here’s what the Indian newspapers had to say about Atal Bihari Vajpayee who passed away on Thursday, 16 August. International media, too, paid their tribute to the nonagenarian – calling him “instrumental in strengthening India’s international ties”.

Here are our top picks.

Vajpayee’s sin was that he had crafted the early BJP as a secular, socialist legatee of the Janata party; he had also opposed the Ayodhya movement. It was Advani who was the RSS’s choice for PM for the 1996 elections. But in November 1995 in Bombay, Advani announced Vajpayee as the prime ministerial candidate – to the astonishment of those on stage, and dismay of the RSS. From then on, Vajpayee could not be toppled – becoming prime minister in 1996, 1998, and in 1999 – while Advani withdrew to number two. 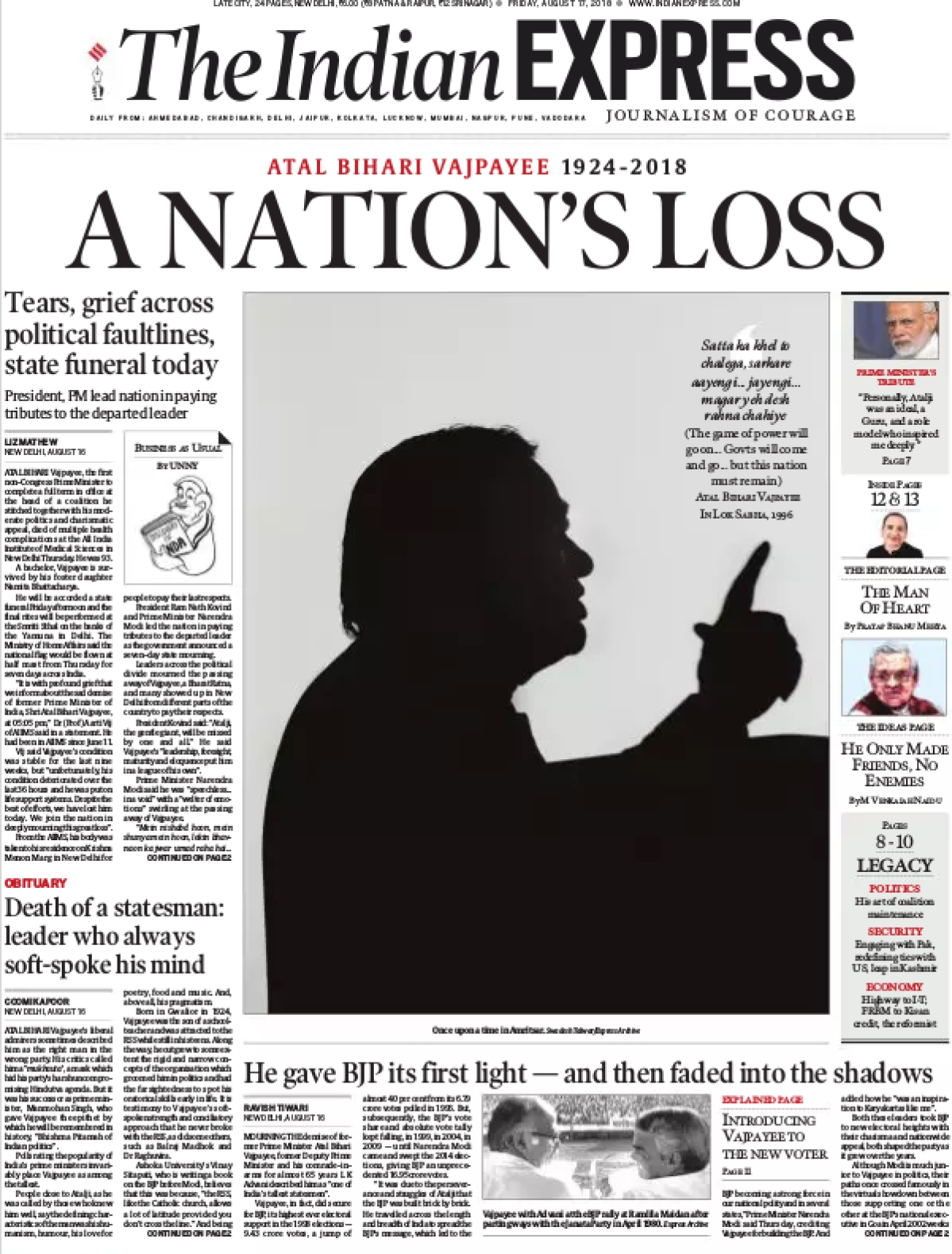 Atal Bihari Vajpayee: A Gifted Orator Whose Stories Always Had a Sting in the Tail

Vajpayee’s oratory was legendary. He had the ability to craft a compelling story out of nothing and hold his audiences spellbound. What people looked out for was not what he spoke on but whether there was a usual small sting in the tail. I recall a national council meeting in Jaipur just before the 1991 election when the talk was on an impending Ram toofan. “The problem with the toofan,” he rued “is that we have to be careful not to get blown over ourselves.” Then, with the cryptic tone the party had come to associate with him, added: “The BJP is not a dharma sabha. It is a political party.” The remarks said it all.

– Swapan Dasgupta, The Times of India 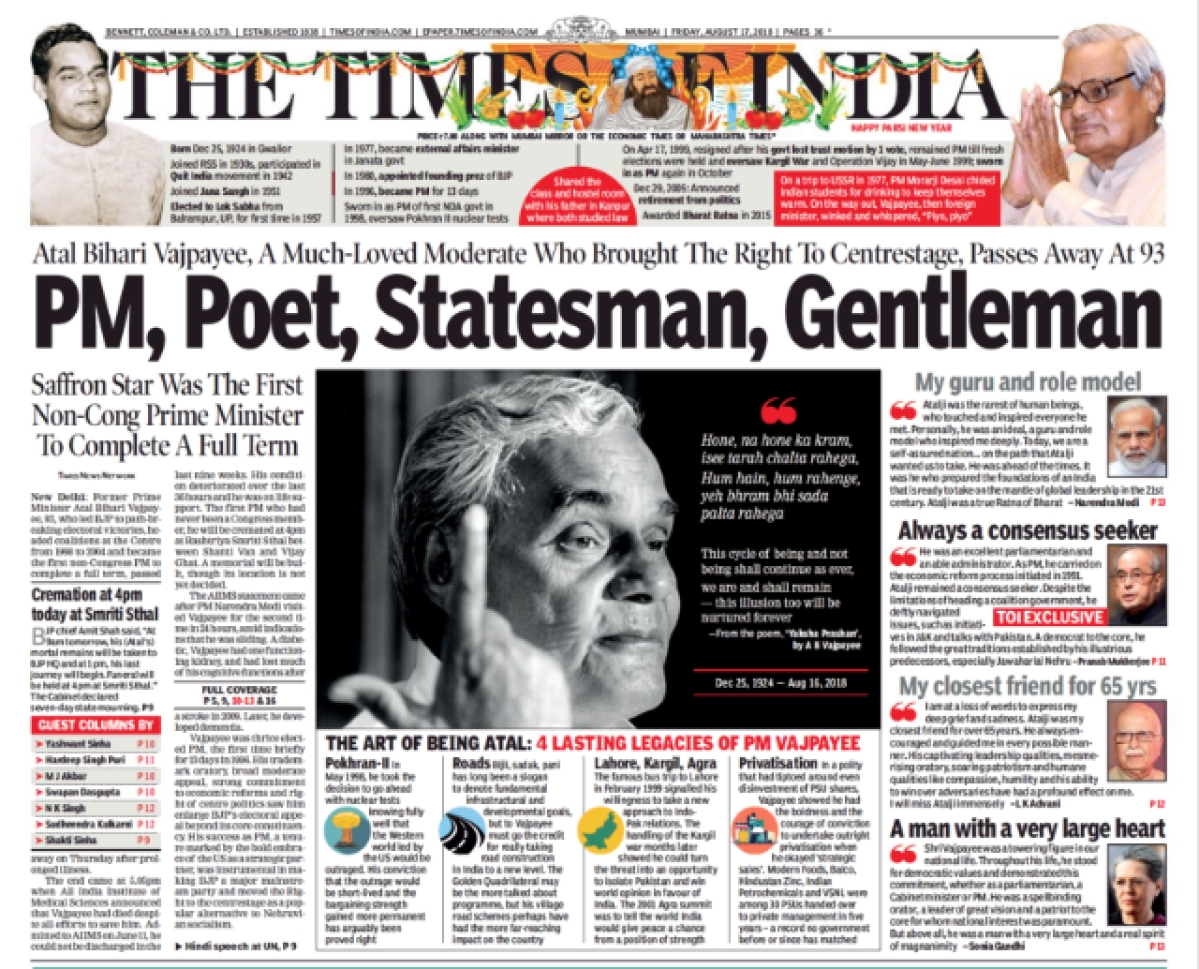 Why Atal Bihari Vajpayee Was the BJP’s Pandit Nehru

As PM, Vajpayee recalled in a speech in Parliament how he got restored in South Block’s corridor a portrait of Nehru he would notice while walking in, during his years in the Opposition. “I just had to ask as who removed it and the portrait was back at the assigned place,” the BJP veteran remarked. He never shied of wearing as a badge his admiration of Nehru – and the latter’s fondness of him as a young leader who could be PM one day. 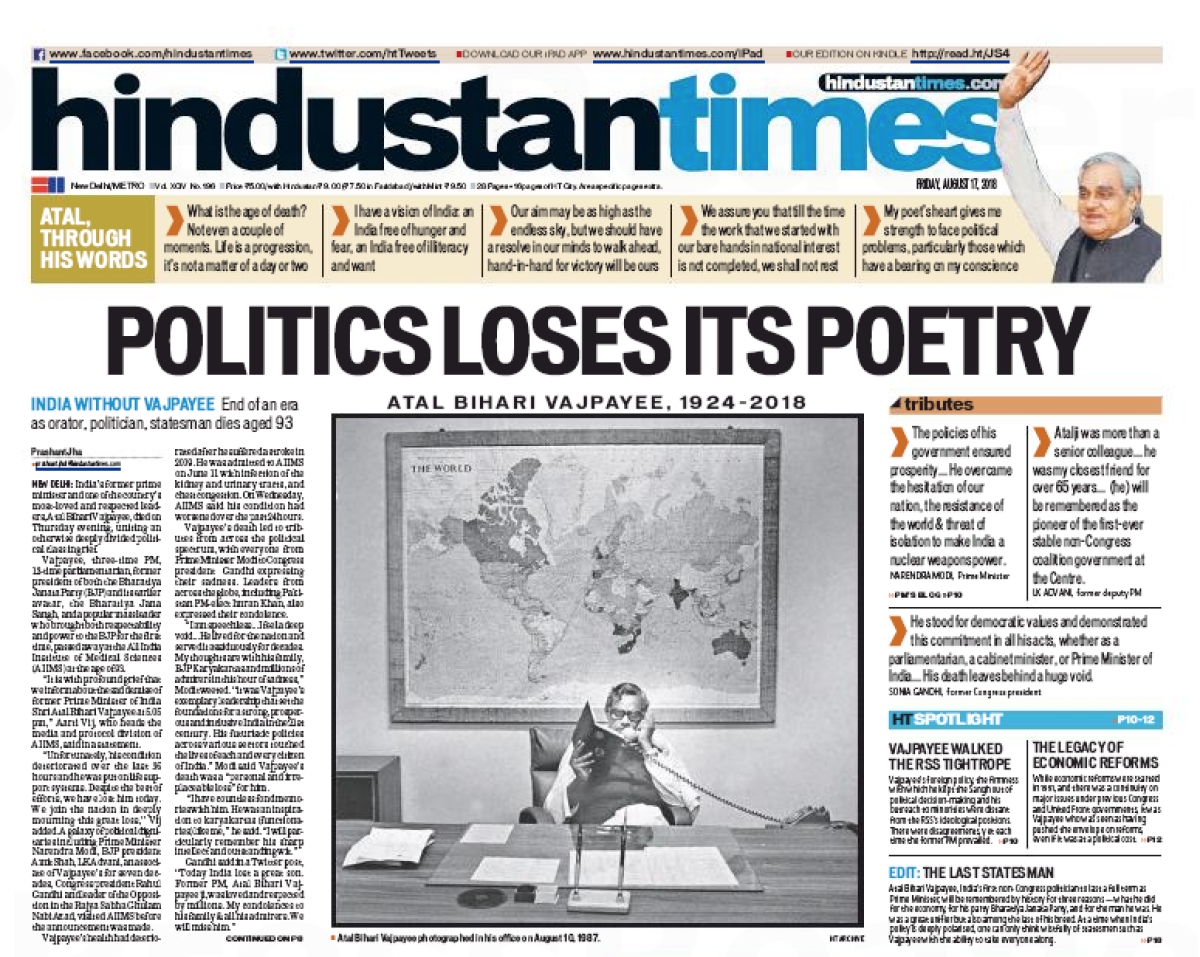 Vajpayee: A Colossus, Unaided by Machines

...It would not be an exaggeration to say that when the news of the former Prime Minister's death was finally announced this evening, millions of Indians – including those who do not and never have subscribed to the ideology of the RSS or the BJP – felt a genuine sense of loss and grief. Only true mass leaders with that indefinable quality called charisma, unaided by the modern-day publicity machine of 24/7 television and relentless social media chatter, can evoke such emotions among vast swathes of people who never met them. 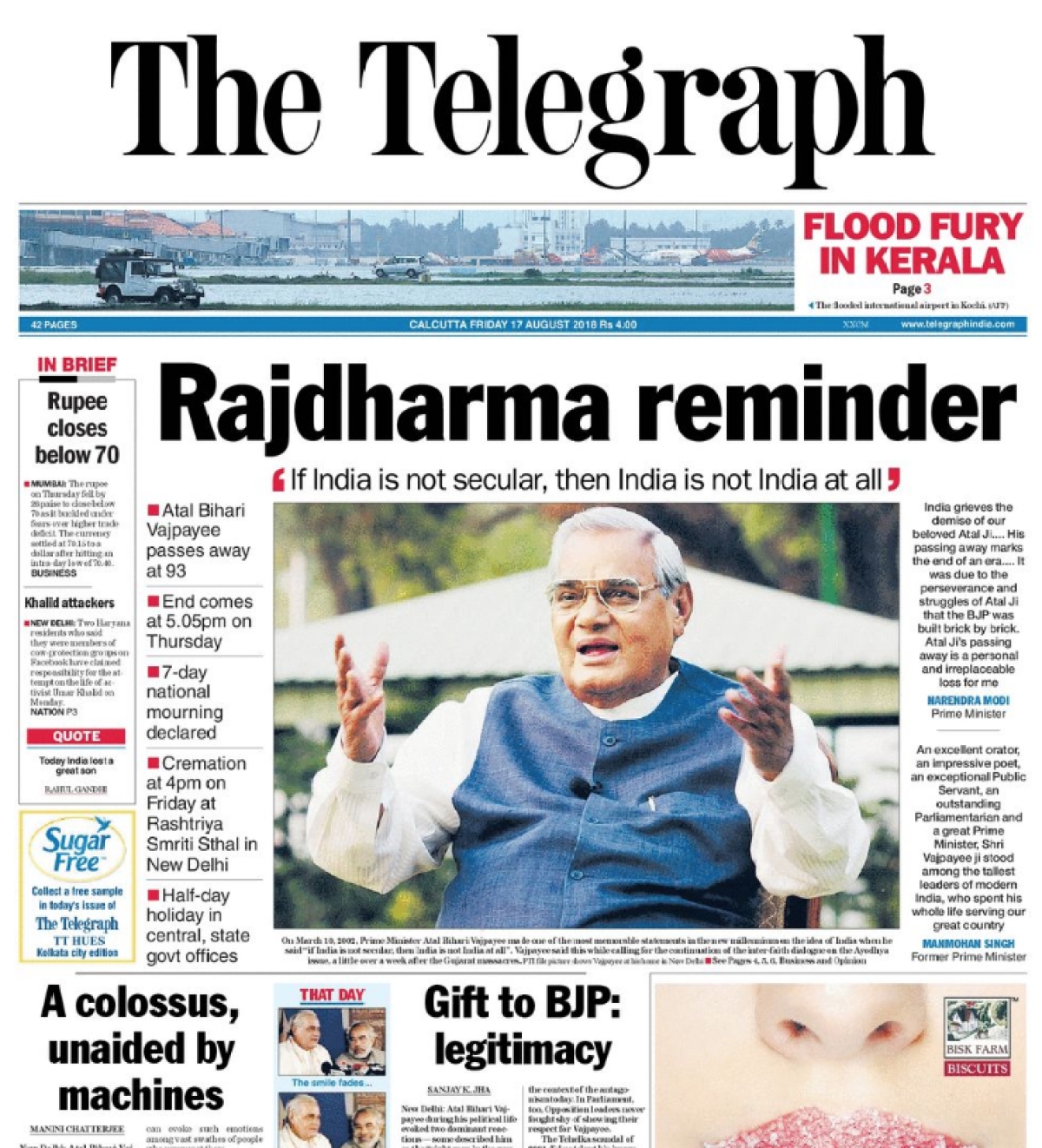 Atal Bihari Vajpayee Created a Peace Template for the Subcontinent

Atal Bihari Vajpayee’s most enduring legacy as Prime Minister is that he attempted to liberate India from the prison of the past with regard to two of the most intractable historical problems – Kashmir and Pakistan. That he did not succeed is evident. Indeed, when he demitted office in May 2004 after failing to win a renewed mandate in the elections to the 14th Lok Sabha, any lasting solution to the Kashmir issue, or to normalisation of India-Pakistan relations, seemed a long way off, even though some footprints of progress made during his tenure in office were undeniably visible. 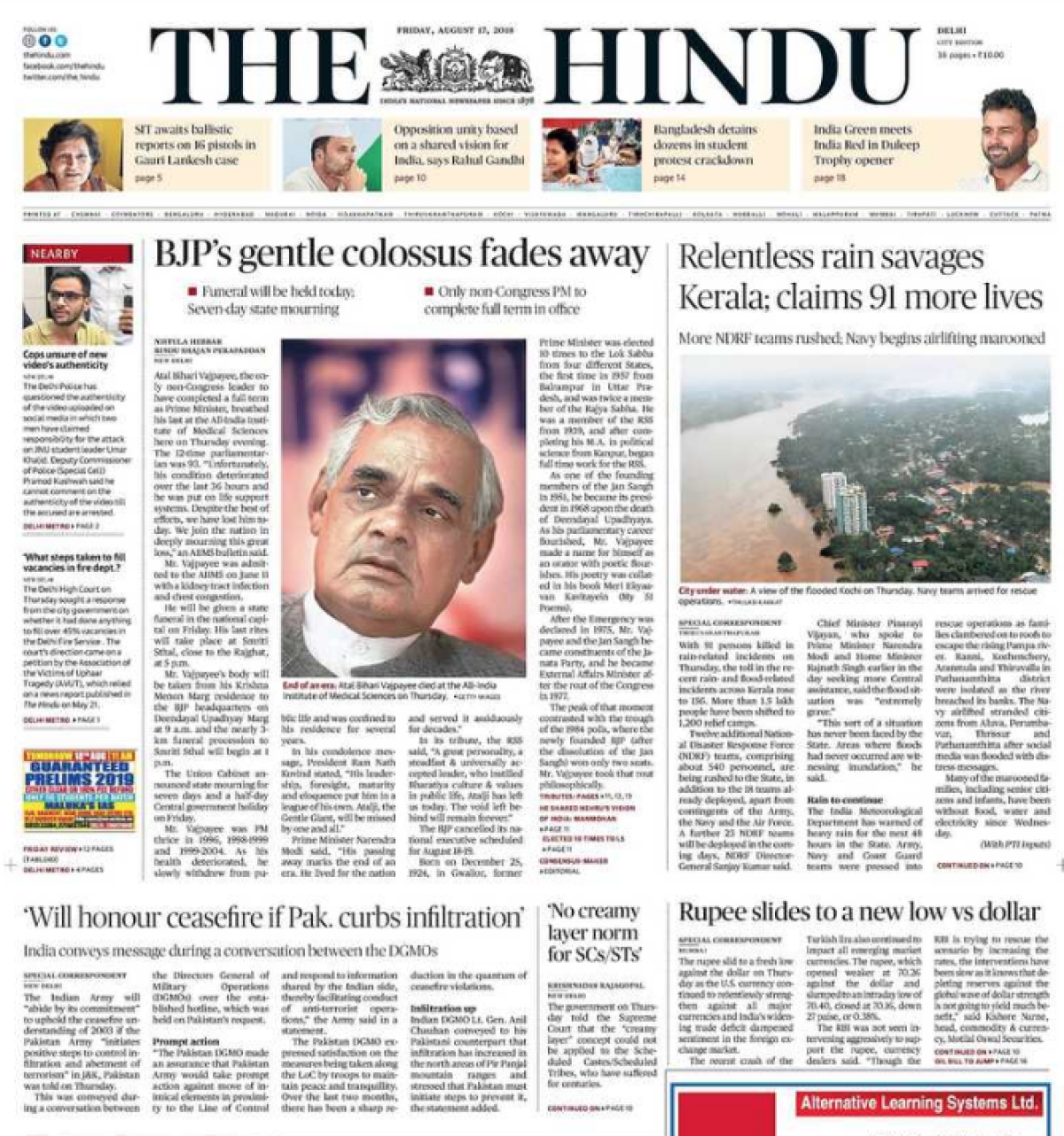 Mr Vajpayee – the Face of the World’s Most Populous Democracy

A published poet, Mr Vajpayee dabbled in law, journalism and rebellion against British colonialism as a young man. A leader of the Hindu nationalist opposition to the once-invincible Indian National Congress party of Gandhi and Nehru, for most of his 50 years in politics he was virtually unknown outside India.

But for six years in his late 70s, Mr Vajpayee was the face of the world’s most populous democracy, a nation of one billion whose ethnic, religious and regional conflicts had fomented massacres, three wars with Pakistan and internal strife for a half-century after independence from Britain in 1947.

In 1951, Mr Vajpayee joined the newly formed political party called the Bharatiya Jana Sangh, the predecessor of the BJP. Later, he became the party’s leader and began a long parliamentary career. He served as foreign minister in the late 1970s in a coalition government. Under Mr Vajpayee’s leadership, the old Bharatiya Jana Sangh was reborn as the BJP in 1980.

An orator who peppered his speeches with wit and lines from his own poems, Mr Vajpayee was viewed more as a kind of philosopher-king and less as a hard-nosed politician.

His Masterful Oratory Attracted Tens of Thousands to His Rallies

The former journalist and poet-turned-politician was one of the few opposition lawmakers inside Parliament when India’s first prime minister, Jawaharlal Nehru, still held office. Nehru was PM from 1947 until his death in 1964.

Vajpayee’s more than five-decade-long career peaked in the 1990s, when his masterful oratory attracted tens of thousands to his rallies across the country.

Canada will always be there to defend the right of peaceful protest: Canadian PM Trudeau 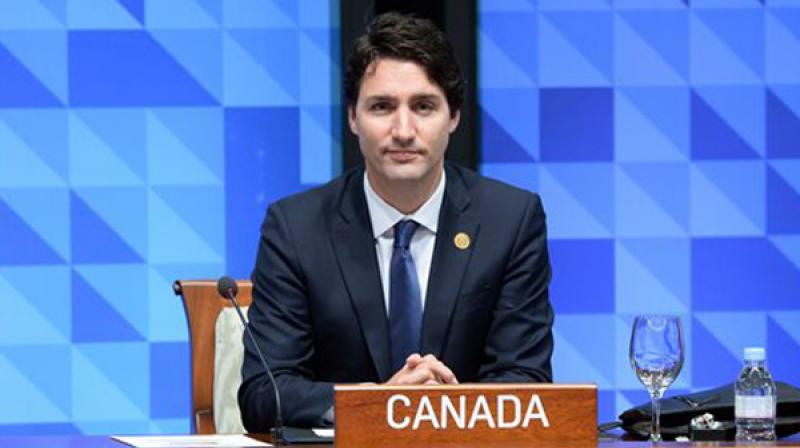 Toronto, Dec 1: Canadian Prime Minister Justin Trudeau has said that his country will always be there to defend the right of peaceful protest, as he reached out to the Indian community and expressed concern over the ongoing farmers protest in India against the new farm laws, the first world leader to voice his views on the issue.

Addressing the Indian community in Canada during an online event on Monday to mark the 551st birth anniversary of Guru Nanak Dev, Trudeau said he would be remiss if he didn't recognise the "news coming out of india about the protest by farmers."

Thousands of farmers stayed put at various Delhi border points for the sixth consecutive day on Tuesday protesting against the new farm laws, which they fear will dismantle the minimum support price system and corporatise farming.

The farmer unions on Tuesday decided to attend a meeting with the government after they were invited by Agriculture Minister Narendra Singh Tomar for talks, two days ahead of a scheduled meeting.

"The situation is concerning and we are all very worried about family and friends and I know that is a reality for many of you," Trudeau said in the video posted on his Twitter account.

"Let me remind you, Canada will always be there to defend the right of peaceful protest. We believe in importance of dialogue and that is why we have reached out through multiple means directly to Indian authorities to highlight our concerns," he said.

He said that this was a moment for all to pull together because of COVID and because of everything else as well.

"We are going to be there to continue to work together as we are there to help each other," he said.

Extending his greetings on Guru Nanak Dev's birth anniversary, he said that it is really an "important time to come together even more so this year than normal because COVID is keeping us all separate."

"Being able to come together and celebrate like this is really wonderful," he said.

Canada is home to a large number of Indian migrants, mostly from Punjab.

New Delhi: The Supreme Court Tuesday rejected the appeal filed by Chanda Kochhar against the Bombay High Court order which had dismissed her plea against being removed as the managing director and CEO of ICICI Bank.