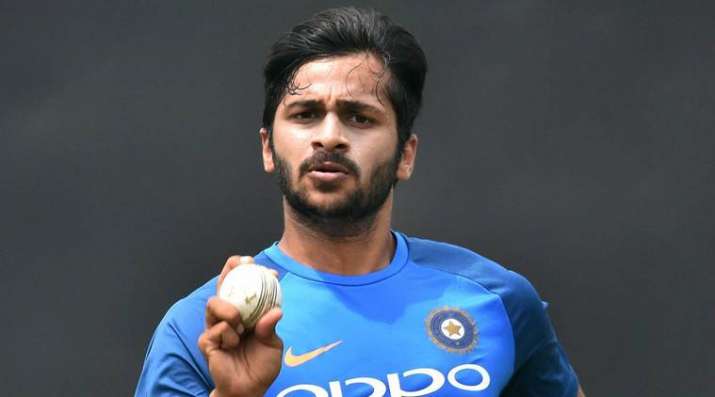 New Delhi, Oct 13: Fast bowling all-rounder Shardul Thakur on Wednesday replaced Axar Patel in India's squad for the T20 World Cup to be held in the UAE and Oman from October 17.

The 29-year-old Thakur has impressed with his 18 wickets in the ongoing IPL for Chennai Super Kings. With this, India completed the announcement of its final squad for the marquee tournament. Teams are allowed time till October 15 to finalise changes.

"The All-India Senior Selection Committee after a discussion with the team management has added Shardul Thakur to the main squad. All-rounder Axar Patel, who was part of the 15-member squad will now be on the list of stand-by players," BCCI secretary Jay Shah said in a statement.

With pace all-rounder Hardik Pandya not bowling during the IPL because of fitness issues, the selectors wanted a cover for him. The Mumbai Indians star's workload management is a major concern for the team management.

"The selectors felt that they were one pacer short and also with Hardik Pandya not bowling, they needed an all-rounder in the main squad," a source close to the selection committee told PTI.

"Axar remains in stand by and if Ravindra Jadeja gets injured, he will again be back in main team. Till Jaddu (Jadeja) plays, Axar won't be required."

As reported by PTI, the selectors also included Harshal Patel among the net bowlers for the Indian team.

Among the stand-by players, Railways leg-spinner Karn Sharma, who is part of the CSK right now, was a surprise inclusion.

Considered a close confidante of Mahendra Singh Dhoni, who has been roped in as mentor of the national side for the World Cup, Sharma is retained year after year by CSK without playing too many matches as it is believed that he has been the franchise's "Lucky Mascot"

Leg-spinner Yuzvendra Chahal could not find a place despite an impressive IPL with Royal Challengers Bangalore. He claimed 18 wickets in 15 matches.

India will open their campaign on October 24 against Pakistan.