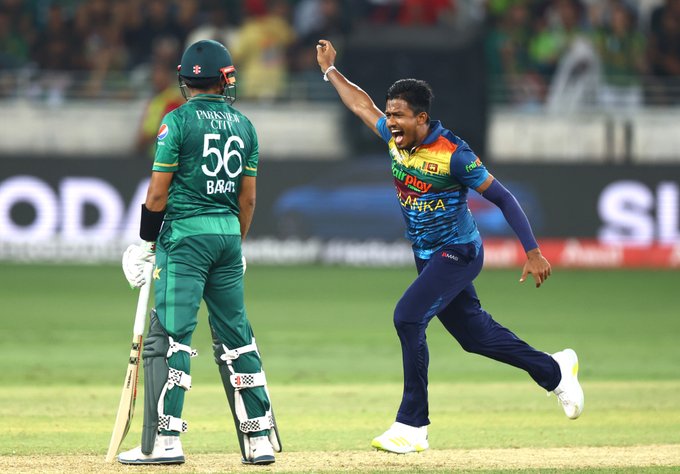 It was a victory that was just not about cricket but way beyond that with much deeper historical and political importance.

It was one for posterity as Sri Lanka first raised themselves from the dungeons to reach 170 for 6 from a hopeless 58 for 5 because of Bhanuka Rajapaksa's 45-ball-71, easily one of the best knocks under pressure in T20s in recent times.

If that wasn't enough, Pakistan, who were cruising along at 93 for 2, were finally bowled out Pakistan for 147 as pacer Pramod Madushan (4/34 in 4 overs) and leg-spinner Wanindu Hasaranga (3/27 in 4 overs) ensured that the few thousands of Sri Lankan fans out cheered the 20,000 odd Pakistan fans.

The 17th over by Hasaranga that served as Pakistan's death knell with three wickets falling in quick succession.

It was Rajapaksa, who laid the foundation, Madushan, who built the structure and Hasaranga, who gave the finishing touches.

Sri Lanka don't have prima donas like the 'Men in Blue' but a team of good cricketers who have understood how to win crunch matches from the dead.

The whippy right-arm fast medium Madushan, who got Babar Azam (5) and Fakhar Zaman (0), gave Sri Lanka the upper-hand at the start of the chase.

While Babar was guilty off flicking a wide long hop down leg side straight into short fine leg fielder's hands, Fakhar dragged an angular delivery back onto stumps.

Rizwan (55 off 49 balls) as usual played the sheet anchor's role hitting the odd boundaries as Iftikhar Ahmed (32 of 31 balls) started hitting after 10 overs but Madushan coming back for his second spell had him holed out in the deep.

If there was one difference between the sides, it was fielding. While Pakistan were poor on the field dropping catches, Sri Lankans took some smart catches and were outstanding in the deep mid-wicket bounary.

At one point, even the spectators got frustrated with Rizwan's push and prod game which is good for totals in the 150 range but not the 170 plus ones. Finally when the pressure went above critical limit, Hasaranga had him caught at deep.

It was a good toss to win for Babar as Pakistan pacers started with a bang before Rajapaksa's brilliance ensured a challenging total for the islanders.

Rajapaksa's calculated assault at the death saw 50 runs being scored off last 4 overs.

Young Naseem Shah (1/40 in 4 overs) and the uber cool Haris Rauf (3/29 in 4 overs) bowled with a lot of pace and fire extracting movement off the track as they broke the backbone of the Lankan batting within the Powerplay overs before Rajapaksa scored one of his finest fifties considering the situation that his team was in.

Rajapaksa and Wanindu Hasaranga (36 off 21 balls) added 58 quick runs after Sri Lanka were left gasping for breath at 58 for 5.

There was another 54 run stand with Chamika Karunaratne and Sri Lanka did cross the 160-run mark.

Shah, the 19-year-old pace sensation bowled one of the most lethal off-cutters seen in this tournament as it pitched back of length but moved in sharply, giving no time to in-form Kusal Mendis (0) to bring his bat down.

While Dhananjaya de Silva (28 off 21 balls) did hit some picturesque cover drives, there was no support literally from the other end.

However Rajapaksa with his all-round strokeplay did give Sri Lankan total lot of respectability. He hit six fours and three sixes and the flick off Naseem for a maximum was a treat for the eyes. Equally good was was ramp flick off Naseem that went for four before a slashed six over cover point took Lanka to 170.

When Shadab bowled a googly or Iftikhar managed an off-break, Rajapaksa played some deft late cuts as Babar was seen getting a bit restless.