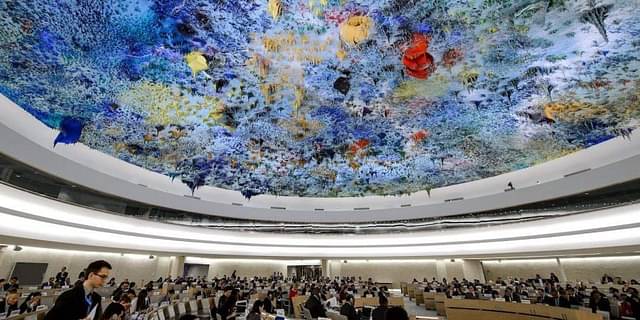 United Nations, Oct 14: India was re-elected to the UN Human Rights Council for the 2022-24 term on Thursday with an overwhelming majority in the General Assembly, with New Delhi's envoy here describing the election as a "robust endorsement" of the country's strong roots in democracy, pluralism and fundamental rights enshrined in the Constitution.

The 76th UN General Assembly held elections on Thursday for 18 new members of the UN Human Rights Council who will serve for a period of three years, starting in January 2022.

India got 184 votes in the 193-member assembly, while the required majority was 97.

"I am truly delighted at this overwhelming support for India in elections to Human Rights Council. It's a robust endorsement of our strong roots in democracy, pluralism and fundamental rights enshrined in our Constitution. We thank all UN Member States for giving us a strong mandate, India's Permanent Representative to the UN Ambassador T S Tirumurti told PTI.

India's Permanent Mission to the UN tweeted "India gets re-elected to the @UN_HRC (2022-24) for a 6th term with overwhelming majority. Heartfelt gratitude to the @UN membership for reposing its faith in India."

India's current term was set to end on December 31 2021. For election for the term 2022-2024, there were five vacant seats in the Asia-Pacific States category - India, Kazakhstan, Malaysia, Qatar and United Arab Emirates.

India's mission congratulated other UN Member States for their election to the Human Rights Council, which consists of 47 Member States elected directly and individually by secret ballot by the majority of the members of the General Assembly.

The members of the Council shall serve for a period of three years and shall not be eligible for immediate re-election after two consecutive terms.

As of January 2021, 119 of the 193 UN member States will have served as a member of the HRC. "This broad membership not only reflects the UN's diversity, but it gives the Council legitimacy when speaking out on human rights violations in all countries, the UN said.

In 2018, the US under the Donald Trump administration had withdrawn from the UN Human Rights Council. US Ambassador at UN Linda Thomas-Greenfield said Washington's election to the Council has fulfilled President Biden's campaign pledge to rejoin the Human Rights Council and the US will work to ensure this body lives up to these principles.

"Our initial efforts as full members in the Council will focus on what we can accomplish in situations of dire need, such as in Afghanistan, Burma, China, Ethiopia, Syria, and Yemen. More broadly, we will promote respect for fundamental freedoms and women's rights, and oppose religious intolerance, racial and ethnic injustices, and violence and discrimination against members of minority groups, including LGBTQI+ persons and persons with disabilities, Thomas-Greenfield said.

We will oppose the Council's disproportionate attention on Israel, which includes the Council's only standing agenda item targeting a single country, she said.

She said the US, as a member of the Human Rights Council, will press against the election of countries with egregious human rights records and encourage those committed to promoting and protecting human rights both in their own countries and abroad to seek membership.

"We hold others to our own standard: while we may sometimes fall short of our own ideals, we must constantly strive to be as inclusive, rights respecting, and free as possible."

She added that in its new role as member, the US can fully participate in the Council's work of protecting and promoting human rights. We will use every tool at our disposal, from introducing resolutions and amendments to wielding our vote when needed. Our goals are clear: stand with human rights defenders and speak out against violations and abuses of human rights.