ICMR issues revised advisory on use of hydroxychloroquine 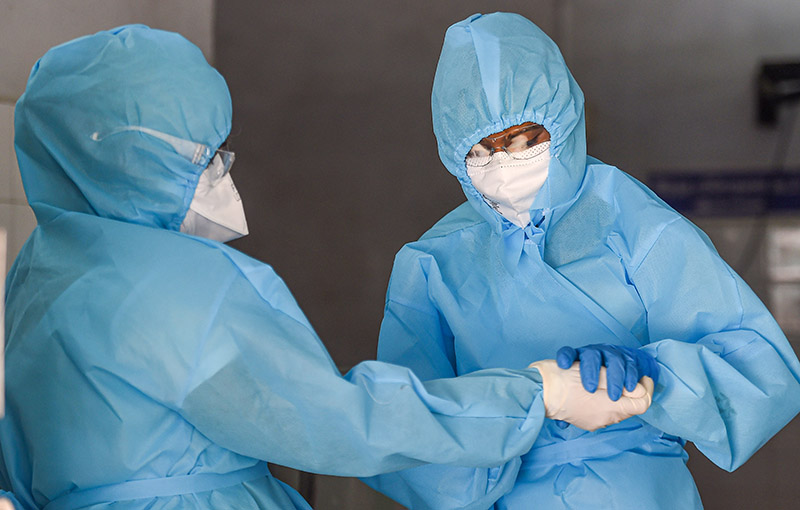 New Delhi: A revised government advisory has recommended use of hydroxychloroquine as a preventive medication for asymptomatic healthcare workers working in non-COVID-19 hospitals, frontline staff on surveillance duty in containment zones and paramilitary/police personnel involved in coronavirus infection related activities.

As was mentioned in the earlier advisory, the drug against the infection is also recommended for all asymptomatic healthcare workers involved in containment and treatment of COVID-19 and household contacts of laboratory confirmed cases.

The revised advisory issued by the ICMR on Friday, however, cautioned that the intake of the medicine should not instill a sense of false security.

The recommendation was made after the Joint Monitoring Group under the Chairmanship of Directorate General of Health Services (DGHS) and including representatives from AIIMS, ICMR, National Centre for Disease Control, National Disaster Management Authority, WHO and experts drawn from central government hospitals reviewed the prophylactic use of hydroxychloroquine (HCQ) in the context of expanding it to healthcare and other frontline workers deployed in non-COVID-19 and COVID-19 areas.

According to the revised advisory, at NIV, Pune, the report of the in-vitro testing of HCQ for antiviral efficacy showed reduction of infectivity and log reduction in viral RNA copy of SARs-CoV2 .

The drug is contraindicated in persons with known case of retinopathy, hypersensitivity to HCQ and cardiac rhythm disorders, it said. The drug is not recommended for prophylaxis in children under 15 years of age and in pregnancy and lactation, the advisory said.

Rarely the drug causes cardiovascular side effects such as cardiomyopathy and rhythm (heart rate) disorders, it said.

"In that situation the drug needs to be discontinued. The drug can rarely cause visual disturbance including blurring of vision which is usually self-limiting and improves on discontinuation of the drug," the revised advisory said.

The drug has to be given under strict medical supervision with an informed consent, it stated.

The National Task force (NTF) for COVID-19 constituted by the ICMR reviewed the use of HCQ for prophylaxis of SARS-CoV-2 infection for high risk population based on the emerging evidence on its safety and efficacy.

The data on assessment of HCQ prophylaxis among 1,323 healthcare workers indicated mild adverse effects such as nausea (8.9 per cent), abdominal pain (7.3 per cent), vomiting (1.5 per cent), hypoglycemia (1.7 per cent) and cardio-vascular effects (1.9 per cent), the advisory said.

However, as per the data from the Pharma covigilance programme of India, there have been 214 reported instances of adverse drug reactions associated with prophylactic HCQ use, it said.

Of these, seven were serious individual case safety reports with prolongation of QT interval on ECG in three cases, it added.

Highlighting the studies on prophylaxis of SARS-CoV-2 infection, the advisory stated that a retrospective case-control analysis at ICMR has found that there is a significant dose-response relationship between the number of prophylactic doses taken and frequency of occurrence of SARSCoV-2 infection in symptomatic healthcare workers who were tested for coronavirus infection.

Another investigation from three central government hospitals in New Delhi indicates that amongst healthcare workers involved in COVID-19 care, those on HCQ prophylaxis were less likely to develop SARS-CoV-2 infection, compared to those who were not on it.

The benefit was less pronounced in healthcare workers caring for a general patient population.

Besides, an observational prospective study of 334 healthcare workers at AIIMS, out of which 248 took HCQ prophylaxis in New Delhi also showed that those taking HCQ prophylaxis had lower incidence of SARS-CoV-2 infection than those not taking it.

According to the advisory, the drug has to be given only on the prescription of a registered medical practitioner and it is advised to consult with a physician for any adverse event or potential drug interaction before initiation of medication, it said.

Front line workers should use PPEs in accordance with the guidelines issued by the health ministry and they should be advised to consult their physician (within their hospital/surveillance team/security organisation) for any adverse event or potential drug interaction before initiation of medication, the advisory said.

If anyone becomes symptomatic while on prophylaxis, he/she should immediately contact the health facility, get tested as per national guidelines and follow the standard treatment protocol, it said.

Apart from the symptoms of COVID-19 (fever, cough, breathing difficulty), if the person on chemoprophylaxis develops any other symptoms, he should immediately seek medical treatment from the prescribing medical practitioner, it said.

All asymptomatic contacts of laboratory confirmed cases should remain in home quarantine as per the national guidelines, even if they are on prophylactic therapy, the advisory added.

Around June 1, a five-minute video of an interview of a woman recorded in the style of an exposé went viral. The woman appears to be an office-bearer and is sitting behind a desk. She says, “These people are terrorists and we are giving them VIP treatment… we are exhausting our resources on them, getting our doctors ill for them…we are using 100 test kits per day on them, if they didn’t exist we wouldn’t need the kits… these people should be hit and kept in solitary confinement… Can’t Yogi ji give an order that state’s resources won’t be used on them.. we are sacrificing Rs 100 crores of the nation for these 20 crores.” The population of Muslims in India is approximately 20 crores.

A mic with the logo of ‘News इंडिया 1’ can be seen in the video. The interviewers behind the camera are trying to gain an official statement from the woman for their news bulletin. As per social media claims, the woman being interviewed is Aarti Lalchandani, the principal of GVSM Medical College, Kanpur.

The social media claims are true. The person in the video is indeed Aarti Lalchandani, the principal of GVSM Medical College in Kanpur. On June 1, several media outlets published a report about the viral video including The Hindu and The Indian Express.

According to The Hindu, “Lalchandani first said that the video was “morphed” and that she did not refer to any community or target Muslims. But in the same breath, she also admitted that she made the comments as a vent during the initial days of the COVID-19 crisis in Kanpur.”

She told both the publications that the local journalist who leaked the video tried to blackmail her and extort administrative favors. However, speaking with Alt News, Lalchandani said that she wasn’t aware of the clip’s existence until it became viral on social media. It is unclear how she could possibly be blackmailed over something that wasn’t in her notice. Moreover, she was unable to provide any evidence of the same.

Omar Rashid, the journalist who wrote the report for The Hindu, tweeted that Lalchandani told the outlet that she had made the comments in anger.

The principal of Kanpur Medical College Arati Lalchandani allegedly calls Tablighi Jamaat members terrorists, says they should be sent to dungeons, jungles & solitary confinement rather than being treated in isolation wards. She told @the_hindu that she made the comment in anger pic.twitter.com/vfM2tVnTaV

In her statement that was sent over WhatsApp, Lalchandani wrote, “THESE ARE NOT MY STATEMENTS GIVEN TO MEDIA but a malicious sting and do not reflect my inner feelings.” She added, “Even a mother in her anger says go to hell to her own children. And then hugs them the next moment. My actions have always spoken louder than words and will continue to do so.  I shall continue serving you all and you can always send to me anyone in need. I work 24 hours for you.”

It is pertinent to note that Lalchandani did not apologize for the racist comments.

Therefore the social media claim associated with the video is true. Aarti Lalchandani, the principal of GVSM Medical College in Kanpur, indeed made derogatory remarks against Tablighi Jamaat members and the Muslim community. She said the country should put them behind bars instead of spending money and resources for their treatment.

Bengaluru: Karnataka Chief Minister, BS Yediyurappa, on Monday once again refused to comment on the dissatisfaction of his party MLAs against the state-run BJP government, and has made it clear that he was only focusing on development of the state and was not paying heed to any such reports.

Mumbai: Superstar Shah Rukh Khan's NGO Meer Foundation has come forward to help the baby whose video of trying to awaken his dead mother at the Muzaffarpur railway station in Bihar went viral on social media.

New Delhi: The decisions taken by the Union Cabinet on Monday will bring about positive changes in the lives of farmers, laborers, and workers, Prime Minister Narendra Modi has said as his government enters the second year in office.