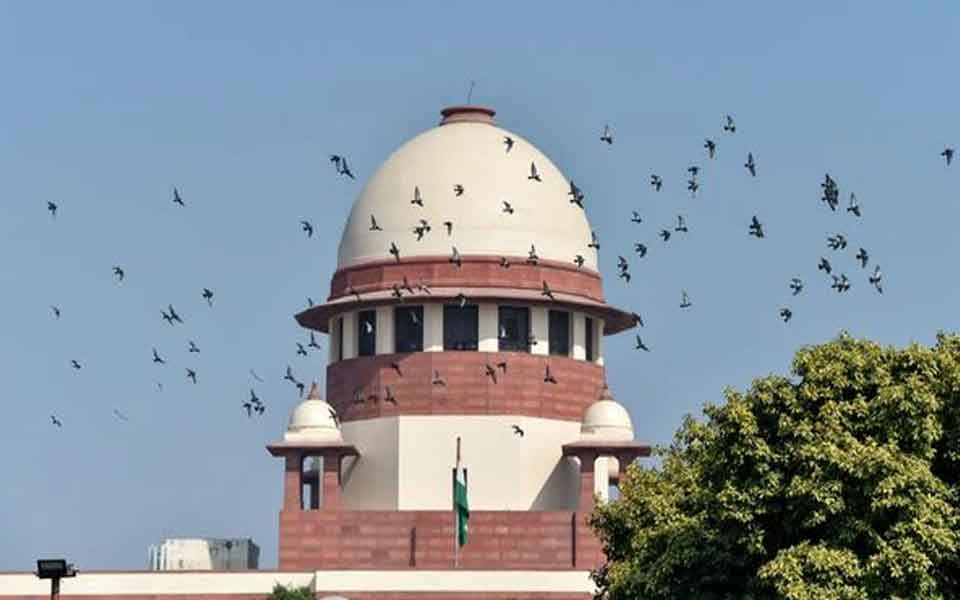 New Delhi: The Supreme Court made it clear on Friday that pendency of the Centre's plea, seeking separate execution of the four death row convicts in the Nirbhaya gang rape and murder case, will not come in the way of trial court's issuing fresh date for their hanging.

Since no pleas of the convicts are pending before the apex court and the mercy petitions of three of them have been rejected by the President -- while the fourth one has chosen not file clemency plea yet, the trial court can issue fresh date of execution, it said.

A bench of Justices R Banumathi, Ashok Bhushan and A S Bopanna listed the Centre's plea against the Delhi High Court order, which had refused to set aside the stay on execution of the four convicts, on February 17.

"We make it clear that the pendency of these petitions may not be treated as an impediment for the trial court to consider the matter on its own merits," the bench said.

Solicitor General Tushar Mehta, appearing for the Centre, said the trial court on February 13 had adjourned the plea of Tihar authorities seeking fresh date for execution of the convicts for February 17, while noticing the fact that a petition challenging the rejection of the mercy petition of Vinay Sharma is pending in apex court.

The bench said Sharma plea has been dismissed today and the trial court can proceed in the matter.

He said the fourth convict Pawan Gupta (25) has till now neither filed a curative petition nor the mercy petition.

Mehta said he anticipates that on February 17, when the matter will come up before the trial court, another writ petition will be filed in apex court.

To this, the bench said that no one can compel anyone to avail of the remedies.

Mehta said, "Article 21 (right to life) is a very valuable right but it cannot be allowed to be used as a weapon to defeat the hands of justice".

The bench said that since trial court has listed the matter for February 17, it would be better that this court wait for the outcome.

It listed the matter for further hearing on February 20.

On February 13, the apex court had appointed senior advocate Anjana Prakash to represent one of the four death row convicts in the Nirbhaya case who was unrepresented after dropping his earlier lawyer.

The top court had asked all the condemned prisoners to file their replies on Centre's plea.

Prakash had earlier appeared for convict Mukesh Kumar Singh, who had challenged rejection of his mercy plea by the President. The top court had dismissed his plea.

The top court had earlier granted liberty to authorities to obtain a fresh date for execution of the death warrants from the trial court, saying pendency of Centre's and Delhi government's appeals before it "will not be an impediment".

The trial court had on January 31 stayed "till further orders" execution of the four convicts on the ground that they are yet to avail of all their legal remedies. Two death warrants have been stayed so far in the case.

The Delhi High Court has said that all the four convicts in the Nirbhaya case have to hanged together and not separately.

Mehta had earlier told the apex court that authorities were "struggling to execute them" despite the appeals of the convicts being dismissed by the top court in 2017. He had said that the court has to keep in mind the impact of this situation on the society.

On December 16, 2012, a 23-year-old physiotherapy intern, who later came to be known as 'Nirbhaya' (fearless), was gang raped and savagely assaulted in a moving bus in South Delhi. She died after a fortnight.

Six people, including the four convicts and a juvenile, were named as accused. Ram Singh, the sixth person, allegedly committed suicide in Tihar jail days after the trial began.