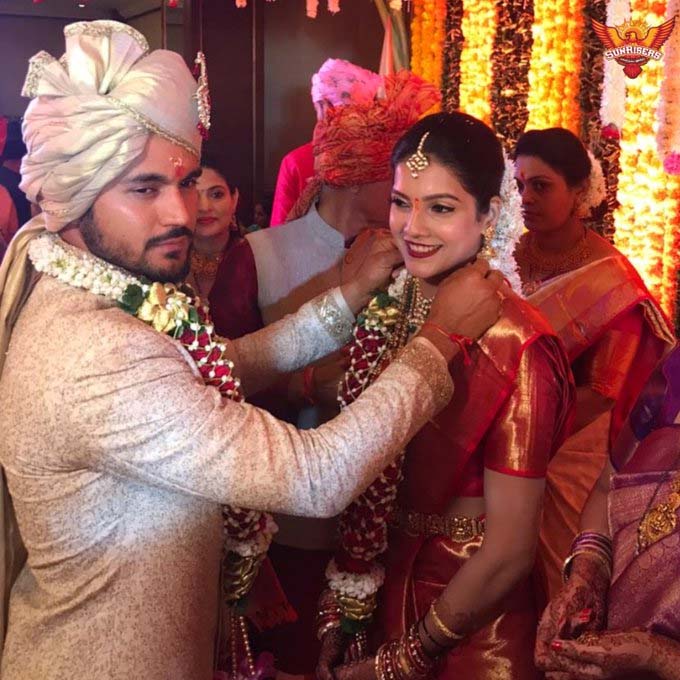 New Delhi: Hours after leading Karnataka to the title in the Syed Mushtaq Ali Trophy on Sunday, India batsman Manish Pandey headed to Mumbai to get married to Ashrita Shetty.

26-year-old Ashrita is an actress in southern film industry, who made her debut in the 2012 Tulu film, "Telikeda Bolli".

Manish in fact made the news known at the post-match presentation ceremony on Sunday when he said that ahead of the limited-overs series against West Indies, he had the marriage test on Monday.

"Looking forward to the India series, but before that there is another important series for me, I am getting married tomorrow," he smiled.

Manish played a key role in the final against Tamil Nadu and hit a 45-ball 60 to help Karnataka post 180. Tamil Nadu fell 1 run short in the chase.

As for Ashrita, she has worked in four other films over the past seven years - "Udhayam NH4", "Oru Kanniyum Moonu Kalavaanikalum", "Indrajith" and the unreleased "Naan Than Shiva".

Before her film debut, Ashrita participated in a beauty contest aimed at selecting a fresh face for a cosmetic care brand in 2010. She won the contest, which opened up doors for a stint in TV commercials.

Around this time, she was signed up to play a lead role in Manimaran's 2013 Tamil romantic thriller "Udhayam NH4", opposite Siddharth. The film featured Kay Kay Menon in a pivotal role.

She was last seen in the 2017 Tamil action drama "Indrajith" that had Gautam Karthik in the title role.

Vijay Hazare Trophy and Syed Mushtaq Ali Trophy won. But @im_manishpandey still has a lot to look forward to.

Wishing good luck, happiness and lots of love to @im_manishpandey and Ashrita 🥰

Idukki: At least 20 bodies have been recovered so far from the debris of the landslides that flattened a row of 20 houses of tea estate workers in the high range Idukki district in Kerala, as efforts were underway amid continuing rains to locate those missing.

"On Friday night we had recovered two bodies. Today we retrieved two more. With this the toll has gone up to 20.

There was some confusion regarding the total number of persons at the location at that particular point of time. It seems like some people were not present and some had come visiting," Idukki District Collector H Dinesh told PTI.

As per the records available with the district administration, 46 people are still missing. He added that 12 people were rescuedon Friday and are receiving treatment.

"Two teams of NDRF, besides the police and fire force officials are conducting search operations. They are working despite the bad weather that has affected the communication services and the electricity in the region..," Devikulam Sub- collector Prem Krishnan told the media.

The picturesque landscape of Pettimudi was flattened into a rough patch of boulders and mud with parts of asbestos and tin sheets seen scattered around.

The incident is said to have occurred in the wee hours of Friday when a huge mound of earth fell on the "row houses" and two children and five women were among the deceased, most of whom were plantation workers from neighbouring Tamil Nadu.

In the four-month-long Southwest monsoon season, which began in June first week, Kerala has reported a total of 51 deaths till Thursday night due to various incidents of drowning, landslides, and tree fall.

Meanwhile, the weatherman on Saturday issued a red alert for four districts in the state, namely the disaster-hit Idukki, Wayanad, Thrissur and Palakkad district.

According to the State Disaster Management Authority, Kerala received an average rainfall of 95 mm in the last 24 hours while Vadakara in Kozhikoderecorded 32.7 cms of rain, the heaviest in the state.

Vaythiri in Wayanad received 19.3 cms of rain while Peerumedu in Idukki district 18.5 cms.

Thealert is also issued on August 9 to Malappuram, Kozhikode, Wayanad, Kannur, Kasaragod and Idukki. Yellow alert was issued to other districts on Saturday and Sunday.

Beijing: The incubation period of COVID-19, which is the time after which those infected with the novel coronavirus start showing the first symptoms, could be as much as eight days -- longer than previous estimates of four to five days says a new study which involved the largest amount of patient samples to date in such an analysis.

The Indian Ocean island of Mauritius declared a state of environmental emergency late Friday after a Japanese-owned ship that ran aground offshore days ago began spilling tons of fuel.

Aviation regulator DGCA had issued a show-cause notice to the director of the Kozhikode airport on July 11 last year after it found "various critical safety lapses" in different places, including the runway and the apron, officials said on Saturday.