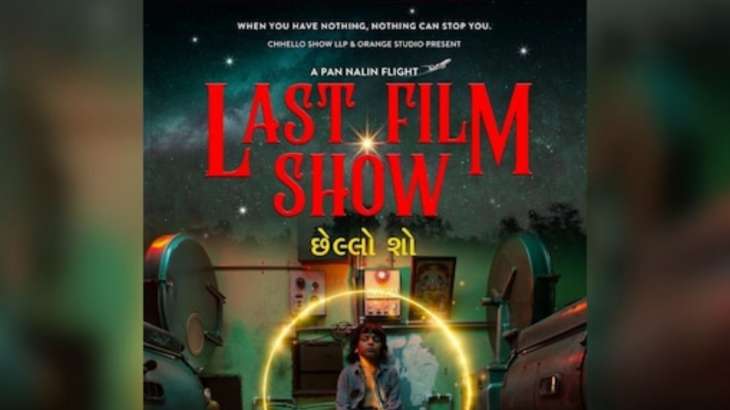 New Delhi, Sep 20: Gujarati film "Chhello Show", a coming-of-age drama about a young boy's love affair with cinema in a village in Saurashtra, is India's official entry for the 95th Academy Awards, the Film Federation of India (FFI) announced on Tuesday.

Titled "Last Film Show" in English, the Pan Nalin-directorial will release in theatres countrywide on October 14.

"The 17-member jury unanimously chose 'Chhello Show'. There were a total of 13 films of different languages including six in Hindi -- 'Brahmastra', 'The Kashmir Files', 'Anek', 'Jhund", "Badhaai Do' and 'Rocketry' -- and one each in Tamil ('Iravin Nizhal'), Telugu ('RRR'), Bengali ('Aparajito') and Gujarati ('Chhello Show') as well as few others," Aggarwal told PTI.

The story is inspired by Nalin's own memories of falling in love with movies as a child in rural Gujarat.

In a press note, the FFI said, "Chhelo' Show" is a film that transcends the banal narrative of the regular Indian reality shown abroad and touches the emotional chords of every film buff around the world.

"It showcases the Indian nuances and heritages subtly and truthfully which be an eye opener for the foreign audience.It begins innovatively and ends with a ray of hope," it said.

Set in a remote rural village of Saurashtra, the film follows the story of a nine-year-old boy who begins a lifelong love affair with cinema when he bribes his way into a rundown movie palace and spends a summer watching movies from the projection booth.

Nalin, best known for directing critically-acclaimed films "Samsara", "Valley of Flowers" and "Angry Indian Goddesses", expressed his gratitude to the FFI and the selection jury.

"I could have never imagined such a day would come and bring light and celebration of light. 'Chhello Show' has been enjoying love from around the world but there was an ache in my heart that how do I make India discover it? Now I can breathe again and believe in cinema that entertains, inspires and enlightens! Thank you FFI, Thank you Jury," the director said in a statement.

It won multiple awards during its festival run, including the Golden Spike at the 66th Valladolid Film Festival in Spain where it also enjoyed commercial success during its theatrical run.

Roy Kapur said the team is thrilled and honoured with the film's selection for the Oscars 2023.

"There could not be a more apt time for a film like this one, that celebrates the magic and wonder of cinema and the theatrical experience. When cinema-going around the world has been disrupted by a pandemic, it reminds audiences anew of the first time they fell in love with the experience of watching a movie in a darkened cinema hall," the producer said.

The last Indian film that made it to the final five was the Aamir Khan-led "Lagaan" in 2001.

The 95th Academy Awards are scheduled to take place on March 12, 2023 in Los Angeles.

OMG! What a night this going to be! Gratitude to Film Federation of India and thank you FFI jury members. Thank you for believing in Chhello Show. Now I can breathe again and believe in cinema that entertains, inspires and enlightens! @LastFilmShow1 #ChhelloShow #Oscars