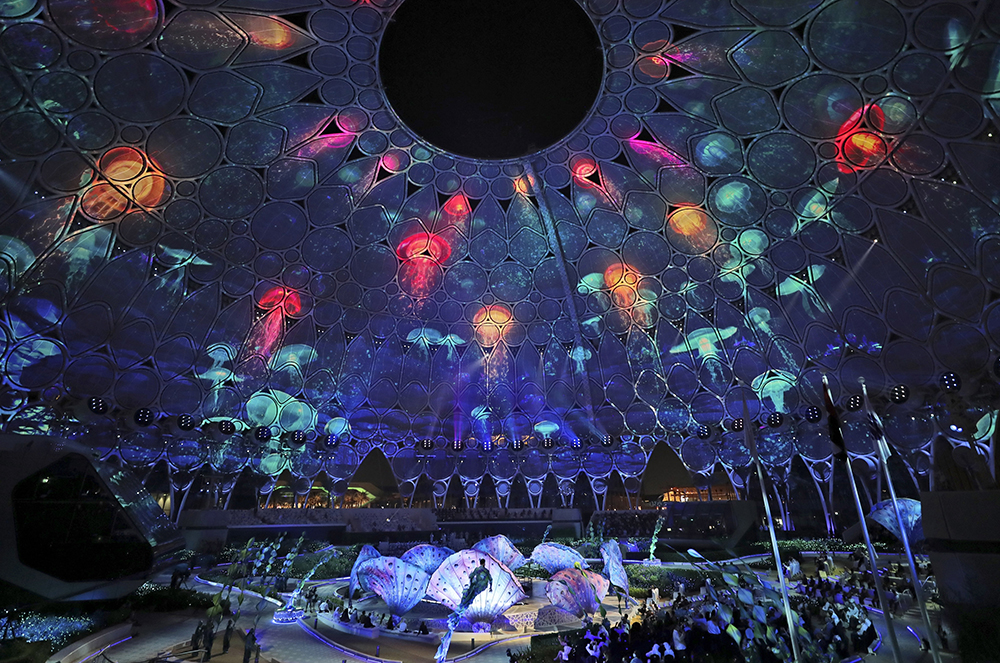 Dubai, Oct 1: After eight years of planning and billions of dollars in spending, the Middle East's first world's fair opened Friday in Dubai, with hopes that the months-long extravaganza will draw both visitors and global attention to this desert-turned-dreamscape.

The coronavirus pandemic pushed back Expo 2020 a year and could affect how many people flock to the United Arab Emirates. But the six-month-long exhibition still offers Dubai a momentous opportunity to showcase its unique East-meets-West appeal as a place where all are welcome for business.

Not long ago, the site of the 1,080 acre (438 hectare) Expo was barren desert. Now, it's a futuristic landscape buzzing with robots that dance and bark automated orders at bare-faced visitors to mask up, a new metro station, multi-million dollar pavilions and so-called districts with names like sustainability and opportunity" all built, like much of the Gulf, by low-paid migrant workers.

More than 190 nations are using their pavilions to spotlight their greatest tourist attractions, discoveries and ambitions.

The U.S. pavilion, paid for by the UAE after America struggled to come up with funding, boasts a replica of the Space X Falcon 9 rocket and takes visitors on a conveyor belt past multimedia infomercials for American inventions. It also displays a Quran that belonged to the nation's third president, Thomas Jefferson, as an example of how religious freedom is woven into the very fabric of American society.

China's vast, lantern-shaped pavilion focuses on the nation's space ambitions and future invention plans, featuring a Transformer-like car that SAIC Motor hopes will function one day also as a submarine and helicopter.

Draped over Italy's pavilion is 70 kilometers (40 miles) of rope made from 2 million plastic bottles. The main attraction, though, is a 3-D replica of Michelangelo's biblical hero, David, made from marble dust. The 5.2 meters (17 feet) high nude giant is not easily accessible visitors must must enter separate floors of a building to view it at eye-level or peer up from its feet. Public nudity is outlawed in the UAE, where traditional Muslim norms largely prevail.

The UAE's falcon-shaped pavilion, by far the site's largest, takes visitors on a two-hour-long immersive experience through dunes of real orange sand and footage from the country's 50-year history.

Other attractions include an African food hall, a royal Egyptian mummy, concerts and performances from around the world, and the option to dine on a 500 three-course meal with glow-in-the-dark cuisine.

Isabel Fu, 50, said she flew in for Expo all the way from Beijing to see the kind of changes that we'll see in the future, the technology that makes us look forward to the next era. Upon her return to China, she faces 21 days of quarantine.

Since first making a splash in London in 1851, world fairs have long served as an opportunity for nations to meet, exchange ideas, showcase inventions, promote culture and build business ties.

For more than a century, these global exhibitions have captured the imagination and showcased some of humanity's most important innovations. The first world's fair held in the United States in 1876 debuted Alexander Graham Bell's telephone, the typewriter, a mechanical calculator and Heinz Ketchup. One of its main buildings, Memorial Hall, is now a museum.

Other fairs introduced inventions like the sewing machine, the elevator, carbonated soda, the Ferris wheel and, in 1939 in New York, the television.

This year's Expo is unfolding as the virus continues to course across the world, with untold numbers still working and studying remotely and connecting to the world virtually. It's unclear how many visitors Dubai can attract, and how much the Expo will stimulate its tourism-driven economy especially in the blistering early autumn heat, which on Friday caused tempers to flare, some visitors to faint and most people to sweat through their shirts.

We're dying! Humans can't tolerate this weather, exclaimed 35-year-old Warda Abadi from Saudi Arabia as she shepherded her limping mother into the shade.

To enter the Expo site, visitors must show a negative PCR test or proof of COVID-19 vaccination.

Dubai's ruler and the force behind the emirate's transformation, Sheikh Mohammed bin Rashid Al Maktoum, described Expo 2020 as a chance to showcase the best of human excellence.

It offers a platform to forge a united worldwide effort to build a more sustainable and prosperous future for all of mankind, he told guests at the Expo's opening ceremony.

Sheikh Mohamed bin Zayed Al Nahyan, crown prince and de-facto ruler of the UAE's seat of power, Abu Dhabi, emphasized the ethos of this land as a meeting point for cultures and tolerance.

Whether Iran or Israel, every nation is welcome at Dubai's Expo. The space marked on maps for Afghanistan's pavilion, however, appeared vacant weeks after the Taliban takeover of Kabul.

It makes me very proud to see so many different kinds of cultures, countries and traditions coming to my country for the first time, said Isa Nuaimi, a 25-year-old government pilot from the Emirati city of Al Ain.

Human Rights Watch, however, said that the UAE's efforts to promote itself as an open and tolerant country remain at odds with a raft of human rights abuses, including the suppression of peaceful criticism, jailing of activists and pervasive government surveillance.

The UAE has embarked on a decades-long effort to whitewash its reputation on the international stage, the rights group said.

The Expo site will attempt to dazzle visitors with a centerpiece dome, marketed as the world's largest 360-degree projection screen.

Some world's fair structures remain iconic markers of the human journey and our industrial evolution. None more so than the Eiffel Tower, which was constructed in Paris, not only to be the tallest structure in the world at the time, but to serve as the entrance to the 1889 world's fair. The Space Needle in Seattle, Washington, built for the 1962 world's fair, also continues to enjoy global prominence.

While most fairs were held in Europe and the United States, none have been hosted in the Middle East until now.

Visuals from India's Pavillion at Dubai Expo 2020 in the United Arab Emirates pic.twitter.com/J7A12ZDJSb