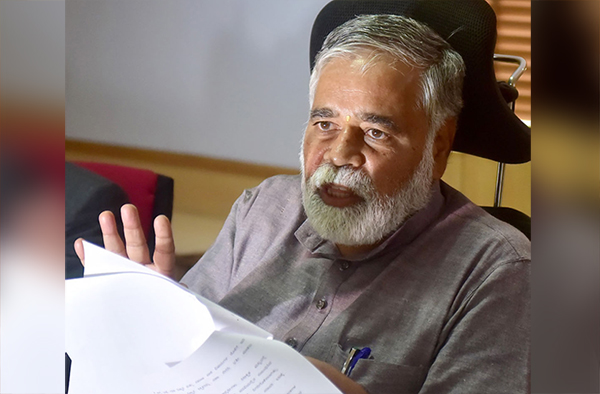 Bengaluru, May 23: Strongly defending the move to revise school textbooks, Karnataka Primary and Secondary Education Minister B C Nagesh on Monday alleged that confusion is unnecessarily being created among the people and students, along with attempts to create communal hatred by spreading falsehood.

Alleging that facts were distorted or hidden from the textbooks, especially from the history books earlier, to suit certain motives, he said when attempts are underway to put out actual facts, the "so-called self-declared intellectuals and education experts" and Congress leaders are unable to digest it, and hence are spreading lies.

"Those unable to digest the smooth functioning education department are spreading lies. It started with rumours that a lesson on Tipu Sultan was being omitted from the textbook, even before the textbook revision committee report came. Then, when the book went for printing, it was alleged that a lesson on Bhagat Singh had been dropped, despite my immediate clarification that no such omission had been made," Nagesh said.

Speaking to reporters here, he said false information was spread subsequently regarding the omission of chapters on Basavanna, Narayana Guru and now allegations of distorting facts on Kuvempu.

"Unnecessarily confusion is being created among the people and students, along with attempts to create communal hatred," he alleged, as he asked as to why no one questioned when certain chapters were omitted by the previous textbook revision committee headed by Prof. Baraguru Ramachandrappa, constituted by the previous Congress regime.

The controversy had erupted recently following objections raised by some organisations against inclusion of a speech by Rashtriya Swayamsevak Sangh (RSS) founder Keshav Baliram Hedgewar in the Class 10 Kannada revised textbook, allegedly by omitting a chapter on Bhagat Singh.

Clarifying on the omission of a chapter on Narayana Guru, the minister said there have been complaints from teachers regarding Class 10 history textbooks over burdening the students, since the Congress government's tenure under Siddaramaiah, as the syllabus cannot be completed in a year.

"So, we removed the chapter on Narayana Guru from history textbook and included it in the Kannada book as it is, while the chapter on Narayana Guru has remained as it is in Class 6 textbook," he said, noting that even senior politicians started spreading these lies on social media without even having gone through the textbook or knowing the facts.

Further stating that a chapter on Bhagat Singh has not been removed, Nagesh said information regarding other revolutionary freedom fighters like Chandra Shekhar Azad, Sukhdev, and Rajguru, have been added in the revised textbook.

"We are at least happy the Congress which had called revolutionaries as terrorists has started speaking about them," he said, pointing out that the previous textbook committee had reduced contents regarding chapters on Mysuru Maharajahs, while adding more information on Tipu Sultan.

"Why Congress leaders Siddaramaiah and D K Shivakumar were silent then?" the minister asked.

Admitting that the present committee has removed certain lines from a chapter on Periyar as it said Rama represents Vedic culture and Ravana represented Dravidian movement, he asked, "Should we teach our students such things?"

The minister said misinformation is being spread that Kuvempu has been disrespected in the textbook, while the fact is nothing in the said chapter was revised from what was earlier.

"We have in fact added a couple of chapters on Kuvempu and his writings like Ramayana Darshanam, while the previous committee had removed some chapters," he said, as he hit out at "so-called self-declared intellectuals and education experts."

At every step, Hindu history or historical figures were "avoided", he said, even in Kannada the word "Indian Ocean" was used instead of "Hindu Maha Sagara", as the ocean is called in the vernacular language, because it has the word Hindu in it.

Nagesh said the previous committee constituted by the Congress regime had removed chapters on B R Ambedkar, Mahatma Gandhi and distorted facts on Swami Vivekananda, while a chapter on Jawaharlal Nehru's letter to his daughter was added by removing lessons on "Sindhu Culture".

As much as 78 per cent textbooks had already reached students and the remaining will also reach soon, Nagesh further said, as he defended inclusion of Hedgewar's speech stating that the RSS founder dedicated his entire life for the nation, first beginning as a revolutionary and then with Congress.

Hedgewar came out of Congress as it associated itself with the Khilafat movement, and then founded the RSS to motivate youngsters for the cause of the nation, the minister further said.

Writers and thinkers with RSS background also have equal rights under the Constitution, like the Left and so-called secular intellectuals or thinkers have, he said.

The minister also strongly defended Rohith Chakrathirtha, the head of the current textbook committee, and hit back at his detractors pointing out that he was a professor teaching CET and IIT students.

Congress also hits back at Education Minister B C Nagesh on the micro blogging site twitter: