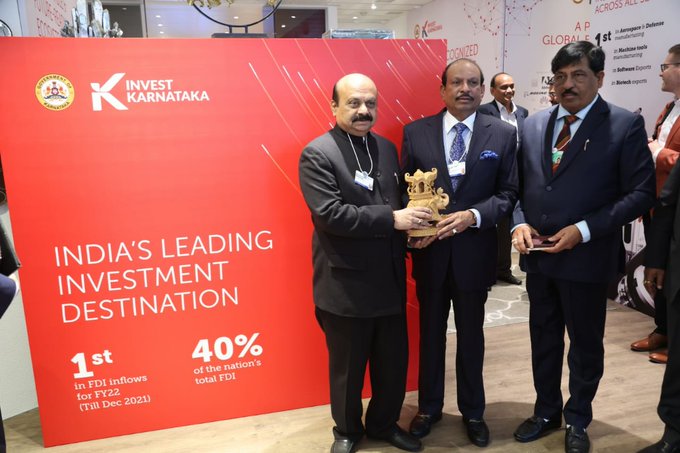 Bengaluru, May 23: Karnataka government on Monday signed a memorandum of understanding (MoU) with Lulu International Group for an investment of Rs 2,000 crore in the presence of Chief Minister Basavaraj Bommai at the World Economic Forum (WEF) meet being held in Davos, Switzerland.

It is also keen to establish export-oriented food units in Karnataka, and the projects are expected to create employment opportunities for 10,000 people, the Chief Minister's office said in a statement.

Bommai invited the Jubilant Group to explore the investment opportunities in pharma and FMCG sectors in Karnataka, and made a pitch for the FMCG Park being established in Dharwad and explained the incentive package being offered by the State to draw the investors to set up their units here.

Jubilant Food Works has decided to set up its centralised kitchen and Jubilant Biosys is keen to establish its R&D unit in a 10-acre plot at Devanahalli.

Presently, about 9,000 people are working with Jubilant in the State.

Meanwhile, Hitachi Energy conveyed its interest during the talks to set up an EV-charging infrastructure unit in the State.

The company has evinced interest to explore the opportunities in energy and digitalisation sectors considering the immense talent pool available in Bengaluru, the release said. The company is set to inaugurate its energy quality instrument unit at Doddaballapur, it added.

Hitachi Energy has its head office in Bengaluru and it is building a centre of engineering, which would engage about 2,000 engineers.

Noting that Siemens is taking up two projects in Bengaluru focusing on magnetic imaging and diagnostics and a health-related R&D project, the CMO said the company plans to lay the foundation stone for setting up a medical equipment manufacturing unit at Bommasandra in September 2022 to cater to the domestic market.

Bommai has been invited to the programme. The company currently has about 2,000 engineers.

The State government has assured the company of special incentives to set up its production unit for modern medical equipment, it said, adding that representatives of Siemens and the State government also discussed the 'Beyond Bengaluru' project to draw investments to Tumakuru, Hubballi-Dharwad and Mysuru cities.

According to the CMO, Dassault has evinced interest to invest in electric vehicles, modern production systems, industrial training for students in Digital 4.0 technology and Smart City project in Karnataka while Nestle has expressed its keenness to modernise and expand the Nestle Instant Coffee unit in Nanjangud.

Bommai launched the Karnataka pavilion at the WEF summit during the day and participated in a session on soil extinction, climate change and ecological degradation with spiritual leader Sadhguru Jaggi' Vasudev.

"The solution lies in linking nature to economics, i.e. eco-economics. Eco-budgeting has to be there in the balancesheets of all businesses," the Chief Minister said in a tweet.

#Karnataka signed an MoU with #LuluGroup for establishing shopping malls, hypermarkets and export oriented food stores. These malls will be set up in #Tier2 cities and will generate 10,000+ employment opportunities. #WEF2022 #KarnatakaAtDavos #BuildForTheWorld @LuLuGroup_India pic.twitter.com/4XLk2KIB10