Why not "elephant foeticide", asks Karnataka BJP MLA upset by pachyderm menace in his constituency 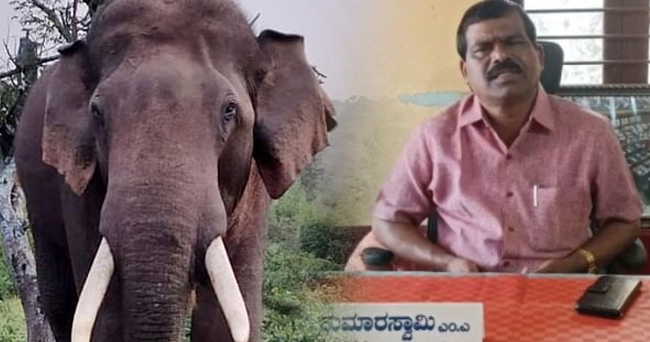 Bengaluru, Sep 22: A Karnataka MLA on Thursday suggested "elephant foeticide" as he lamented about the sufferings caused to people and farmers in his constituency by the pachyderm menace.

The Legislative Assembly discussed the issue of rampant elephant menace in several parts of the State, especially in Mudigere in Chikkamagaluru district.

As several other legislators, too, highlighted troubles caused by elephants and other wild animals in their constituencies, Speaker Vishweshwar Hegde Kageri suggested the government to form a high-level expert committee regarding the measures to be taken, and to act upon them.

Responding to the issue raised by Mudigere MLA M P Kumaraswamy, Minister Shivaram Hebbar, on behalf of the Chief Minister, noted that one elephant especially named "Mudigere Byra" was creating a lot of trouble in the region and instructions have been given to capture it and teams have been formed in this regard.

Noting that six people have died in his constituency so far due to elephant menace as their numbers were increasing, Kumaraswamy said, "Elephant population is increasing, their foeticide aimed at bringing down their numbers or shifting them to other places is also not happening."

"Yesterday, two elephants destroyed the property belonging to the tribal community in Kalasa, when will this menace end? Bring down their number or shift them or make elephant corridors...people are angry at us (public representatives), they are asking us whether we want them or forest animals," he said.

He also sought compensation to those farmers, who couldn't take up sowing due or agriculture activities due to elephant menace.

Responding to him, Hebbar said since 2000, so far 74 elephants have been shifted from Mudigere.

Explaining about the measures taken by the government, he said, so far compensation was Rs 7.5 lakh; the Chief Minister has now increased to Rs 15 lakh. Also he has announced that crop loss compensation will be doubled.

"Further, in Hassan sector, 9.5 km of rail fencing work has been completed, it will be extended to another 7 km, a total of Rs 100 crore has been given this year and more funds will be given. Also, radio collars are being installed to elephant necks to track them," the Minister said.

He also made it clear that there is no proposal or plan before the government for elephant foeticide; it is not possible either.

Noting that shifting of elephants won't help as it will be leading to trouble in other areas, another BJP MLA Appachu Ranjan suggested that the forest department look at planting more food or fruit bearing trees in the forest instead of teak and mangium trees.

Hanur MLA Narendra said thousands of elephants are in Chamarajanagara district, adding to that elephants creating trouble in other parts of the State are being shifted there, leading to extreme menace there.

Intervening, Vishveshwar Hegde Kageri, too, highlighted that farmers and people living in regions near forest areas are facing a lot of trouble due to elephants and other wild animals, both in terms of lives and properties.

He also asked the government to form a high-level expert committee and take a report from them to address this issue and act accordingly, or else farmers cannot grow crops.