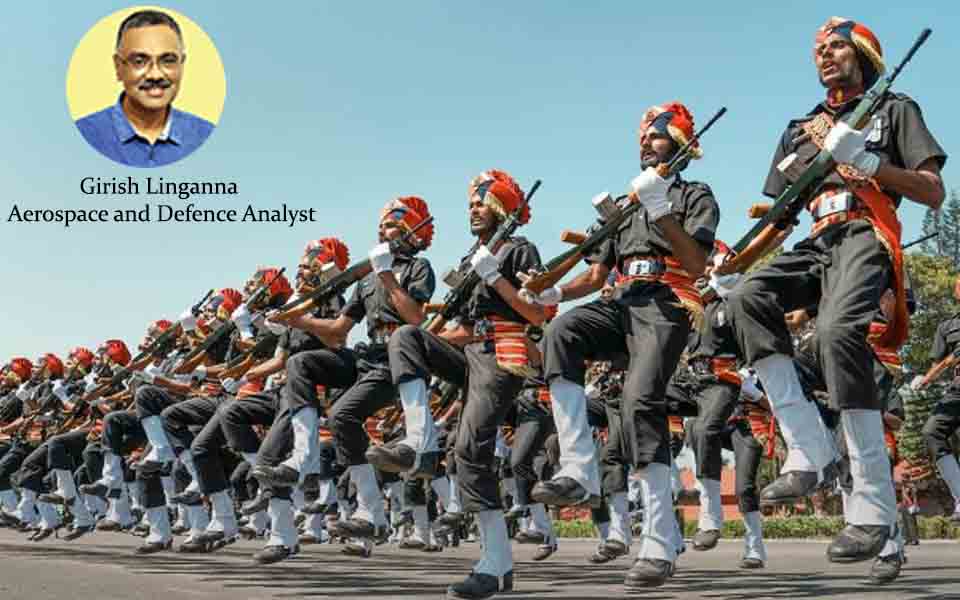 Major General Ravi Murugan, who serves as the General Officer Commanding (GOC) for the Karnataka and Kerala sub region, revealed to the media at the Madras Engineering Group (MEG) & Centre in Bengaluru that the Union Defense Minister Rajnath Singh will be the primary guest at the event. He mentioned that the MEG & Centre will be the location of the Army Day parade and will function in that capacity.

There will be eight marching contingents, one of which will be an Army Service Corps horse-mounted contingent. Additionally, there will be a military band that will be comprised of five regimental brass bands. Each of these contingents symbolises a different regiment, each of which has an illustrious history and unique traditions. As part of its support for the Army Day Parade, Army Aviation's Dhruv and Rudra helicopters will execute a fly-by.

Parades, the awarding of medals, and military and cultural performances are all part of the celebrations in New Delhi and at other Army Command headquarters on this day.

In 1945, India attained its status as a sovereign nation, more than two centuries after achieving independence from British dominance. Because of the large number of Pakistani refugees and migrants entering the country at the time, there was tremendous instability and unrest across the nation.

An intervention by the military was required due to the administrative instability to handle the situation and establish peace during the country's partition. At this juncture,  Field Marshal Kodandera M. Cariappa was made in charge of the country's military.

In 1899, Field Marshall Cariappa was born in the Indian state of Karnataka. His father, Madappa, worked in the revenue department at one point in time. Along with Sam Manekshaw, Cariappa was one of the army officers who was promoted to the rank of Five-Star Field Marshal after achieving that rank. In addition to being the first Indian commander-in-chief and one of the army's five-star generals, Cariappa's history also includes the fact that he was one of the first members to join the Indian Air Force when it was originally established.

In 1925, Field Marshal Cariappa toured Europe, the United States, Japan, and China, among other places. The visit proved instructive for him as he encountered a large number of military and civilians from many countries. While stationed in Fatehgarh, a British officer's wife gave him the moniker " *Kipper* ," which Field Marshal Cariappa found difficult to pronounce. Field Marshal Cariappa was promoted to captain in 1927, but the promotion was not publicly announced until 1931.

In 1947, Field Marshal Cariappa was the first Indian to enrol in a training programme at the Imperial Defence College in Camberly, United Kingdom. Field Marshal Cariappa was appointed as the Deputy Chief of General Staff with the rank of Major General upon India's independence. Upon the commencement of the war in Pakistan, he was promoted to Eastern Army Commander and General Officer Commanding-in-Chief, Western Command.

During the 1947 Indo-Pakistan War, he commanded the country's western forces before being promoted to Army Chief. He played a vital part in retaking numerous Kargil territories, which was a great accomplishment.

Field Marshal Cariappa stepped down from his position as commander-in-chief on January 14, 1953, having served in that capacity for four years. Before his retirement, he paid a farewell visit to the Rajput Regimental Centre, the home of his parent regiment, the Rajput Regiment. After he retired, he took up the role of Indian high commissioner to Australia and New Zealand and remained in that position until 1956.

The " Order of the Commander-in-Chief of the Legion of Merit " was bestowed on him as a symbol of recognition. In 1993, he reached 94 when he passed away in Bangalore. The efforts of this Man of Principals are being recognised via the celebration of Indian Army Day. He was revered for the compassion and self-control for which he was known. Through his selfless acts of patriotism, he served as a model for many generations.

Bengaluru-headquartered HAL plans to produce more than 1,000 helicopters in the range of 3-15 tonne with a total business of more than Rs 4 lakh crore over a period of 20 years at this facility in Gubbi taluk, officials said.

The factory, spread across 615 acres for which the Prime Minister laid the foundation stone in 2016, would initially manufacture Light Utility Helicopters (LUH)).

It will enable India to meet its entire requirement of helicopters without import and giving much-needed fillip to the Prime Minister's vision of 'Aatmanirbhar Bharat' in helicopter design, development, and manufacture, they said.

Defence Minister Rajnath Singh, Karnataka Chief Minister Basavaraj Bommai and senior officials of Ministry of Defence were among those present on the occasion.

"It is a dedicated new greenfield helicopter factory which will enhance India's capacity and ecosystem to build helicopters," Singh said.
Assembly polls in Karnataka are due by May.

PM Modi unveiled the LUH, which has been flight tested. The LUH is an indigenously designed and developed three-tonne class, single-engine multipurpose utility helicopter. Initially, the factory will produce around 30 helicopters per year and can be enhanced to 60 and then 90 every year in a phased manner, according to the Defence Ministry.

The factory will be augmented to produce other helicopters such as Light Combat Helicopters (LCHs) and Indian Multirole Helicopters (IMRHs). It will also be used for maintenance, repair and overhaul of LCH, LUH, Civil Advanced Light Helicopter (ALH) and IMRH in the future.

Potential exports of civil LUH will also be catered to from this factory, which is being equipped with state-of-the-art Industry 4.0 standard tools and techniques for its operations, officials said.

The proximity of the factory, with the existing HAL facilities in Bengaluru, will boost the aerospace manufacturing ecosystem in the region and support skill and infrastructure development such as schools, colleges and residential areas, it was noted.

Speaking at inauguration of HAL manufacturing facility and other development works in Tumakuru, Karnataka. https://t.co/3EXjZG3IkB