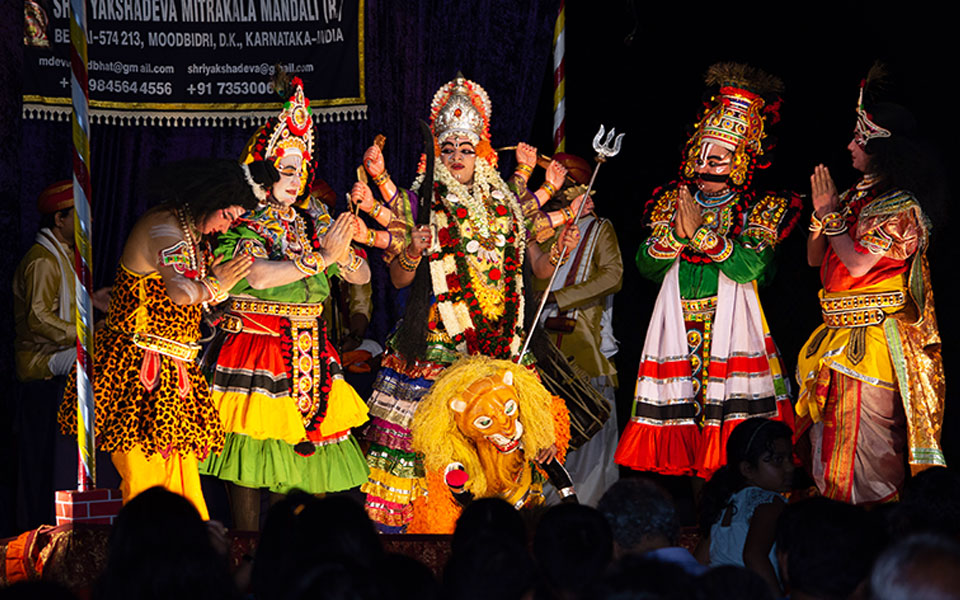 Yakshagana Performance in its original form is truly a mesmerising experience. Through the night air there come the tense high-pitched drumming beats of the chande, mellower rhythm of the maddale and the tinkling brass peal of the tala accompanying the melodious singing of the story-teller the “Bagawatha”. Yakshagana is a rare and unique traditional theatre of Coastal region of Karnataka state in India and has a recorded history of more than five centuries. It is a rich artistic blend of loud music, forceful dance, extempore speech and gorgeous costumes, this art combines the features of opera as well as drama, the characteristics of moral education and mass entertainment.

Vasu Aithala and a team of Yakshagana enthusiast from Houston brought this unique mind blowing experience to Houstonians on Saturday, July 28th. Under the auspices of Shri Krishna Vrundavana and Houston Kannada Vrinda, for the first time in USA, Yakshagana Bayalata (Open-air Field Drama) was presented in the parking ground in front of Krishna Vrundavana, Sugar Land, Texas by professional artists from “Sri Yakshadeva Mithra Kalamandali, Belvai, India touring US.

The Episode (Referred to as “Prasanga”) presented was “Mahisha Mardhini” from “Sri Devi Mahatme of Sri Durga Saptashati of Markandeya Purana. The everlasting conflict between good and evil, the fight between Gods and demons, depicting the supremacy of Mother Goddess Durga.

Beautifully set up open air stage imitating the traditional look referred to as “Rangasthala”, casual seating of the young audience on the floor fully captivated with the show, Vibrant entry of Demon Mahishasura (buffalo headed demon) playing with fire from the crackle and flash of resin powder thrown into fiery torches, grand entry of Goddess Durga with 8 arms, excitement of a tiger walking on to the stage from the audience as vehicle for Goddess Durga, fierce battle between Mahishasura and Goddess Durga ending with killing of Mahisha, celebrated with magnificent fireworks made this entire performance into a spectacular show.  The excitement became the true physical sensation.

More than 500 people both Kannada speaking and non-Kannada speaking including a significant number of children enjoyed the performance. Keeping up with the tradition hot snacks were distributed to the audience during the show. Depicting the street stalls, ladies prepared churmuri -chilli puffed rice.

Well known Bagavatha Patla Sathish Shetty was accompanied on Maddale by Padmanabha Upadhya and on Chende by the team leader Devananda Bhat. Prof. M.L.Samaga as Lord Vishnu, Chandrashekara Dharmasthala as Shurpashaka and Devendra, Prashant Nelyadi as Malini and Devi, Mohana Bellippady as Mahishusara and Mahesh Maniyani as Dootha were aptly supported by local artists Meena Aithala as AadiMaye, Sharath Akirekadu as Lord Brahma and Suhas Aithal as Lord Maheshwara.

In their own words:

Satish Rao of Udipi Café said “What a fantastic weekend! felt like I was back home in Hiriyadaka, Coastal town of Karnataka watching Yakshagana bayalata. One of a kind event to remember for a long time to come, it was an awesome show!!

Dinesh Pejavar said “Having it out door was a brilliant idea and brought back fond memories of the bayalata performance in Pejaver some 60+ years ago!

Tara Narasimhan said “It was like watching in the paddy fields of India as the weather too was just about the same...The fireworks in between – was added bonus to the Superb group of dancer’s musician and dramatists combined- a tiger walked on to the stage from the audience as vehicle for Mahishasuramardhini- spectacular...and Mahisha’s atrocious behavior was simply outstanding” 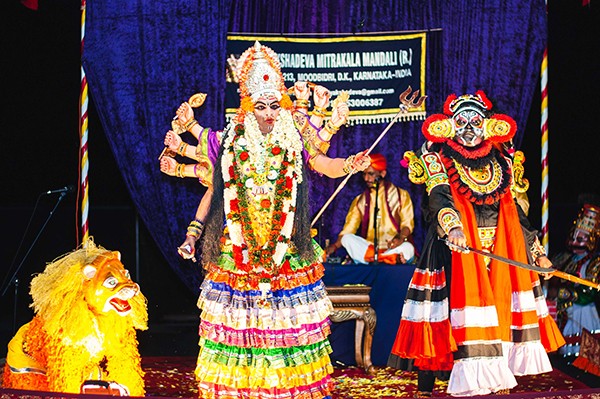 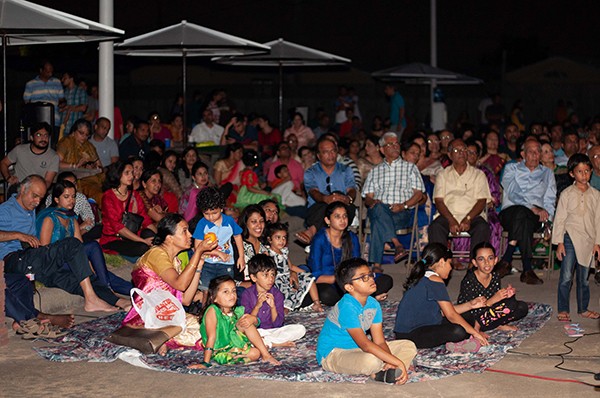