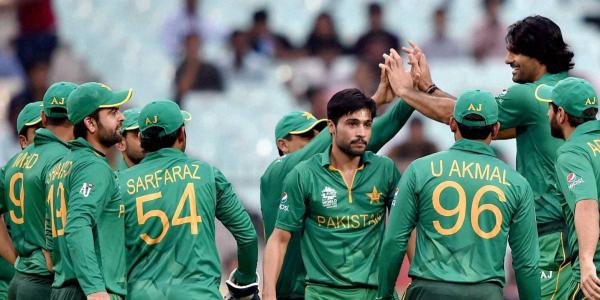 The host cricket board also alleged a breach of the bio-secure protocol by the visitors who have been asked not train in quarantine and issued a "final warning".

A jumbo 53-strong Pakistan squad, led by Babar Azam, arrived in New Zealand on Tuesday and is serving a mandatory 14-day quarantine period as per COVID-19 protocol.

"Two of these six results have been deemed 'historical'; four have been confirmed as new," NZC said in a statement without revealing the names of the players who have tested positive for the dreaded virus.

All six members of the squad will be moved to the quarantine arm of a managed isolation facility. Pakistan are here for three T20 Internationals and two Tests. The series begins December 18 in Auckland.

"As a consequence, the Pakistan team's exemption to train while in managed isolation has been put on hold until investigations have been completed," the NZC stated.

The home board also spoke of a protocol breach but did not specify the exact nature of it.

"Separately, NZC has also been made aware that some members of the Pakistan team had contravened protocols on the first day of managed isolation.

"We will be having discussions with the tourists to assist them in understanding the requirements," the NZC statement added.

According to New Zealand media, the Canterbury District Health Board's medical officer of health has sent a letter to the squad's management saying all team members must stay in their rooms until further adviced.

The breaches, reportedly caught on CCTV cameras, happened despite "clear, consistent and detailed communication of expected behaviours" according to a health ministry spokeswoman.

"It is a privilege to come to New Zealand to play sport, but in return teams must stick to the rules that are designed to keep COVID-19 out of our communities and keep our staff safe," Bloomfield was quoted as saying by stuff.co.nz.

"The team as a whole has been issued with a final warning," he said.

At least 10 Pakistan cricketers had tested positive for COVID-19 before the team's England tour earlier this year.

Prior to leaving Lahore, all members of the Pakistan squad returned negative results on the four occasions they were tested.

In addition to the senior squad, Pakistan's A team is also here to compete in a couple of four-day matches beginning December 10.

Lucknow: An FIR has been lodged here against the makers of web series 'Tandav' and Amazon's India head of original content for allegedly depicting Hindu gods in a manner hurtful to religious sentiments of the people.

According to the FIR, following public outrage expressed on social media platforms, the web series was viewed and it was found in the 17th minute of the first episode of the series that Hindu gods and goddesses have been presented in an "undignified manner' and shown using language which is hurtful to religious sentiments.

Dialogues in the web series can incite caste anger, the FIR alleged.

It also alleged that the person occupying the high post of Prime Minister of India has been portrayed in a very belittling manner besides there are scenes in which castes have been presented as low and high and women in an insulting manner.

The FIR further alleged that intent of the web series is to incite religious sentiments of a particular community and create enmity among classes.This act of the producer-director has hurt and incited religious and caste sentiments of the people, the FIR added.

Taking cognizance of complaints that Hindu gods and goddesses have been ridiculed in the web series, the Ministry of Information and Broadcasting had on Sunday sought an explanation from streaming platform Amazon Prime Video on the issue, sources had said.

"The ministry has taken cognizance of the matter (complaints) and asked Amazon Prime Video to explain," a source in the ministry had said.

Kotak, the MP from Mumbai North-East, said different organisations and individuals have complained that Hindu gods and goddesses have been ridiculed in the 'Tandav' web series.

When contacted about the complaints, Amazon Prime Video PR had said the platform "won't be responding" on the matter.

The government recently brought OTT platforms such as Netflix, Amazon Prime Video and Disney+ Hotstar, besides other online news and current affairs content, under the ambit of the Ministry of Information and Broadcasting, giving it powers to regulate policies and rules for the digital space.

The National Accreditation Board for Hospitals and Healthcare Providers (NABH) has granted NABH accreditation to Unity Hospital, with effect from December 2, 2020, which is valid up to December 1, 2023.