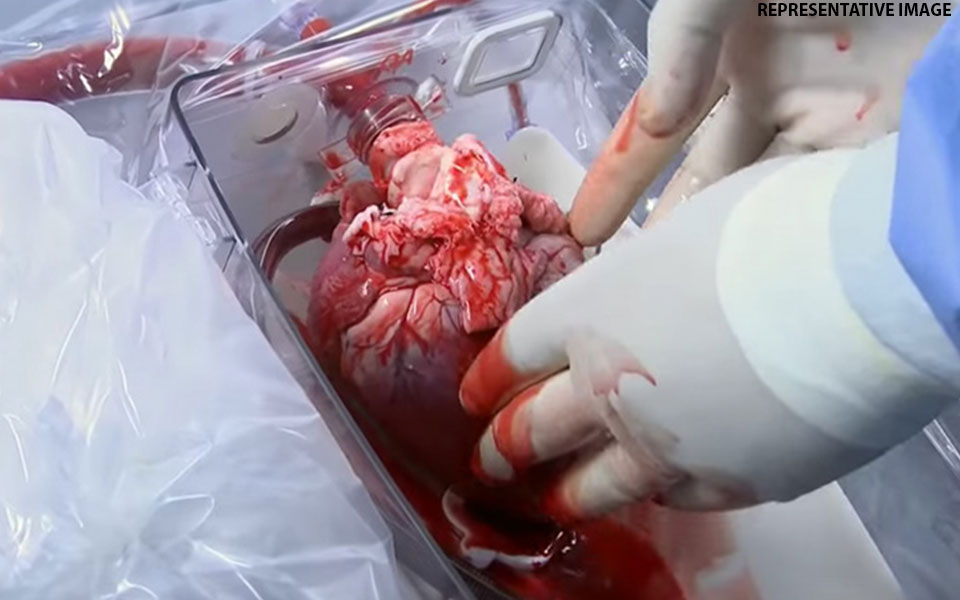 Kolkata, May 21: In what is claimed to be the first human-to-human heart transplant in eastern India, surgeons in a Kolkata private hospital on Monday transplanted the heart of a 21-year-old man who died in Bengaluru a day back on a 39-year-old patient from Jharkhand.

"This operation is being performed for the first time in the eastern region. This is a very major operation, we cannot comment on the outcomes now," said a hospital official.

The heart of 21-year-old man who died on Sunday in Bengaluru was flown to Kolkata and a green corridor was created for the heart to reach the hospital from the airport.

It reached the hospital very quickly in the peak hours when the city witnesses thick traffic.

According to the hospital officials, it was a very well-coordinated effort and the heart reached the hospital in just 18 minutes through the green corridor.

"We are very thankful to the traffic police and state administration that we got the heart here in 18 minutes," said a Fortis Hospital official.

The recipient is Dilchand Singh, 39, a patient of dialectic cardio-myopathy, who needed urgent replacement. The man hailing from Jharkhand has been admitted in Fortis since last few weeks.

The blood group (A-positive) of the deceased and the recipient matched, thereby making the transplant possible.

The operation went on for almost three hours. A team of trained doctors performed the complicated surgery.

After the operation, the patient is being kept under strict vigilance and his condition will be monitored regularly for the post-operative treatment.

"The heart was harvested at 7 a.m and by 11 a.m, it was here in the hospital. The state administration has helped us in the necessary documentation and providing us the green corridor," the official said.

"It is a moment of pride for our hospital and we are very much confident of the outcome. I am very much optimistic about the success of the operation," he added.

The video shows Kataria -- who has 6.3 lakh followers on Instagram -- lighting a cigarette on one of the back rows of a SpiceJet plane.

SpiceJet said that the smoking incident took place in its Dubai-Delhi flight on January 20 when passengers were boarding the plane and the cabin crew members were busy with completing the on-boarding procedure.

After investigation, the airline had put the passenger on "no flying list" for 15 days in February, it mentioned.

As per the regulations of aviation regulator DGCA, an airline has the power to ban an "unruly" passenger for a certain period of time if he or she violates any rules.

When the video of this incident was posted on Twitter on Thursday, Scindia responded: "Investigating it. There will be no tolerance towards such hazardous behaviour."

Sources from the Central Industrial Security Force (CISF) said on Thursday that the video of this incident came to their knowledge in January this year and they had then written to the concerned airline and subsequently sent a complaint to the police in Gurugram.

"We understand the police filed a complaint against him there (in Gurugram)," one of the CISF source said.

In a statement, SpiceJet said: "This is with reference to a video on social media of a passenger smoking onboard a SpiceJet aircraft. The matter had been investigated thoroughly in January 2022 when the video was brought to our notice and a complaint had been filed by the airline with the Udyog Vihar Police Station in Gurugram."

The video, the investigation had revealed, was shot on January 20, 2022 while passengers were boarding flight SG 706 scheduled to fly from Dubai to Delhi, it said.

"The said passenger and his co-passengers shot the video on the 21st row when the cabin crew were occupied with completing the on-boarding procedure. None of the passengers or crew was aware of the act. The matter came to the airline's notice on January 24, 2022 through social media posts," it said.

"The matter was referred to the Internal Committee constituted as per the provisions of Civil Aviation Requirements (CAR) on handling of unruly passengers (not consisting of any SpiceJet employee). The said passenger was put on a no flying list by the airline for 15 days in February 2022," the carrier said.

Observing that freebies and social welfare schemes are two different things, the Supreme Court on Thursday said a balance has to be struck between the economy losing money and welfare measures.